Following their stay at Grand Hotel Tremezzo, Bella Thorne and her fiancé Benjamin Mascolo showed up at the 2021 amfAR Cannes Gala held at Villa Eilenroc in Cap d’Antibes, France. The event raises funds for life-saving research programs in the fight against AIDS. 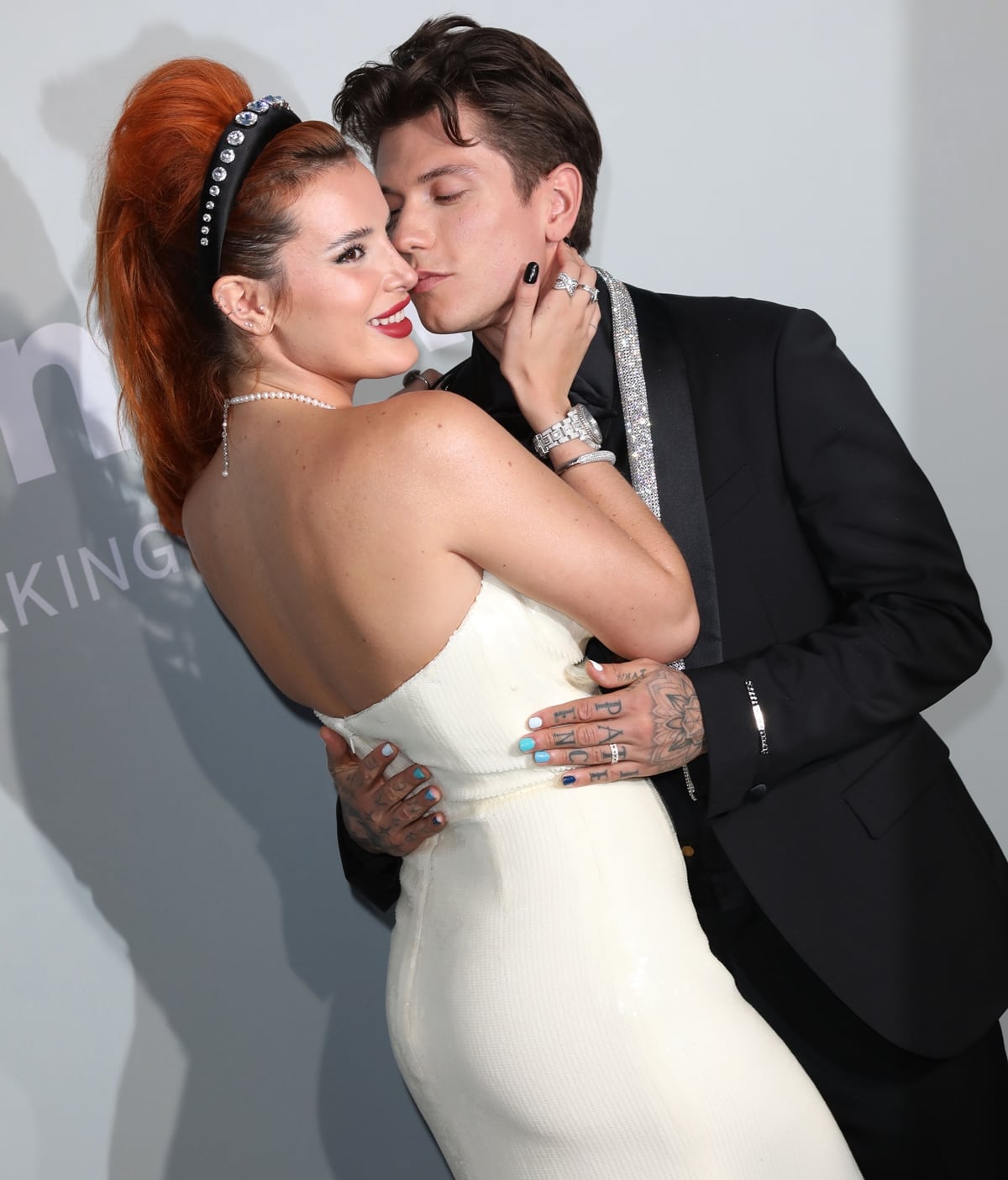 Wearing a tacky strapless Miu Miu sequined dress, the “My Own Worst Enemy” actress completed her look with black crystal-embellished sandals, a studded headband, two diamond-encrusted watches from Audemars Piguet and Rolex, and a pearl necklace with crystal ‘Ben’ lettering in reference to her fiancé. 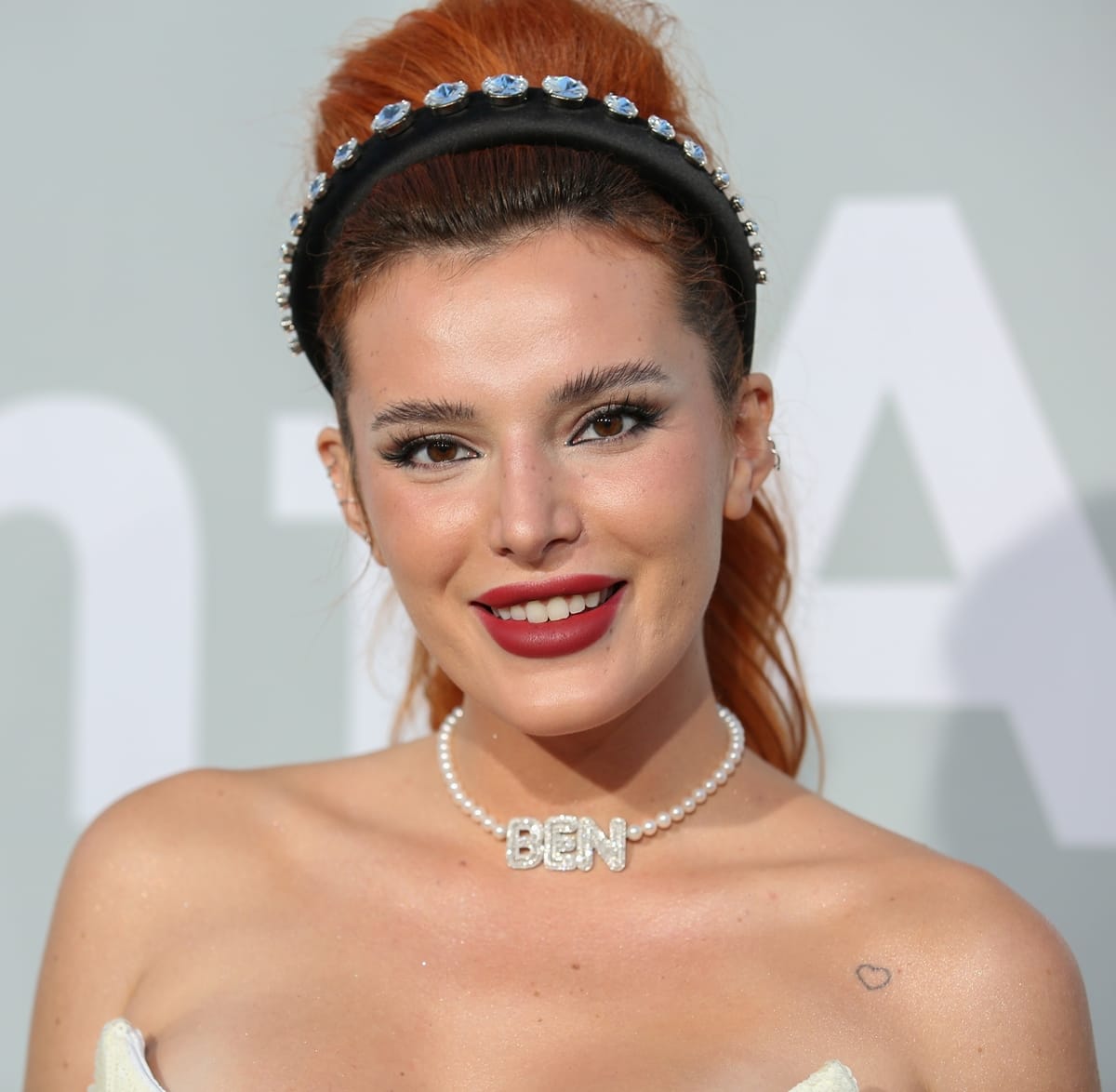 “I immediately knew she was different from all the other women I met in my life,” Mascolo told Icon Magazine about meeting Bella Thorne in 2019 at The Coachella Valley Music and Arts Festival held at the Empire Polo Club in Indio, California.

“About one year ago, out of the blue you landed like a UFO alien in my very normal Italian pop star life and f****d up all the plans I had for an outrageous Coachella weekend and summer in Ibiza and Mykonos. Safe to say this was no doubt the best thing that ever happened in my life, I’m forever grateful to you my beautiful little girl, god bless the moment I put aside my shyness to randomly text you and say ‘let’s hang out,’” he wrote in Instagram in April 2020.

“The nicest thing Bella did for me was making me believe in myself … a lot of things I thought I could never do, I’m learning now because she got me started. In music, in life. She gave me the gift of believing in myself,” he revealed in an interview with Vanity Fair Italia.

A few years older than his girlfriend, Benjamin Mascolo performs as a solo artist under the name B3N and is also one-half of the Italian pop duo Benji & Fede (with Federico Rossi). 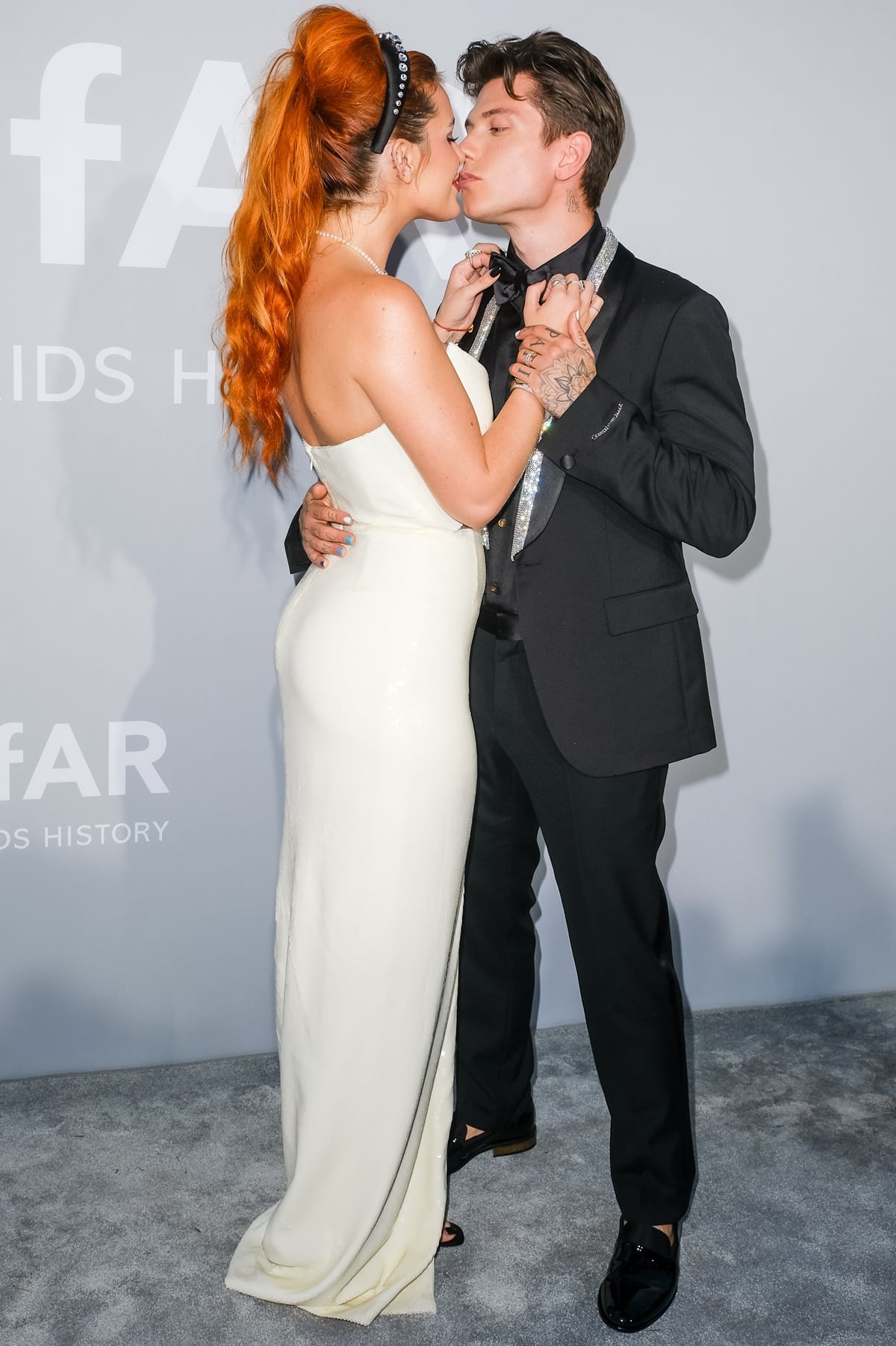 In August 2015, Bella Thorne looked sensational in a strapless mini at the 2015 Teen Choice Awards held at the USC Galen Center in Los Angeles. 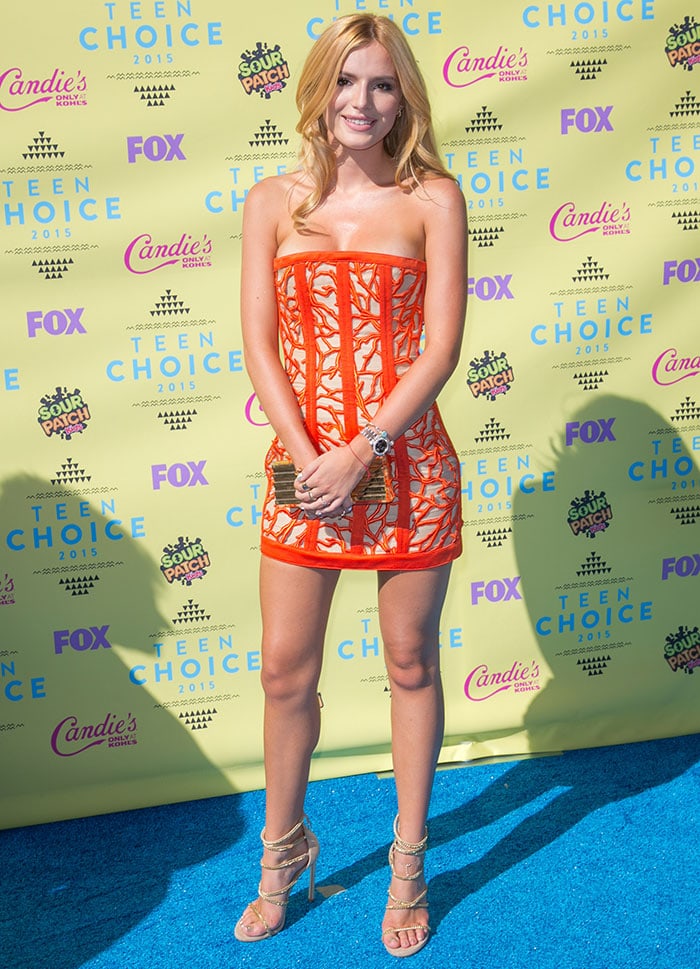 She brought along her boyfriend, Gregg Sulkin, who opted for a casual white v-neck tee, black pants, a jacket, and a pair of Emporio Armani hi-top sneakers.

Bella Thorne and British actor Gregg Sulkin split in August 2016 after over a year of dating. They started their relationship in May 2015.

“After much thought and soul-searching, we have made the difficult decision to end our relationship. We will always love each other and have a deep respect for one another, as we have each grown to be better people because of our time together. Our schedules made seeing each other difficult, and we decided that for now this would be best,” the couple said in a statement. 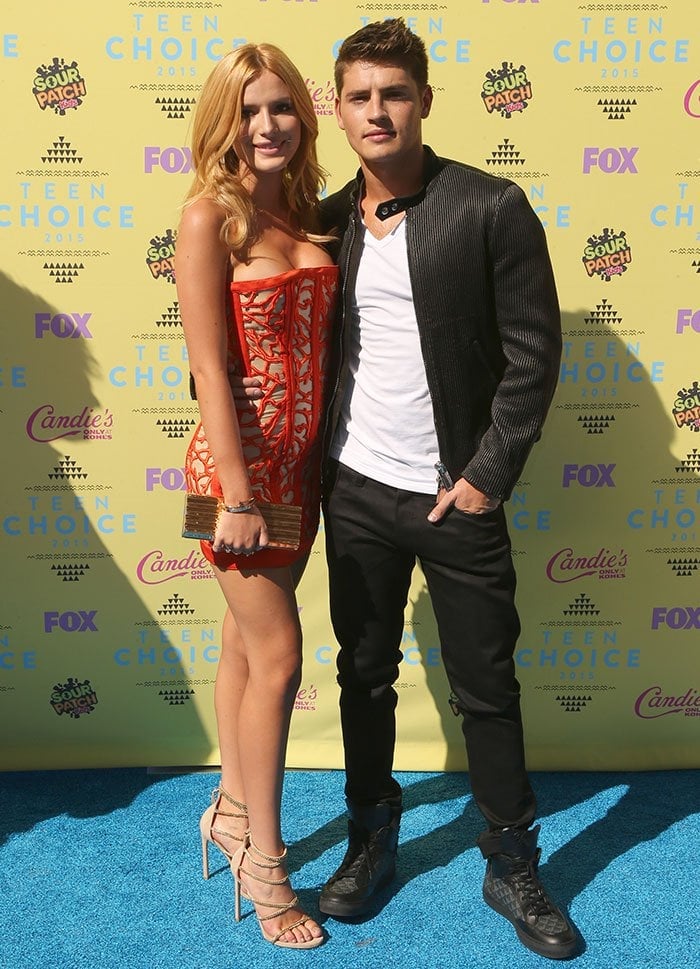 Bella Thorne and Gregg Sulkin split in August 2016 after over a year of dating (Credit: Brian To / WENN)

The then 17-year-old actress had been embracing a bolder and more daring sense of style.

While Gregg played it simple and casual, Bella went bold in a summery orange strapless dress from Balmain’s Resort 2016 collection. 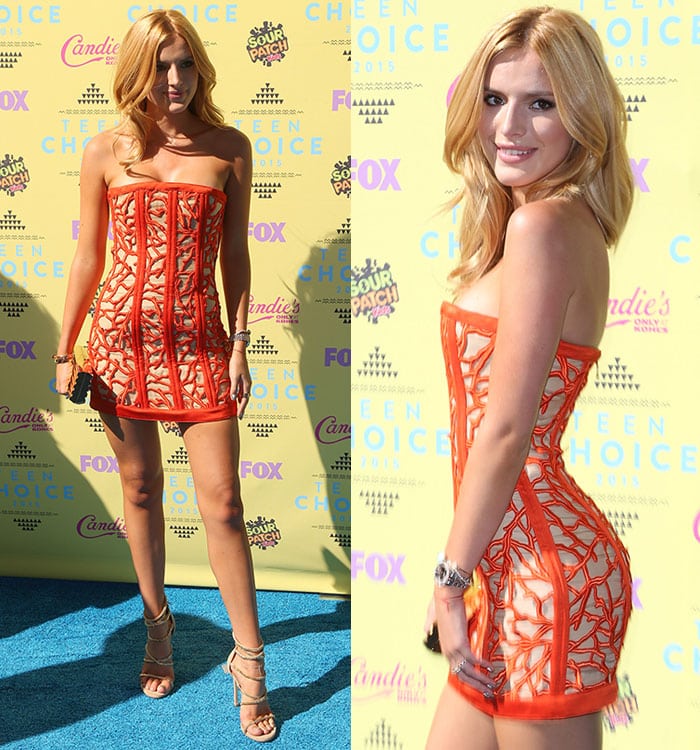 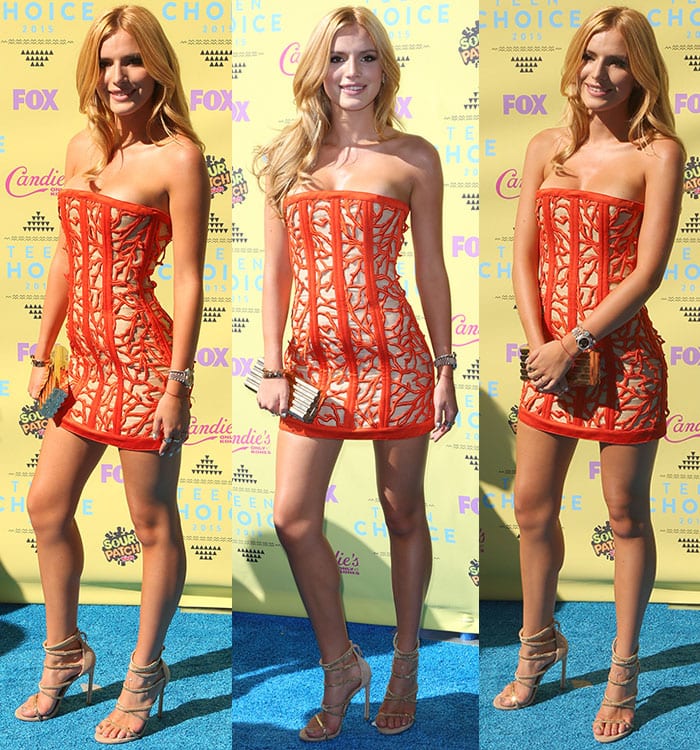 Zendaya’s childhood friend wore her blonde locks down in loose tumbling waves and kept her makeup simple with pink lipstick. 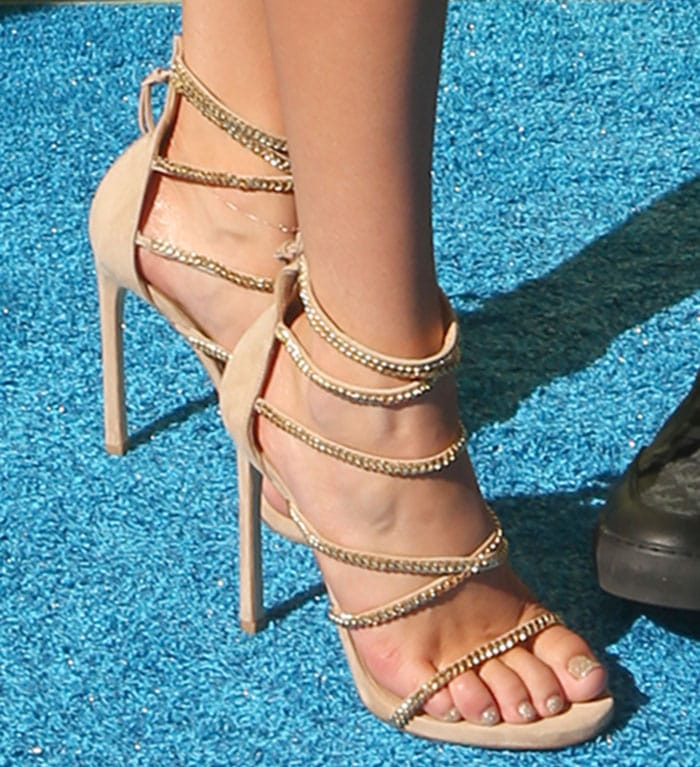 Bella’s “XChain” heels are made of nude suede and feature slim chain-embellished crisscross straps, back zipper fastenings, open toes, and about 4.5-inch heels. 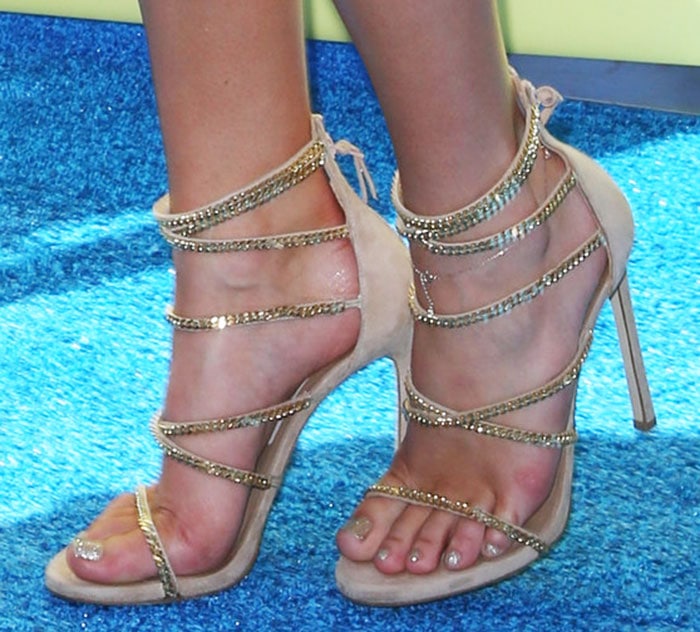 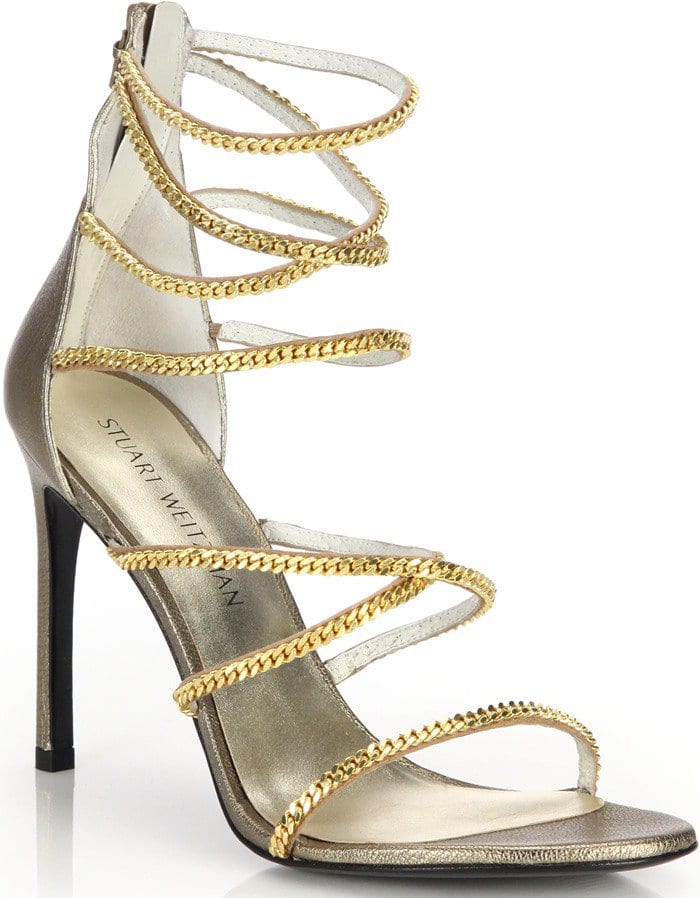 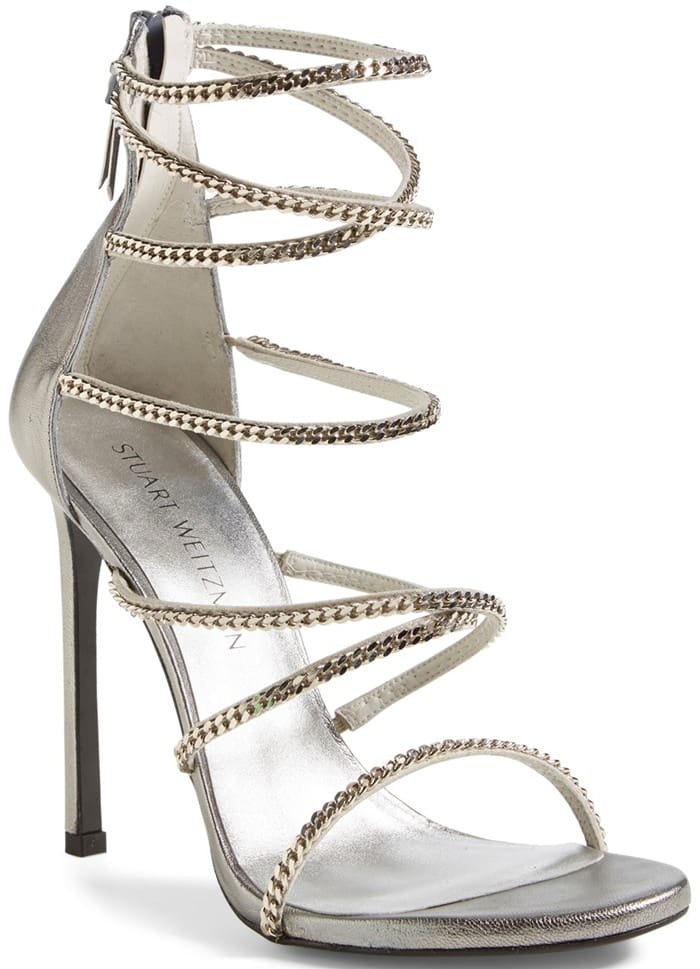 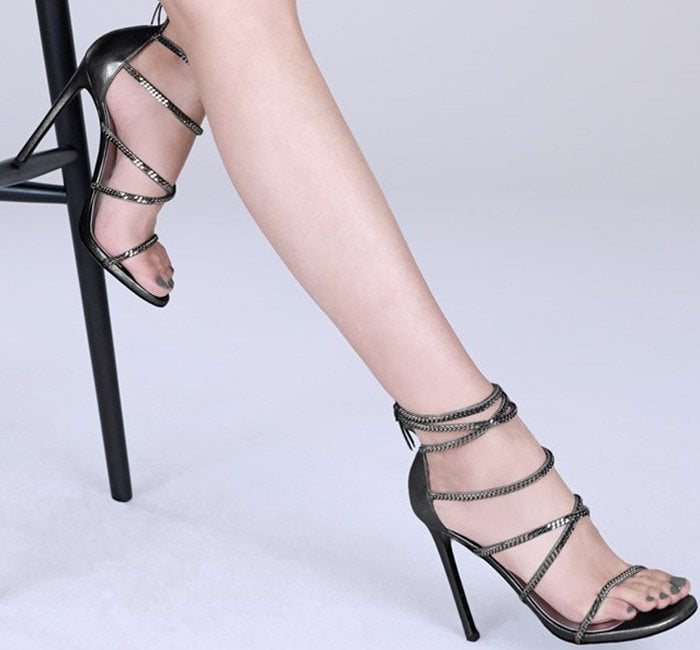 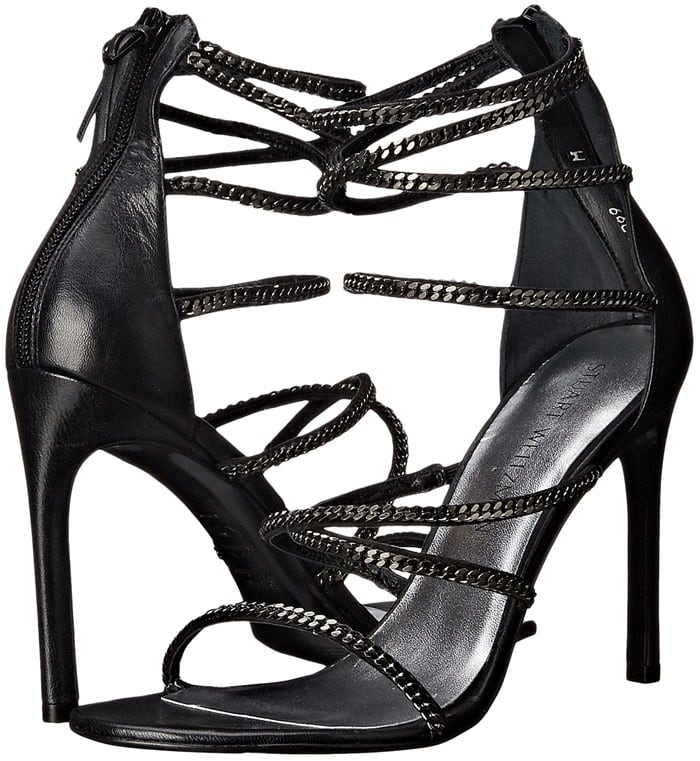 The “Shake It Up” star later changed into a Versace Resort 2016 mini frock as she picked up her surfboard award for Choice Movie Villain for her role in The Duff. 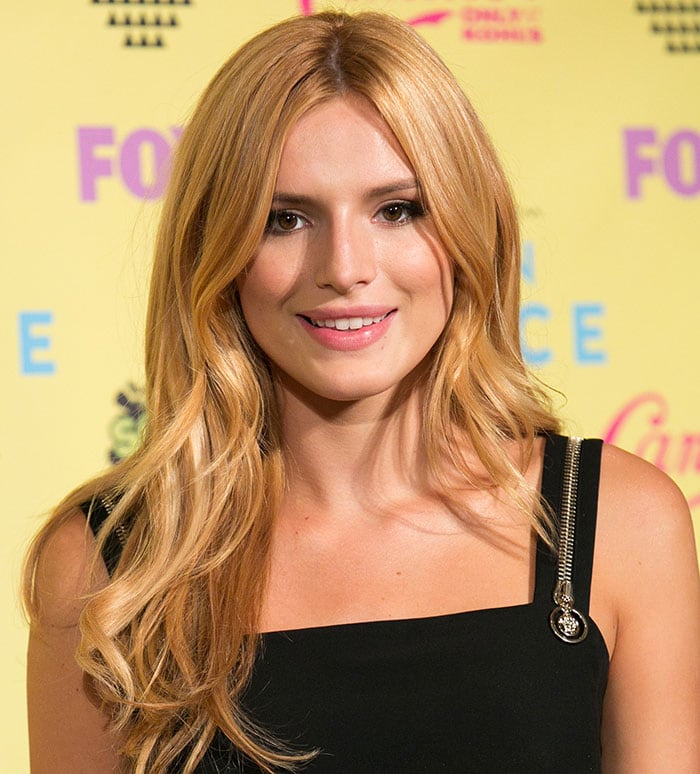 Bella Thorne changes ensembles to receive the Choice Movie Villain award for her role in “The Duff” at the 2015 Teen Choice Awards (Credit: Brian To / WENN)

She swapped the daring Balmain dress for a sweet and edgy black outfit that featured a neon hem and zipped straps with logo pulls. 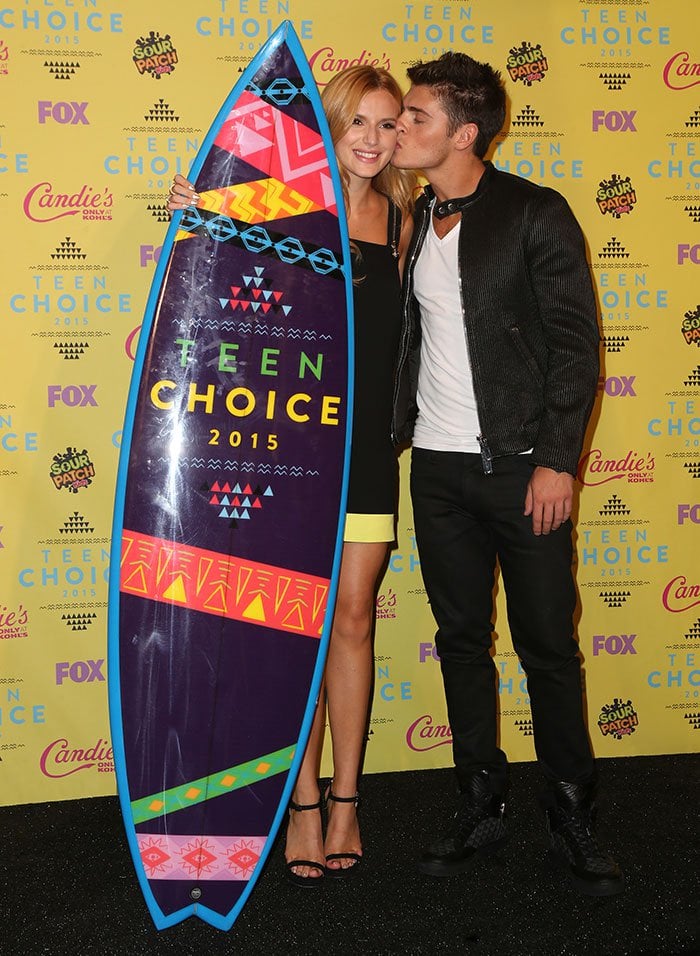 This time she sported a pair of ankle-strap “Atalya” sandals from Alexander Wang, available at Shopbop. 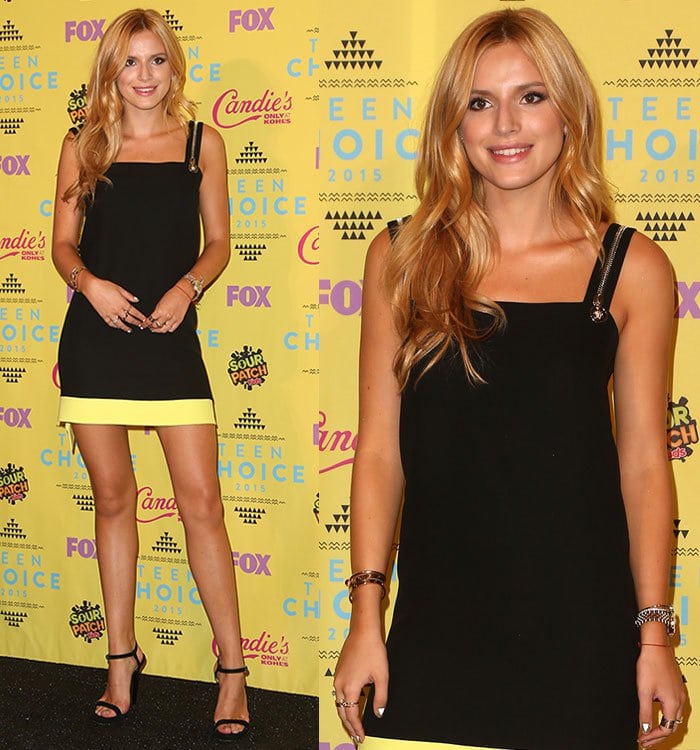 Gregg couldn’t be any prouder of his girlfriend’s achievement as he was seen giving her a kiss on the cheek inside the press room. 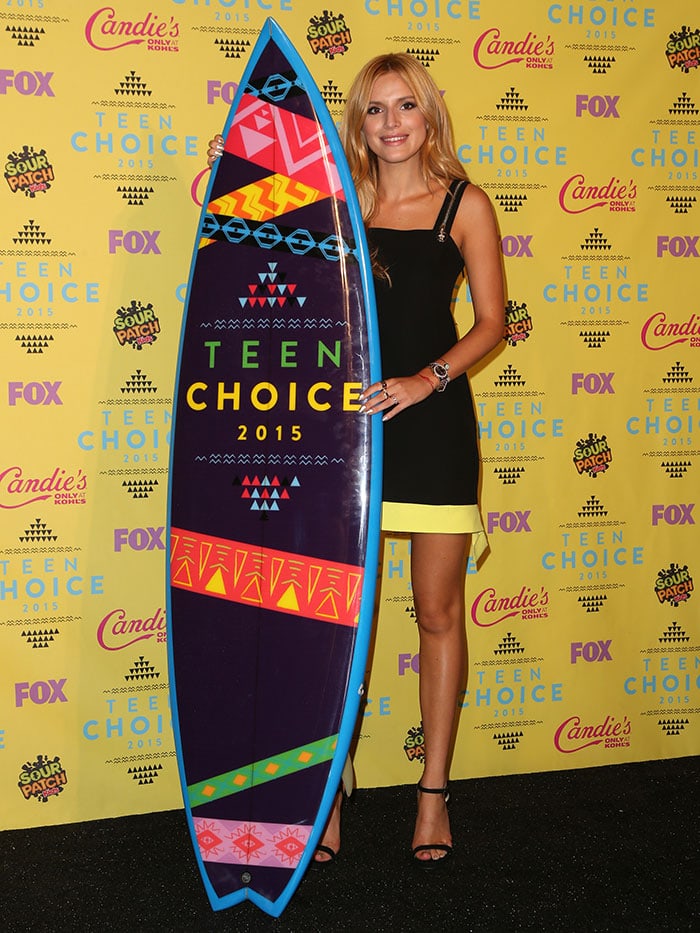 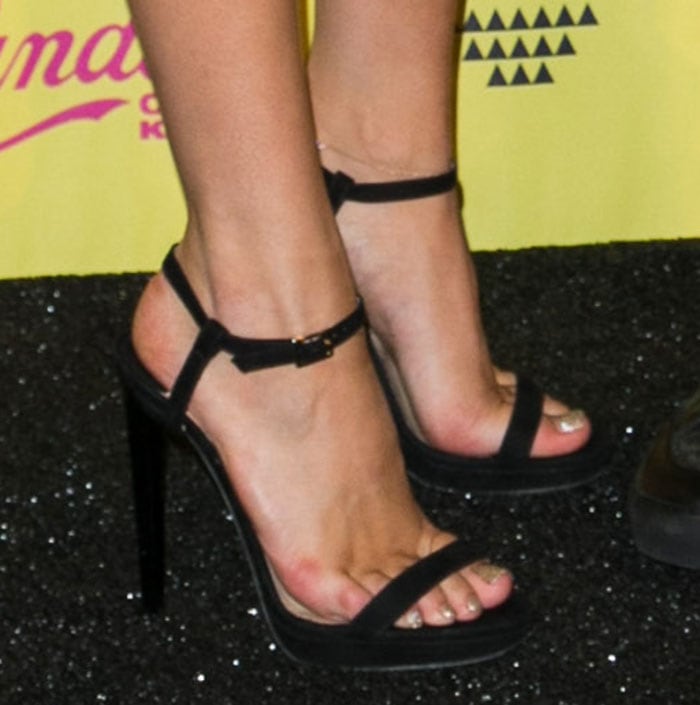 However, the night wasn’t without controversy. Bella was accused of throwing shade at Swedish YouTube star PewDiePie, who wasn’t in attendance for the award show.

Instead of saying his actual name — Felix Kjellberg — while announcing him as a nominee for the Choice Web Star category, Bella said, “Felix something, something, something — you know what? Be here if you want to hear the rest of your name.”

She immediately took to Twitter to clarify that it was just a joke and that she didn’t write it.