Home » Shoes » How Old Was Reese Witherspoon as Dani in The Man in the Moon?
Shoes

How Old Was Reese Witherspoon as Dani in The Man in the Moon?


It was February 2016 and spring hadn’t officially kicked in yet, but “The Man in the Moon” actress Reese Witherspoon didn’t seem to notice when she stepped out to run some errands in Santa Monica. 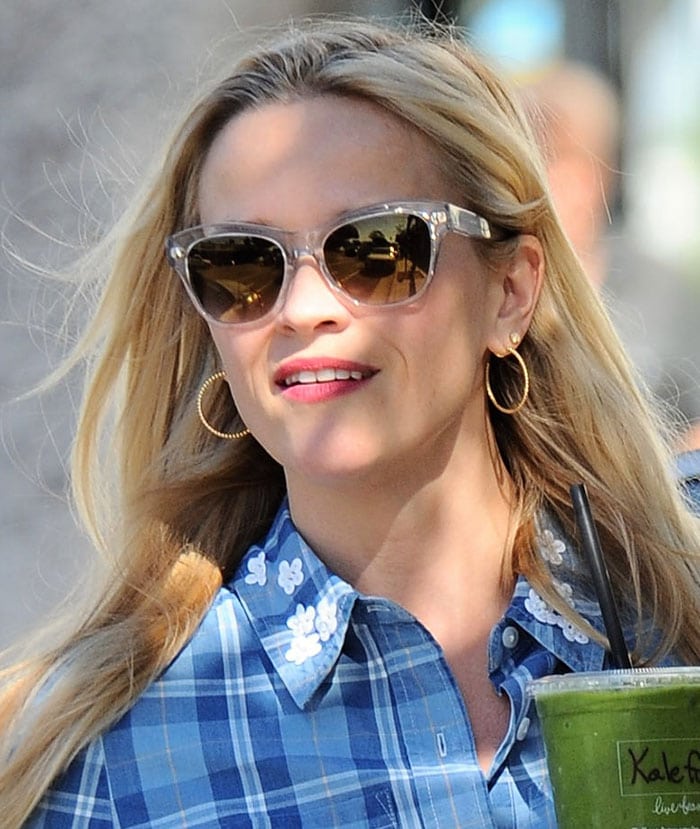 Reese Witherspoon wears her blonde hair down on February 26, 2016, as she runs errands in Santa Monica, California (Credit: WENN)

25 years earlier, she made her film debut in the 1991 American coming of age drama film The Man in the Moon, which was the final film directed by Robert Mulligan. 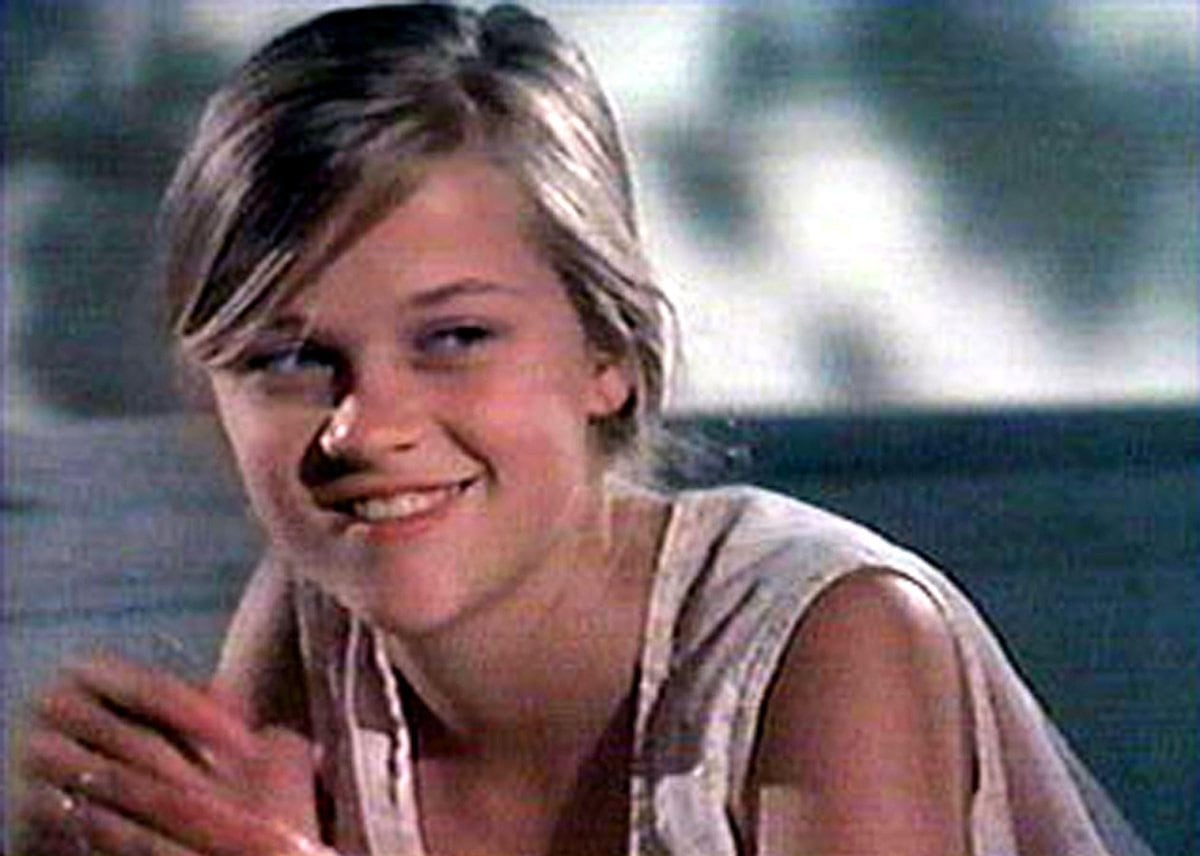 Reese Witherspoon made her screen debut as Danielle ”Dani” Trant in The Man in the Moon (Credit: Metro-Goldwyn-Mayer)

Just 14 years old when she auditioned for a part as an extra in the coming of age drama film, her audition impressed director Robert Mulligan and she was offered the central role of tomboy Dani Trant.

Director Robert Mulligan admitted it was a risky decision to cast the Louisiana-born, Tennessee-raised actress in The Man on the Moon.

“We had a casting team that went out and saw several thousand kids and tested them on video. When I saw Reese’s test, she just jumped off the screen, simply as a personality. I couldn’t tell whether she could act or not, but she’s got a wonderful face and there’s a brightness and intelligence there. Then, when I tested her in Santa Monica, a strange breakthrough took place. Early in the movie, Dani is a bit of a tomboy. Reese was trying to project this in a scene where she had to get angry with the boy, but it had a false ring to it,” he said in an interview. 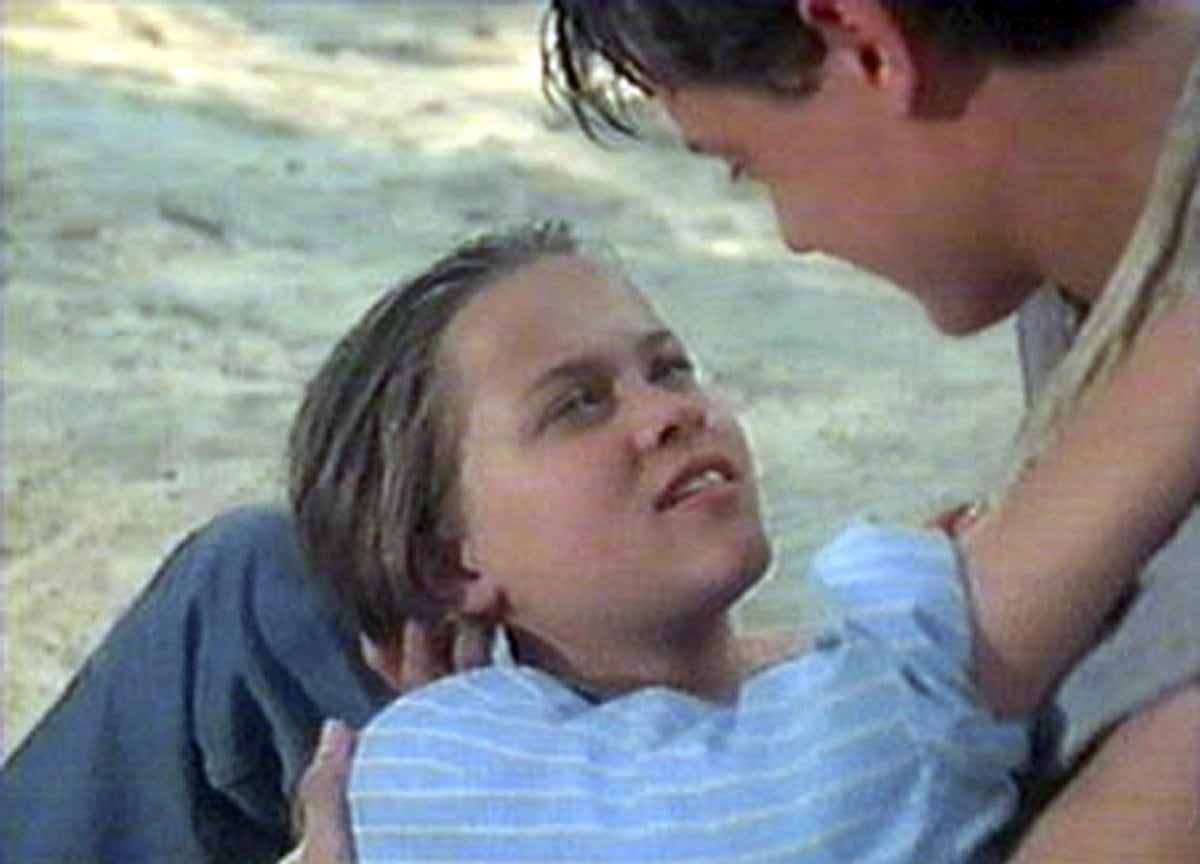 Reese Witherspoon was just 14 years old when making her film debut in The Man in the Moon (Credit: Metro-Goldwyn-Mayer)

“Because in real life she isn’t a tomboy. She’s a real ‘girl’ girl. Just before we did another rehearsal, I told her I wanted her to chew gum. Well, she started chewing gum, and all of a sudden the performance happened. She was tough. Strong. Direct. And the scene worked. Like that. In an instant, it was there. What was marvelous was, at the end of the scene, Reese knew that something happened. Her compass, her sense of what’s real, kicked in. The motor was running and she knew it. It was funny because she said: ‘Can I always chew gum?’ And I said: ‘Yeah.’”

“It’s literally my favorite movie,” Lena Dunham said about Reese’s debut film when appearing on The Tonight Show Starring Jimmy Fallon in 2014. “That’s one of my favorite all-time movies ever,” Fallon responded. “I’ve seen it literally about 100 times.”

Winning a Young Artist Award in the category of Best Young Actress for her performance as Danielle ”Dani” Trant, Reese had turned 15 by the time the film was released on October 4, 1991. 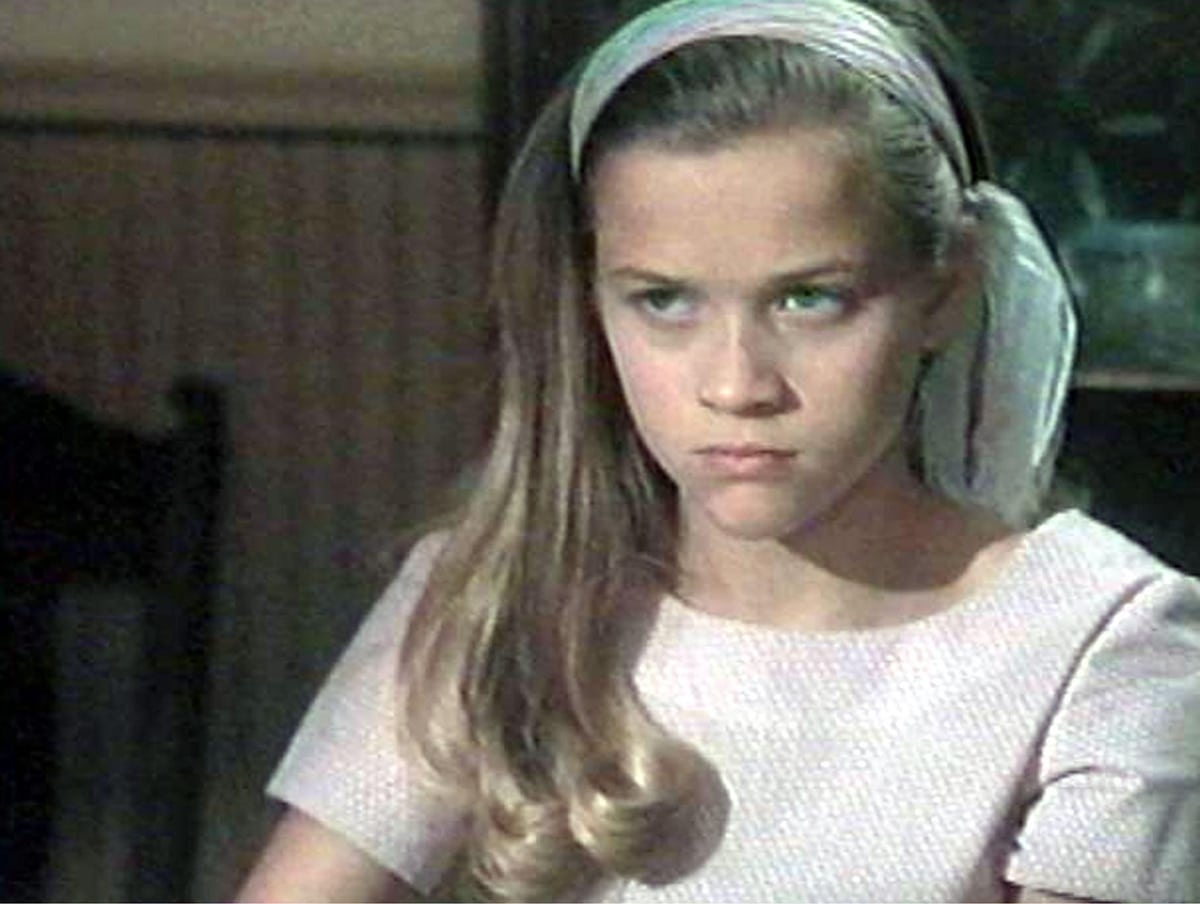 Born on March 22, 1976, in New Orleans, she was 14 when shooting The Man in the Moon in Louisiana. A body double was used for her skinny dipping scene.

Not a true story, The Man In The Moon is based on a screenplay by novelist Jenny Wingfield, who spent much of her childhood in Louisiana. 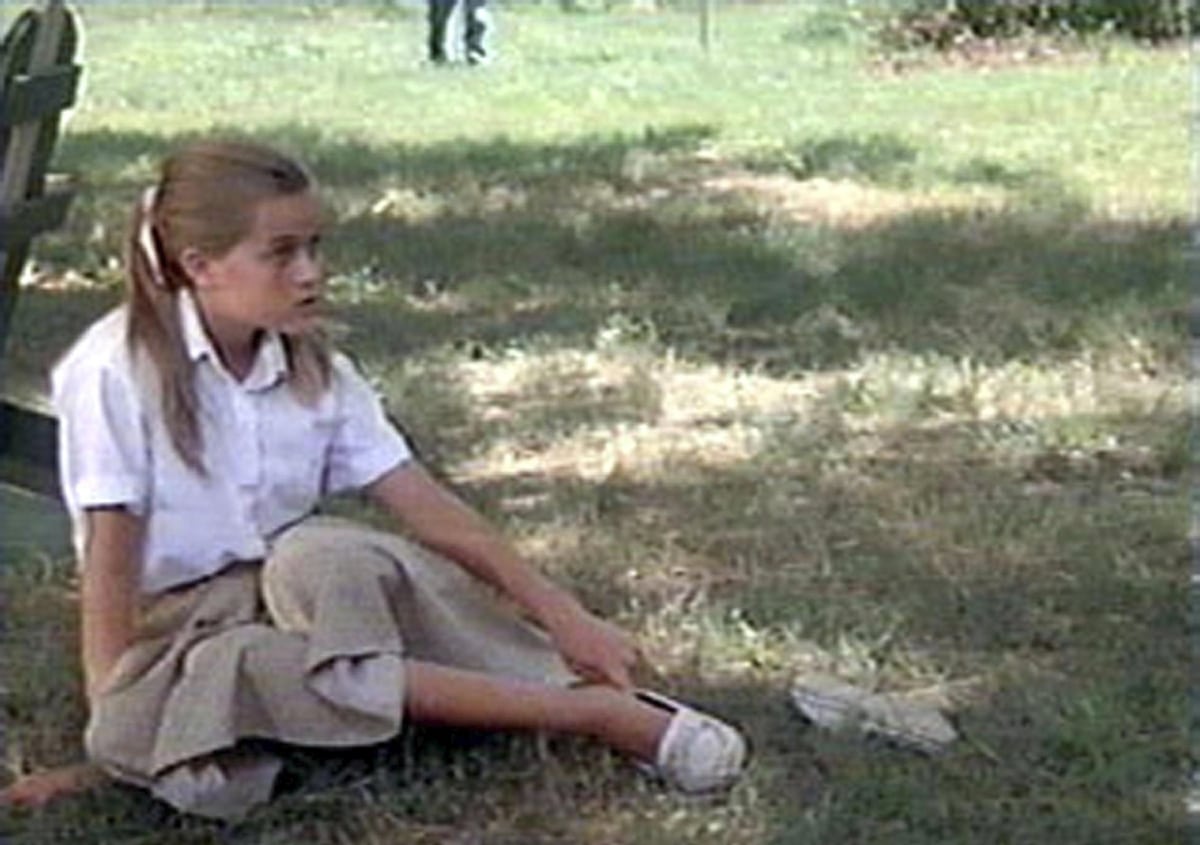 When shooting The Man in the Moon, Reese Witherspoon was 14 years old, the same age as her character in the film (Credit: Metro-Goldwyn-Mayer)

“When I was little, I really wanted to be an actor, which was kind of weird because my mom and dad were both in the medical industry,” Reese recalled in an Instagram video shared in January 2020.

“So when I was 7 years old, I got to be in a local flower commercial. My best friend down the street, her grandma had a flower shop, so I got in this little flower commercial, and I loved it so, I said to my mom ‘I really want to take acting classes.’ And she signed me up. I would do acting classes every Saturday for three or four hours.” 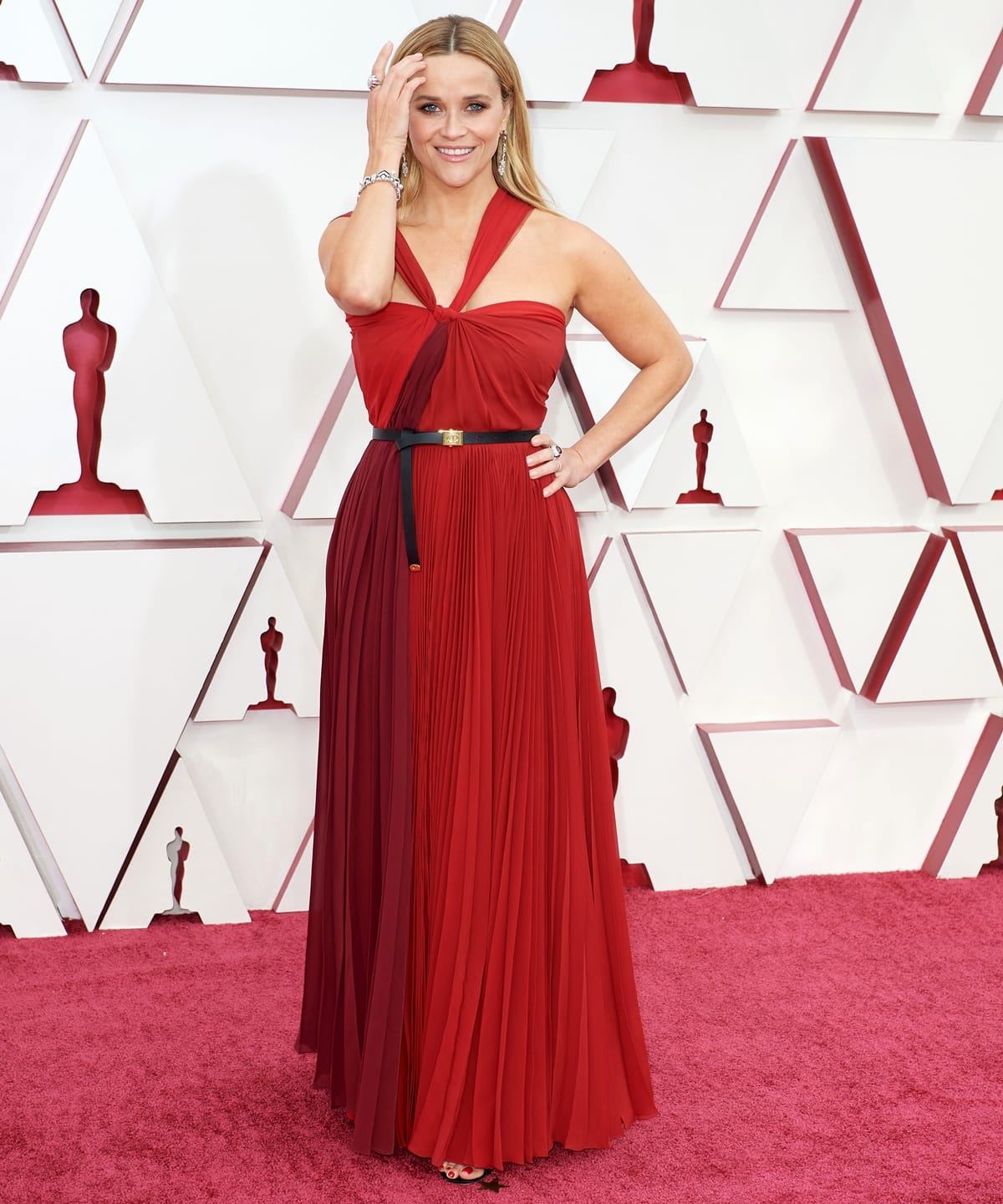 Reese Witherspoon in a red Dior dress and Bvlgari jewelry at the 2021 Academy Awards on April 25, 2021, at Union Station in Los Angeles (Credit: Avalon / WENN)

“I came home from softball practice and my mom said, ‘Reese, I need to talk to you, they’re calling and asking if you’ll go to Los Angeles for a screen test.’ I’ll never forget my mom said to the people on the phone, ‘What kind of movie is this anyway?’ I think she wanted to make sure I wasn’t in like a dirty movie or something. Good job, mom,” she laughed.

“I remember I was feeling really nervous and the director was this really amazing man, Robert Mulligan, he said, ‘Why don’t you chew gum? You just sound different and you act differently when you’re chewing gum,’” she added.

“He’d make me spit it out right before I did the scene, but I had to remember how I did it when I was chewing the gum because he wanted me to kind of throw all my words away or something like that.” 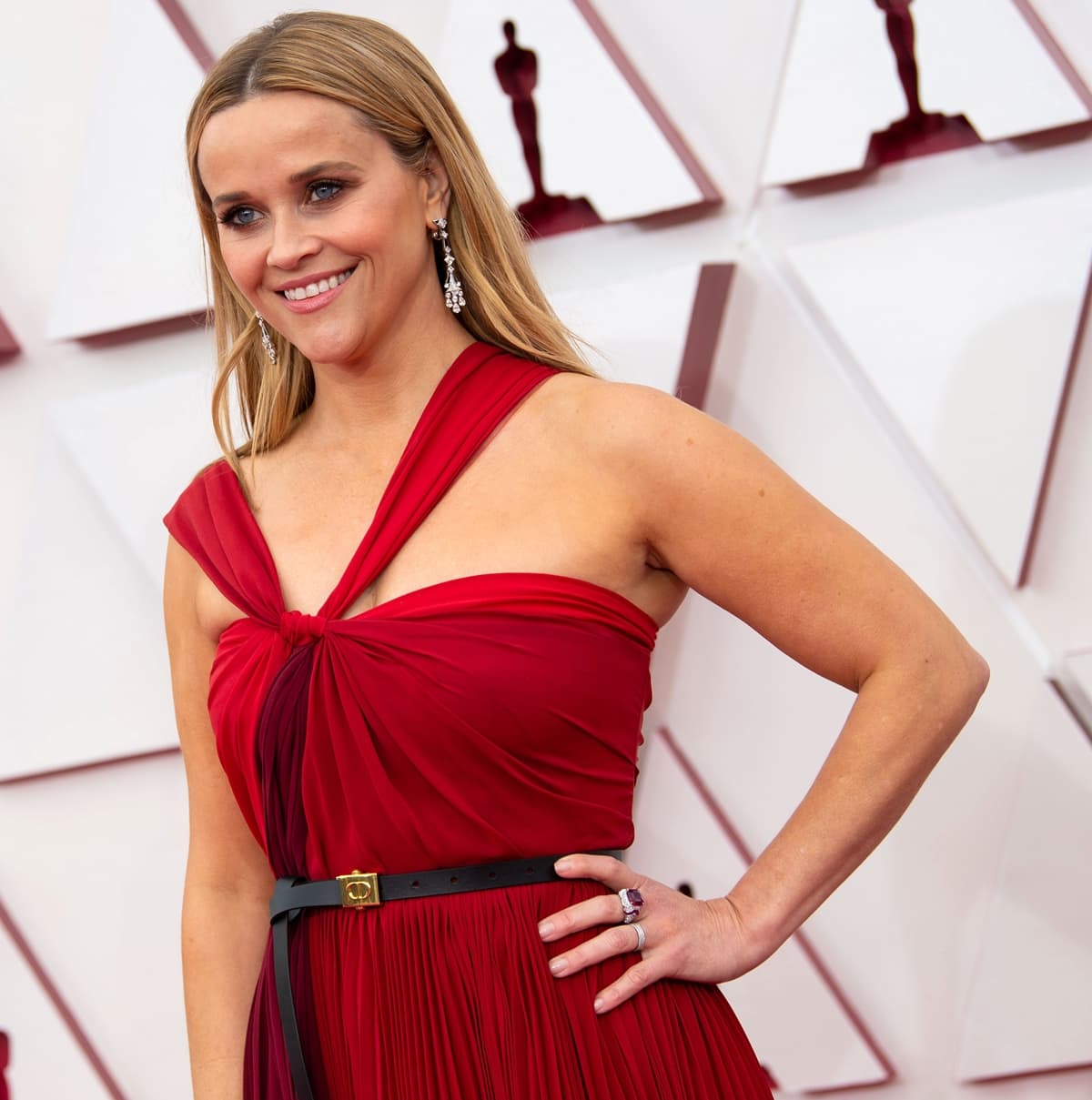 “I learned everything I needed to know about being a film actor, how to hit marks, how to perform for a camera, how to get emotional,” she said about filming The Man in the Moon.

“I had to kiss a boy onscreen for the first time, and I was 14 years old and I was so embarrassed,” she said about her first kiss.

“And I had to do a scene where I was supposed to be skinny dipping, and they had a nude double for me and that was so mortifying when I was 14. Even though I wasn’t doing it.”

In February 2016, then 39-year-old actress wore a blue plaid button-down shirt tucked into a pair of white crop flare jeans, both from her own clothing line, Draper James. She seemed to be embracing the warmer weather in Southern California. 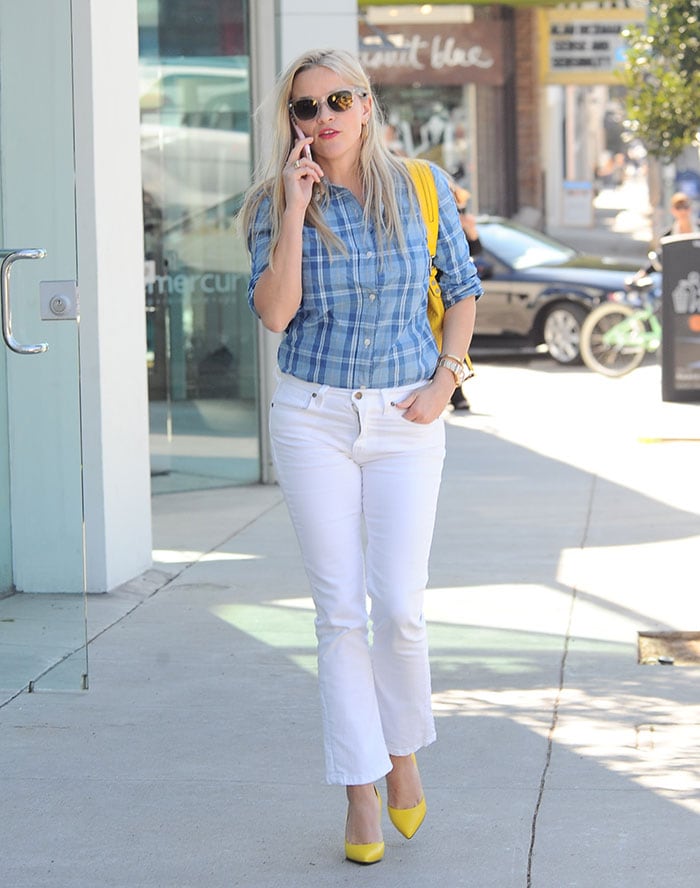 The Legally Blonde actress teamed her springtime ensemble with yellow accessories, including a pair of Saint Laurent pumps and a croc-embossed Elizabeth and James bag. 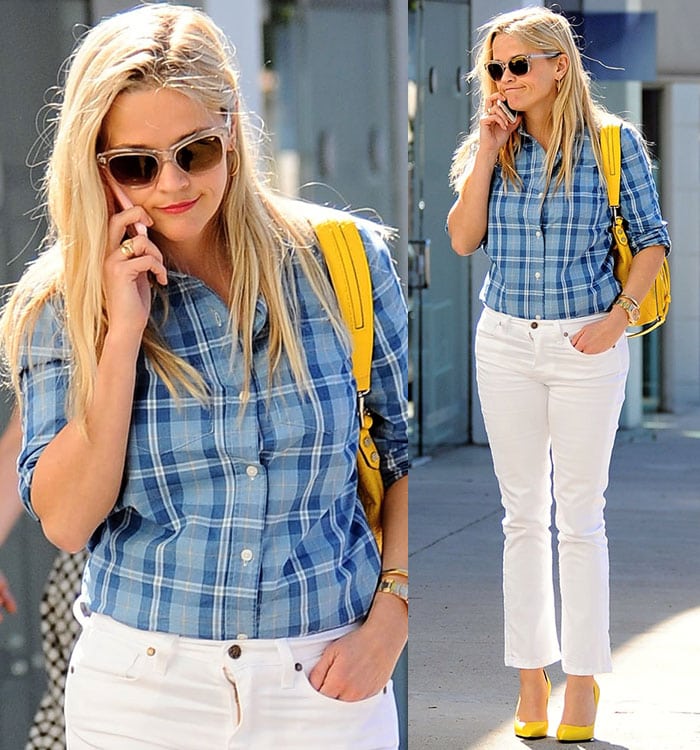 She further glammed up her look with a few pieces of gold jewelry, including a pair of hoop earrings, a couple of rings, a bracelet, and a watch. 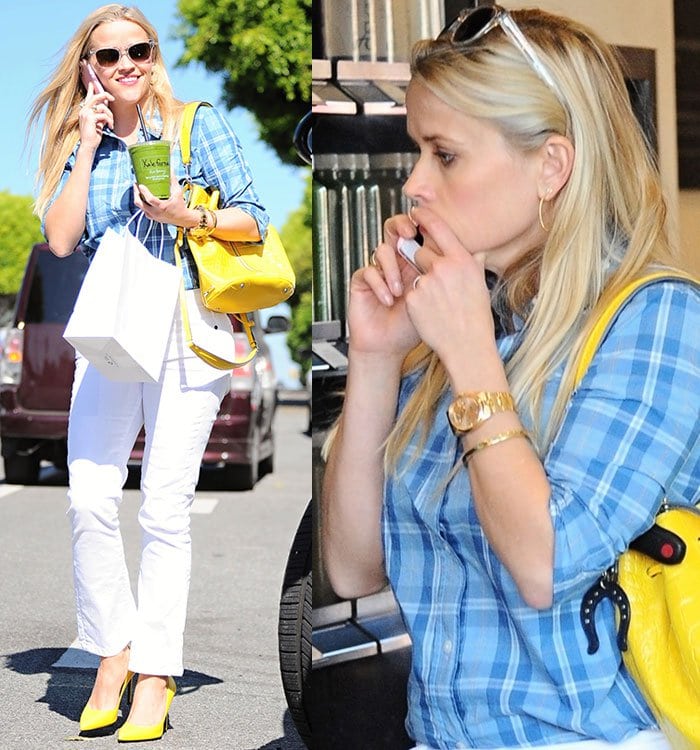 Reese Witherspoon wears a Draper James look as she carries a green smoothie and talks on her phone (Credit: WENN)

Reese left her blonde locks loose over her shoulders and wore a natural makeup look with a slick of lip color while hiding her eyes behind a pair of Westward Leaning sunglasses. 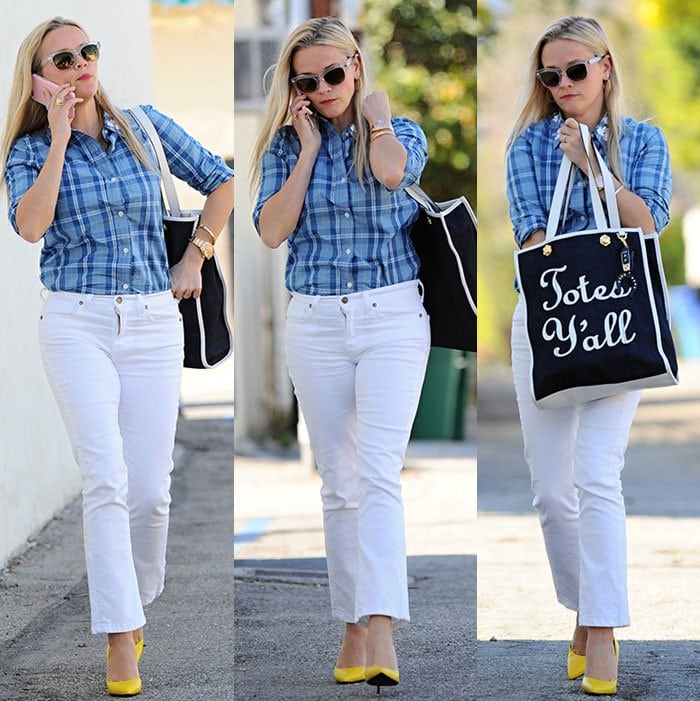 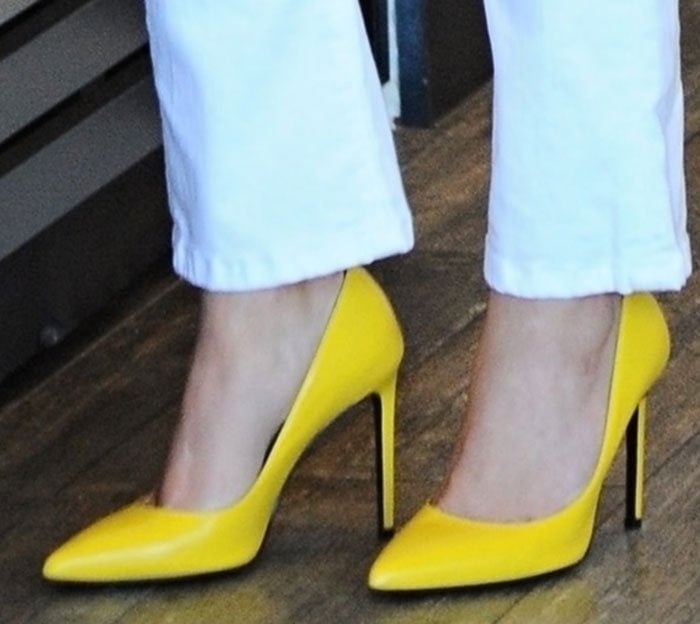 These pumps have a classic silhouette with pointed toes and about 4.3-inch stiletto heels. 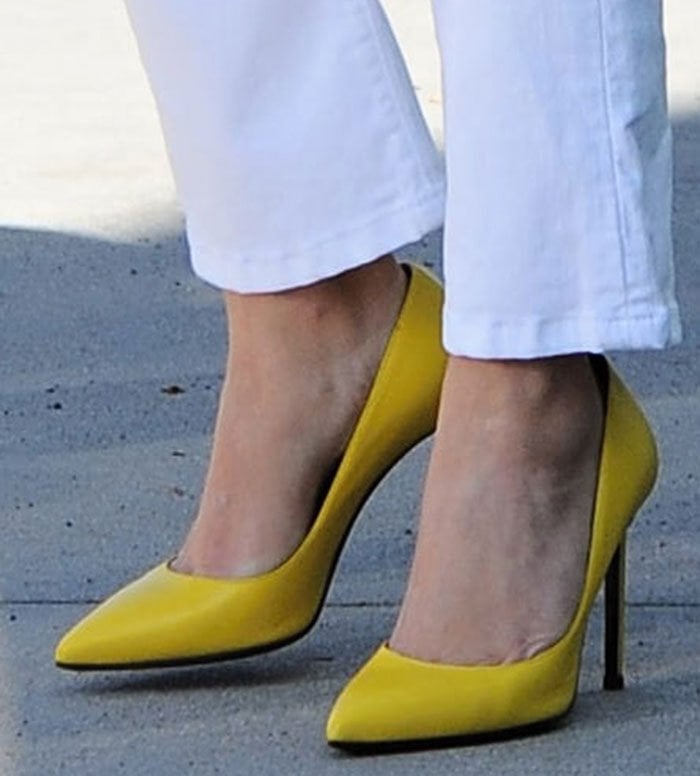 You can get these Saint Laurent pumps in yellow and rose versions at Nordstrom and Farfetch.