She dated Quavo for three years before calling it quits in March.

Following their breakup, Saweetie was rumored to be dating NBA superstar James Harden after Quavo’s fellow Migos member, Offset, liked a random tweet suggesting that the two are in a relationship.

While it hasn’t been confirmed yet, another rumor surfaced about James allegedly sending Saweetie a $100,000 Cash App gift to date him. 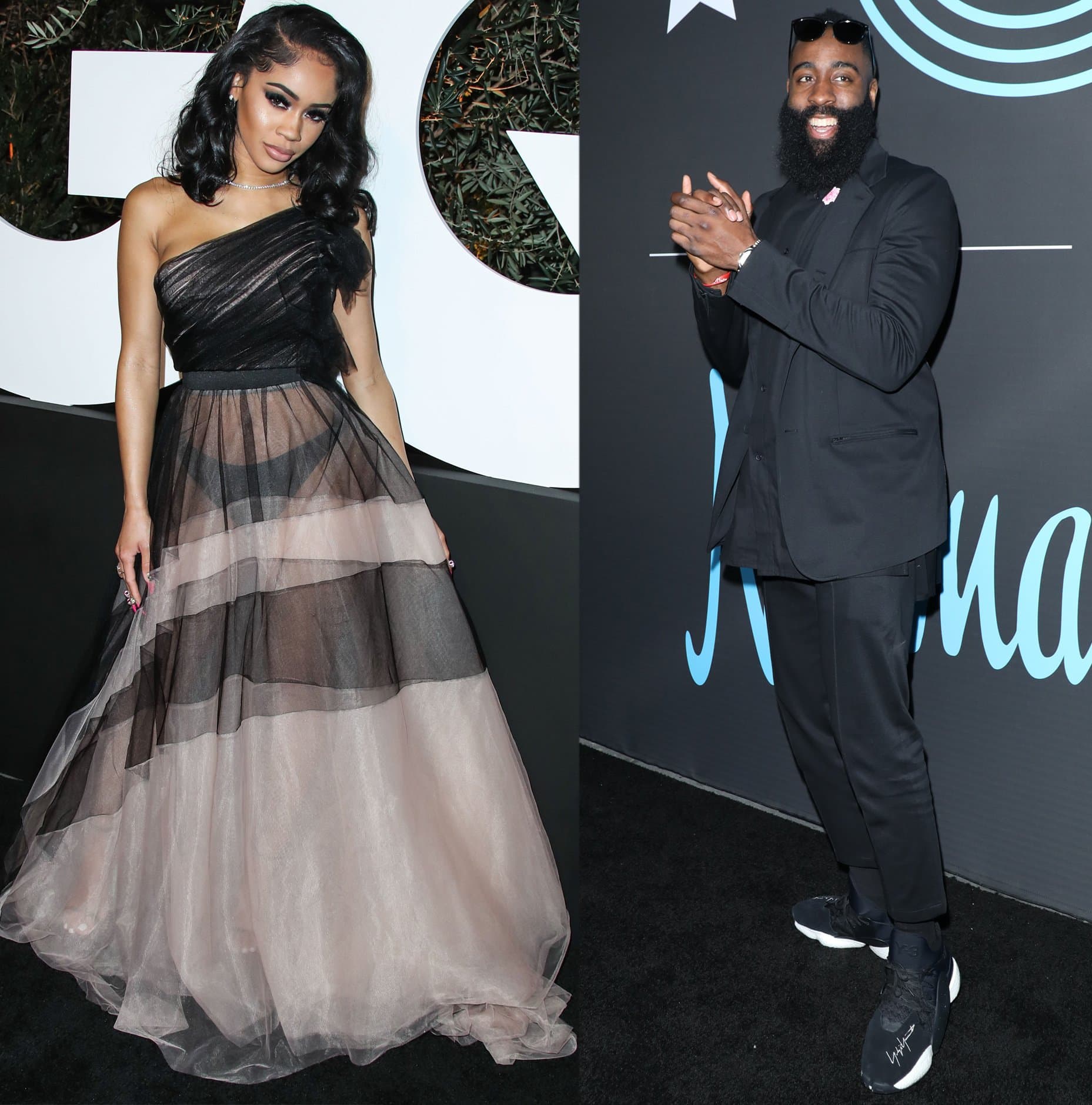 Rapper 50 Cent chimed in on the rumor, sharing a screenshot of the news headline in a now-deleted Instagram post, captioned: “Wait he a superstar, why the f*** is he paying a b**** to go on a date. See what you did @quavohuncho they don’t know what they like till they see somebody with it SMH LOL Help me understand!”

As the gossip spread like wildfire, the Nets guard, who’s currently recovering from a hamstring injury, quickly took to Instagram to address the issue. 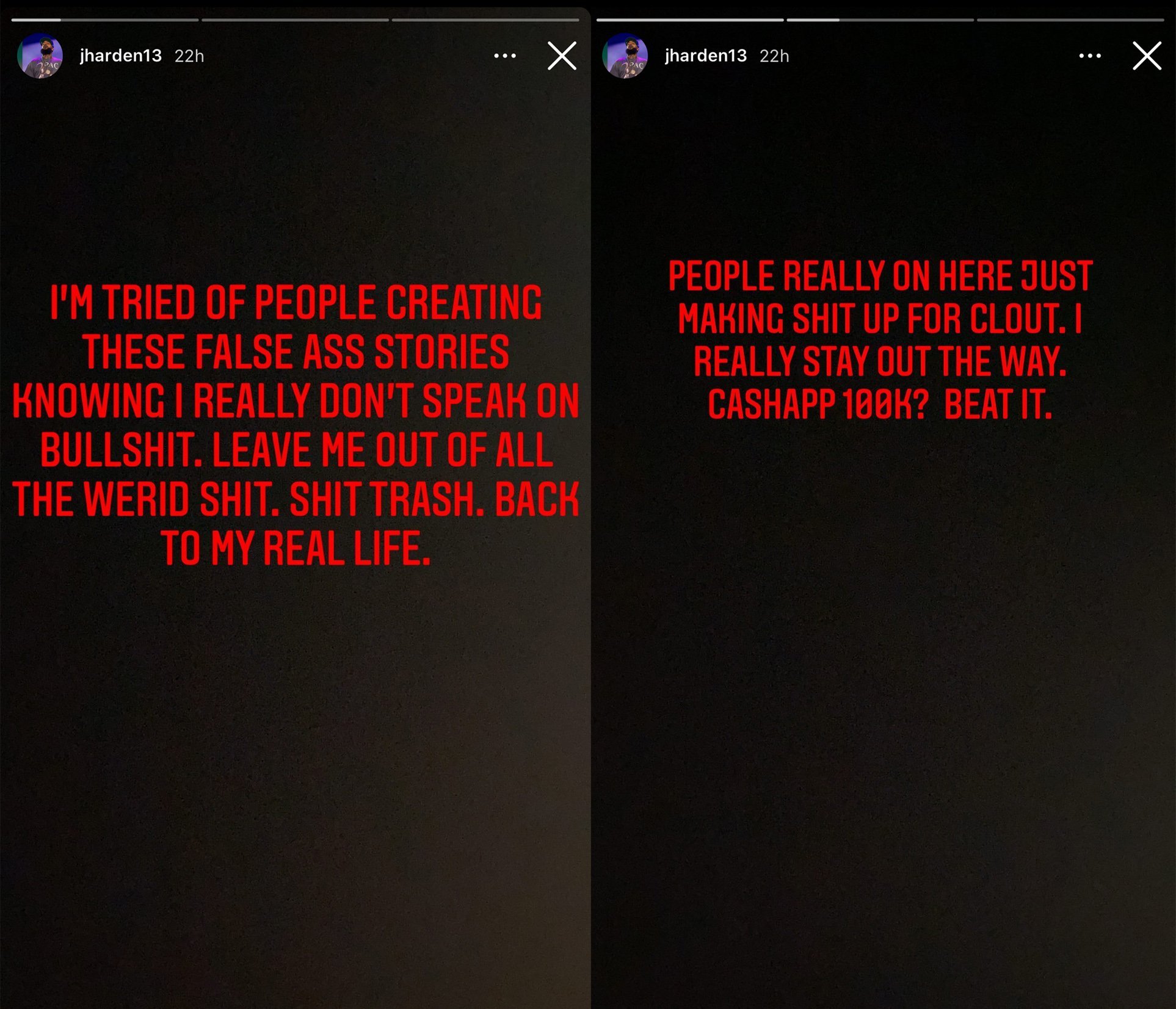 James Harden shuts down rumors that he gifted Saweetie $100,000 via Cash App to go out with him (Credit: James Harden Instagram)

While he didn’t say anything about dating Saweetie, he did shut down the Cash App rumors, calling it a false story and saying he’s tired of the people who are making things up just for clout.

Last week, Saweetie was spotted looking amazing while heading to the Los Angeles rooftop bar and lounge, The Highlight Room. 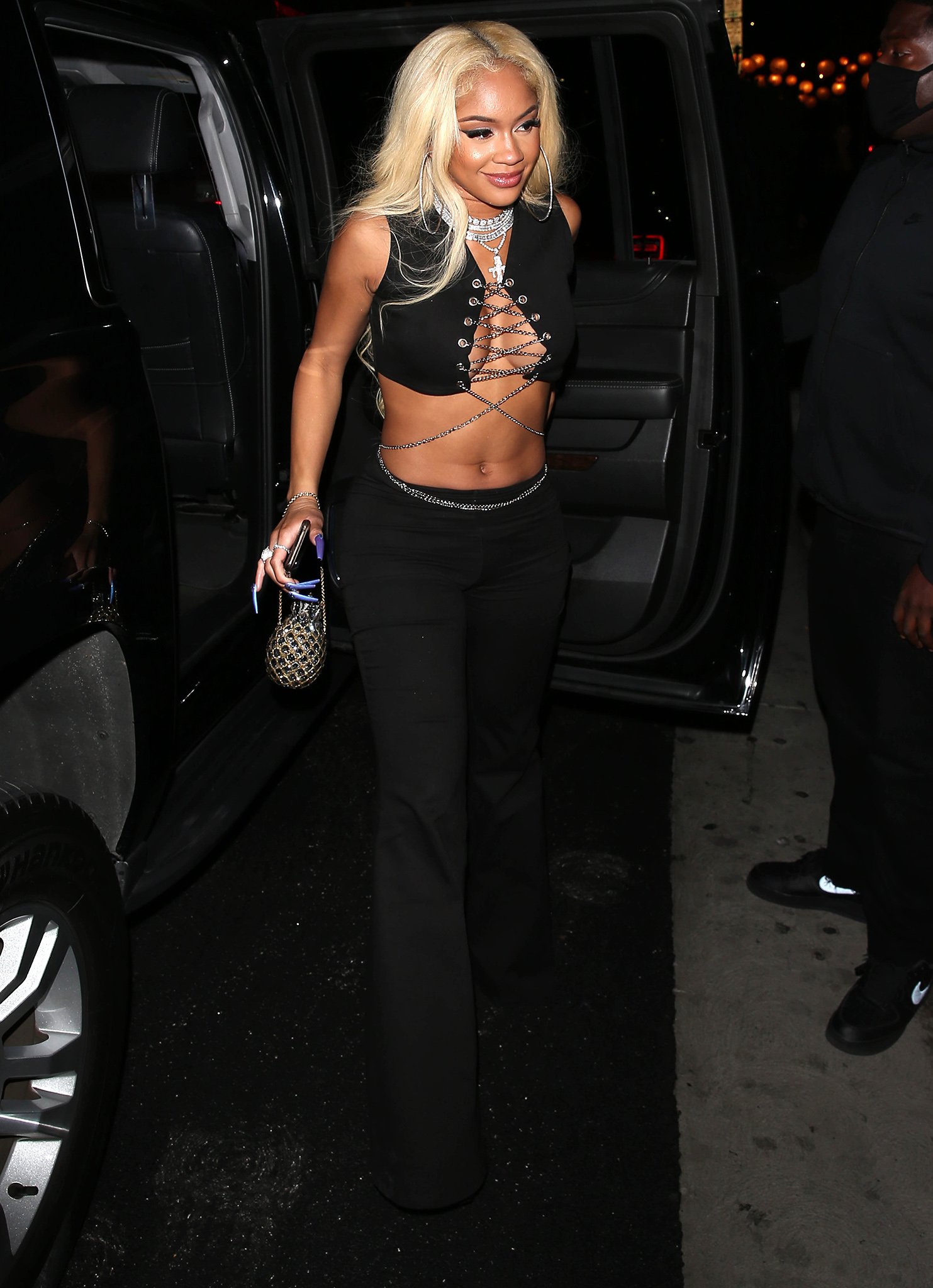 Saweetie turns heads as she arrives at The Highlight Room in Hollywood on June 3, 2021 (Credit: Mega / WENN)

Working a late 1990’s look, the 26-year-old rapper put on an eye-popping display in a racy black outfit.

She flaunted her abs and ample cleavage in an open black top held together by laced-up silver chains that were crisscrossed around her tiny waist like a body chain. 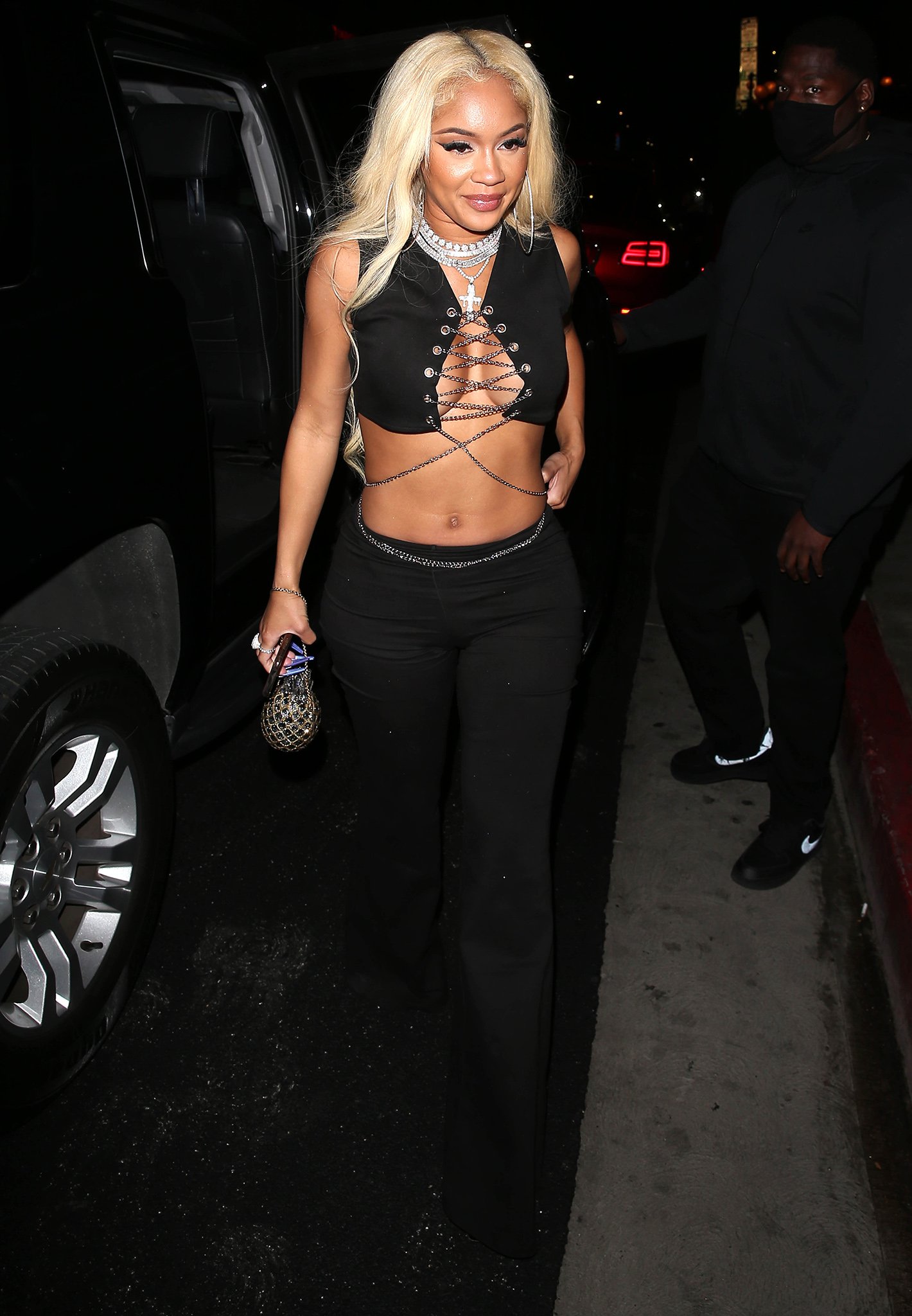 Drawing further attention to her bosom, Saweetie styled her look with layers of chunky diamond necklaces around her neck.

She also wore oversized hoop earrings, a bracelet, and a diamond ring, and carried her nighttime essentials in a sparkly pineapple-shaped purse.

For her beauty look, the Best Friend singer styled her long blonde hair in loose waves and wore winged eyeliner with false lashes and a swipe of glittery lip gloss. 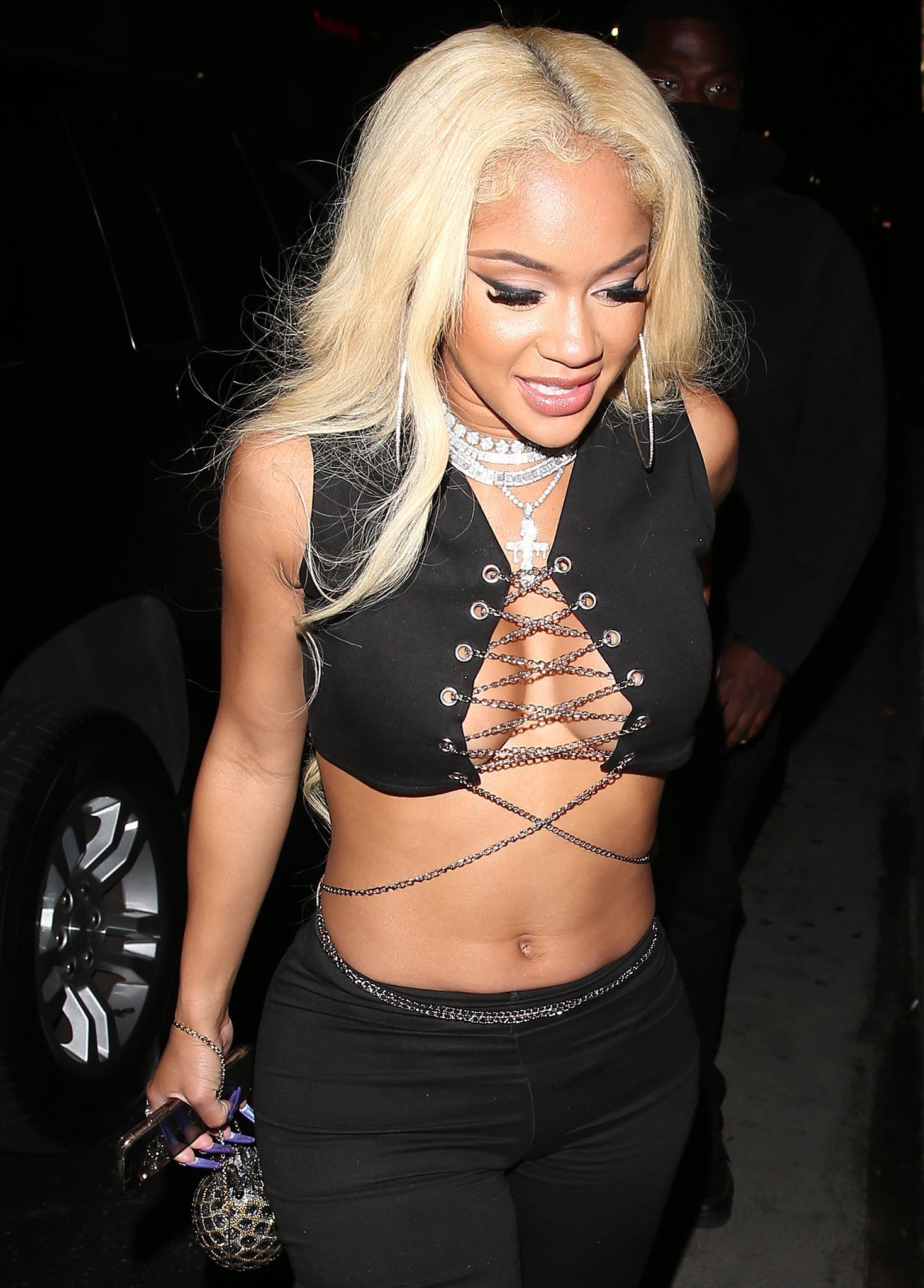 Saweetie wears her long blonde hair down in waves and highlights her eyes with winged eyeliner and false eyelashes (Credit: Mega / WENN)

Why Did Saweetie and Quavo Break up?

The two began dating in 2018 when Quavo slid into her DMs with a snowflake emoji in reference to her debut single Icy Grl. She then replied with a stir-fry emoji as a nod to his hip-hop group Migo’s hit song. 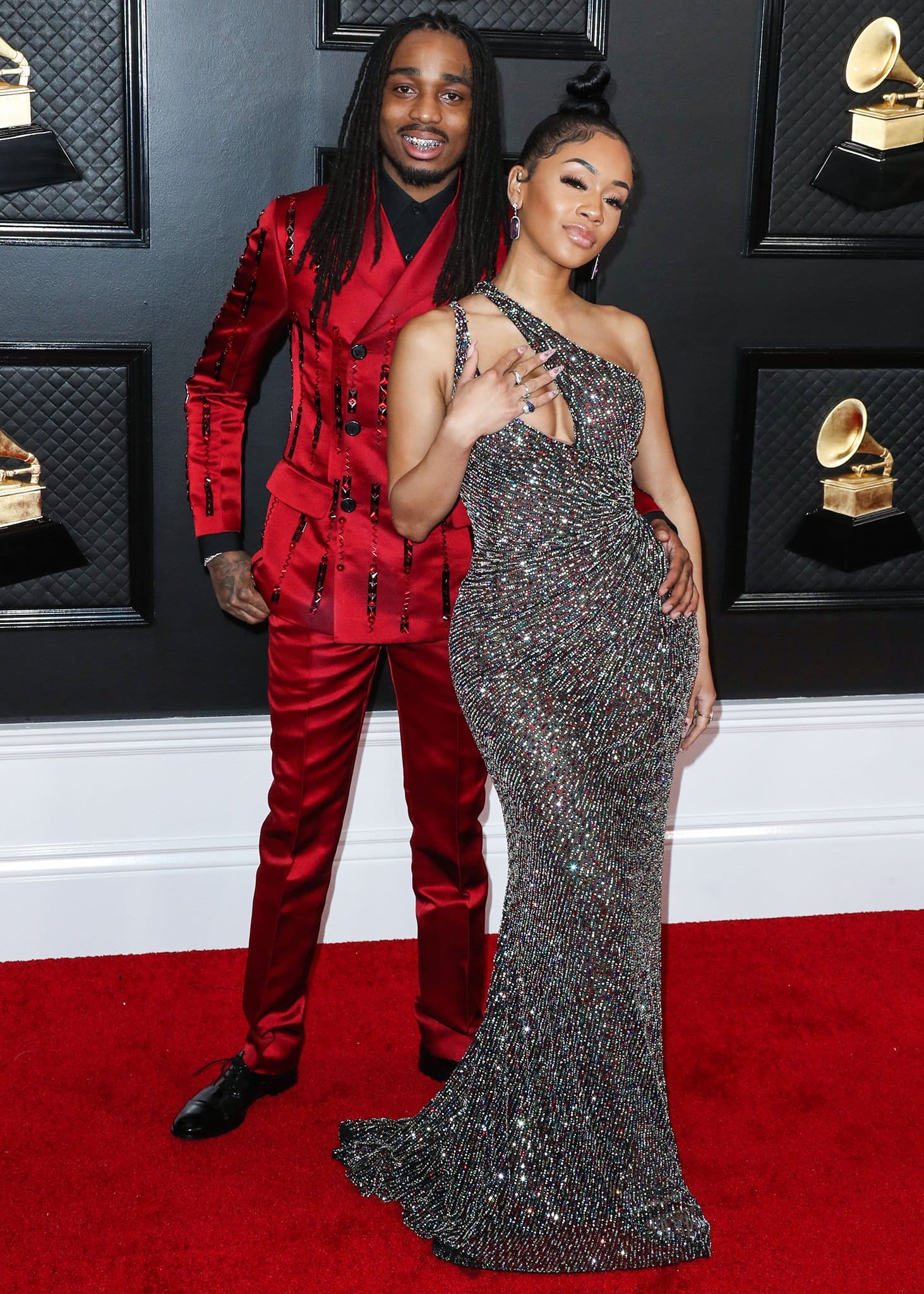 After unfollowing each other on Instagram, Saweetie took to Twitter to confirm their breakup. She said, “love isn’t real when the intimacy is given to other women,” which had fans speculating that he had cheated on her.

Following her tweets, Quavo broke his silence and denied the allegation. 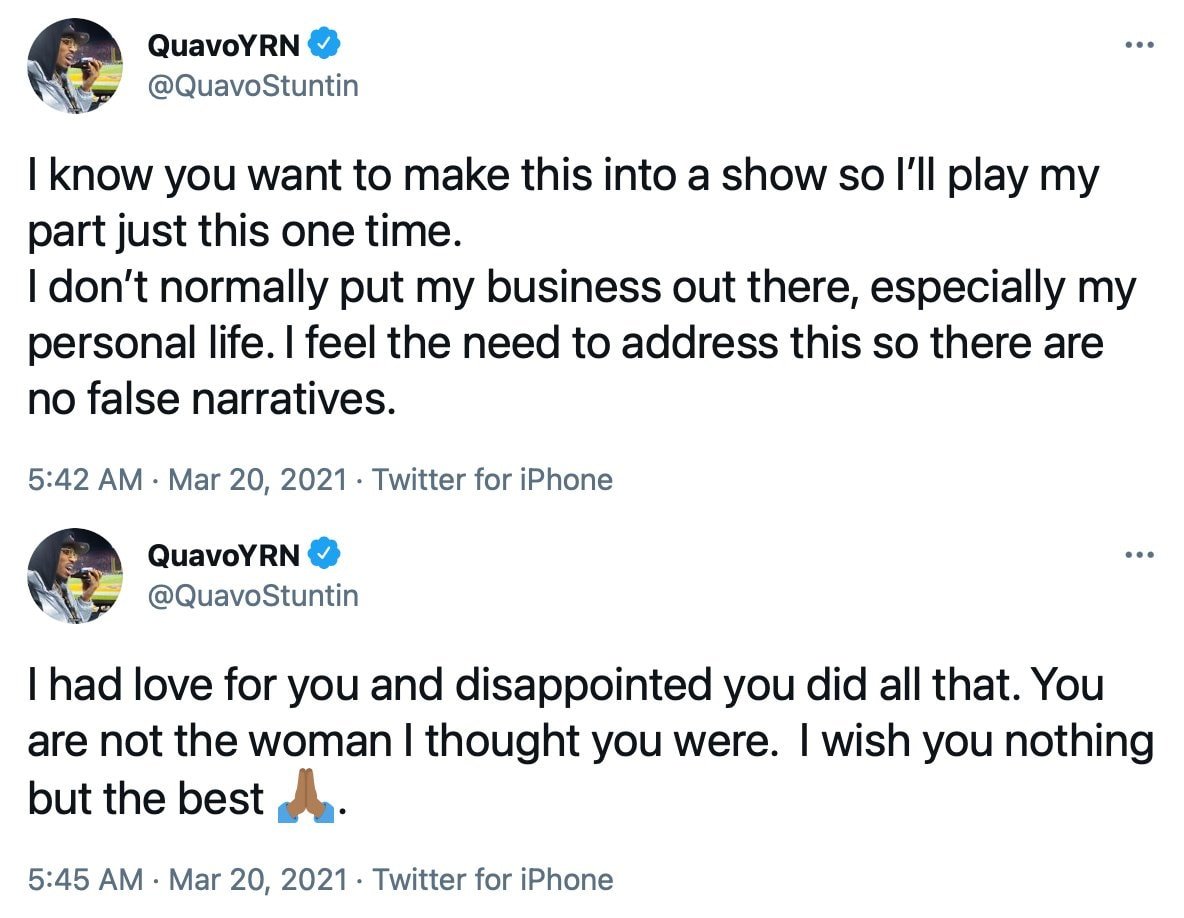 A few weeks after their breakup, surveillance footage of Quavo and Saweetie fighting in an elevator in 2020 surfaced online.

As per TMZ, the altercation took place at an apartment complex in North Hollywood. The video sees Quavo dragging Saweetie to the elevator floor as they appear to be grappling over an orange case.

The two did not comment on the leaked video, but it appears the reason for their breakup is more than just Quavo’s alleged infidelity.

She got her nickname “Saweetie” from her grandmother, who used to call her “sweetie.”

She started writing music at 13 and received a Bachelor of Arts in Business at the University of Southern California in 2016. 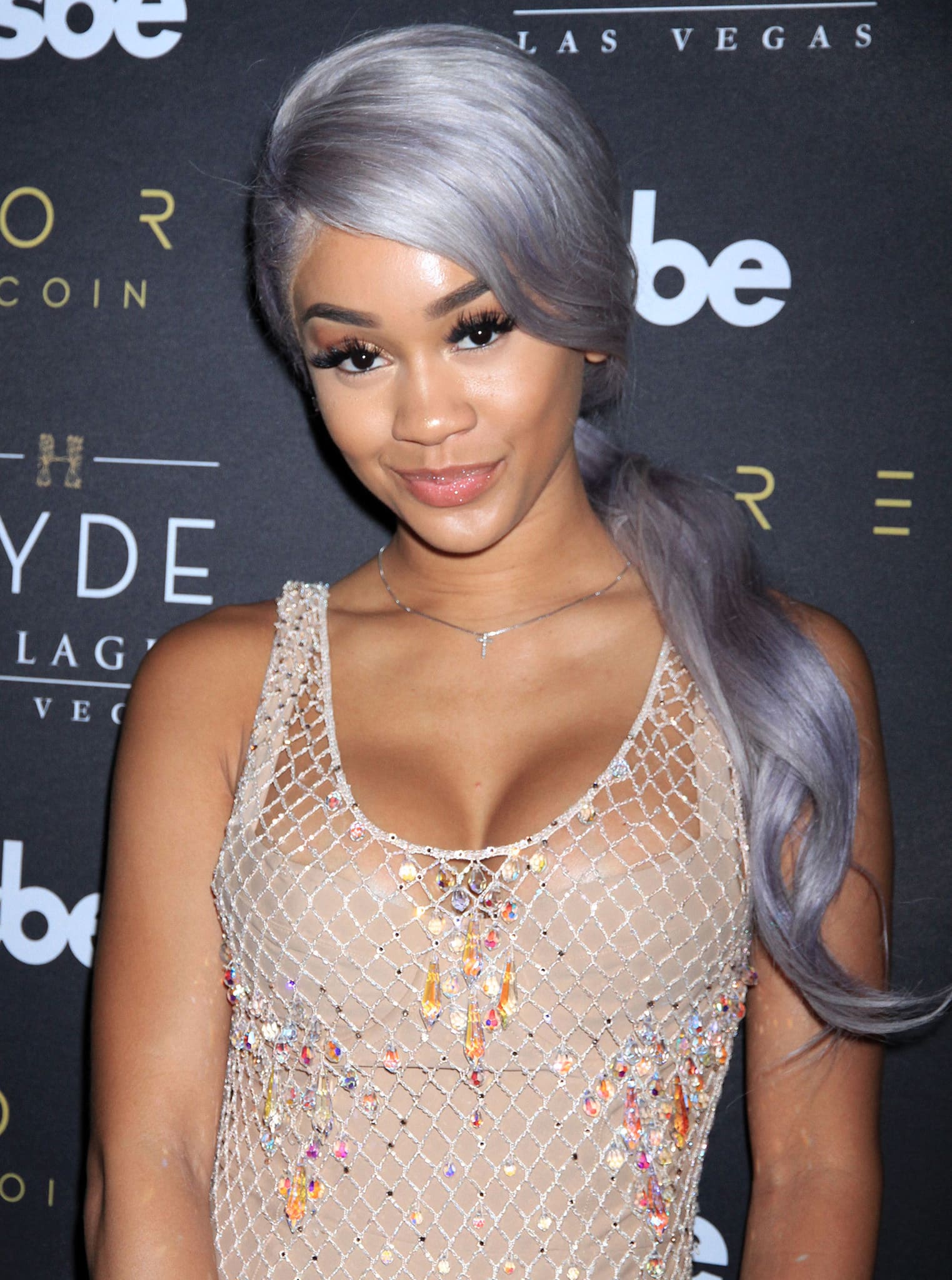 Before breaking into the music scene, Saweetie told Sniffers she was only “renting rooms off of craigslist, doing brand ambassador jobs, and selling clothes online, just trying to get by in LA living in the Bay Area.”

In 2016, she started posting short raps on her Instagram, and one of the videos featured her rapping over the beat from Khia’s My Neck, My Back (Lick It), which then turned into her debut single Icy Grl. 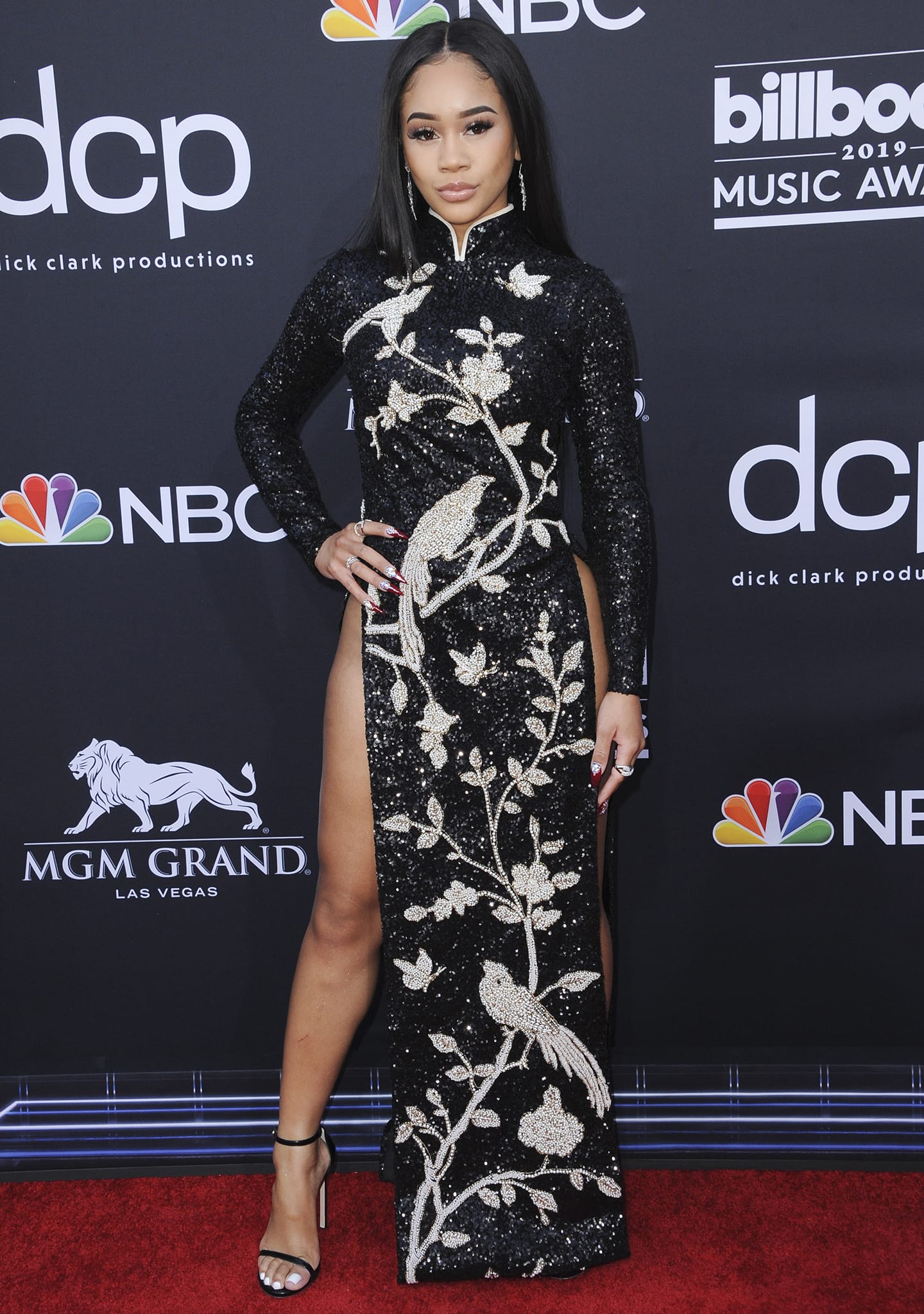 Her 2019 hit single My Type, off her second EP Icy, has put her name on the map. It was her first single to enter the top 40 hits on the Billboard Hot 100, and it has earned her her first BET Award nomination for Best Female Hip Hop Artist.

What Is Saweetie’s Net Worth?

Saweetie is estimated to have a net worth of $4 million.

The multi-platinum-selling rapper has soared to mainstream fame during the lockdown and she has no plans of slowing down. 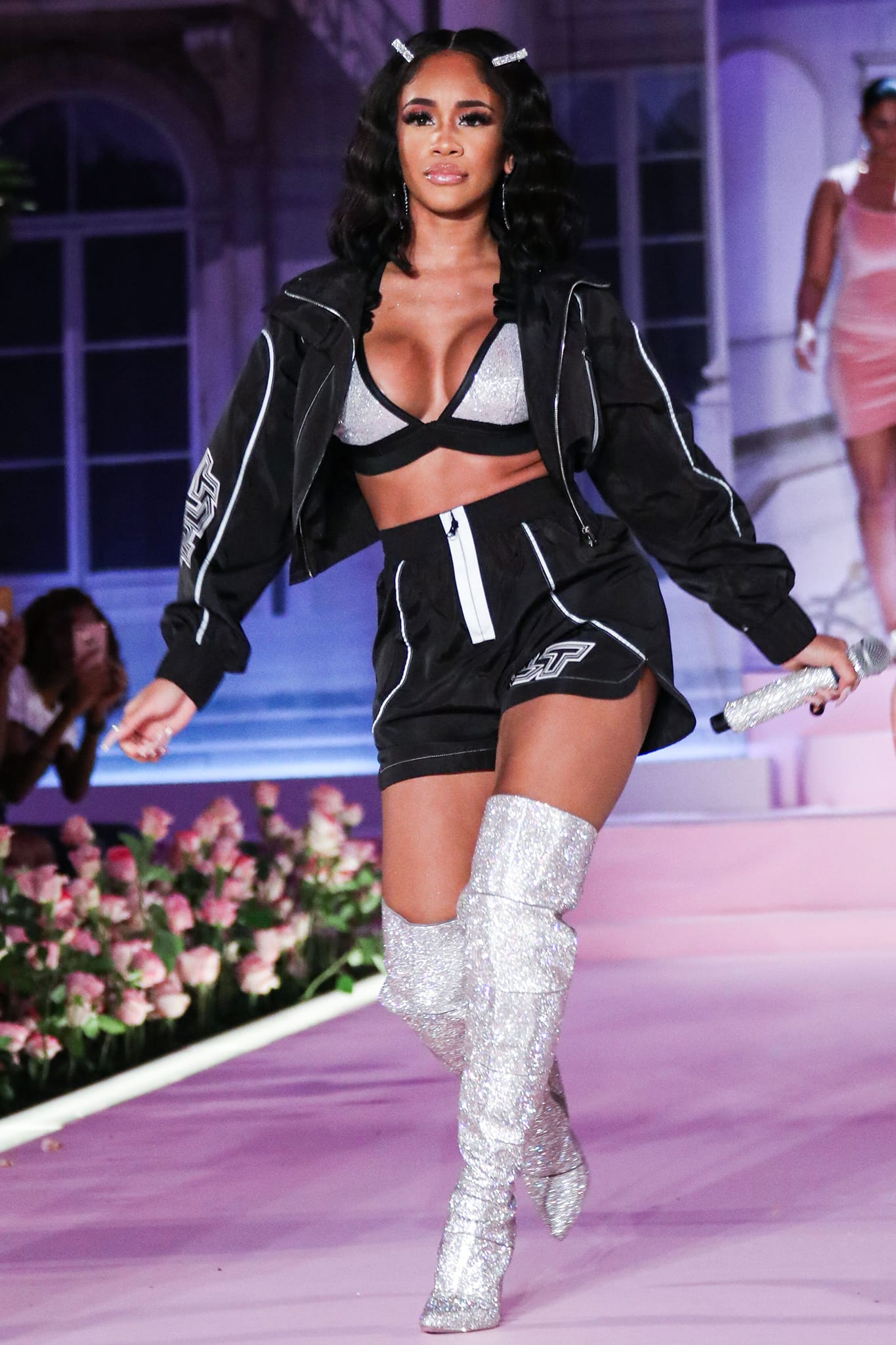 Aside from her music career, Saweetie has also ventured into the fashion business. She collaborated on a 59-piece clothing collection with Pretty Little Thing in 2019 and has created her own line of merch through her brand Icy Girl.

In 2020, she landed a spot on Forbes’ 30 Under 30 Music list. She has also launched a jewelry line, a capsule clothing collection, and a makeup collection with Morphe.

J.Lo Found the Best Pants to Wear With a Crop Top