Famous American actress Kate Hudson has been acting since 1996 at just 16 years old. However, the Los Angeles native was not the first in her family to rise to fame.

Hudson is the daughter of the Oscar award-winning actress Goldie Hawn and actor and comedian Bill Hudson. Although Hudson takes her father’s name, she claims that she has little relationship with her biological father due to her parents’ divorce when she was only 18 months old. 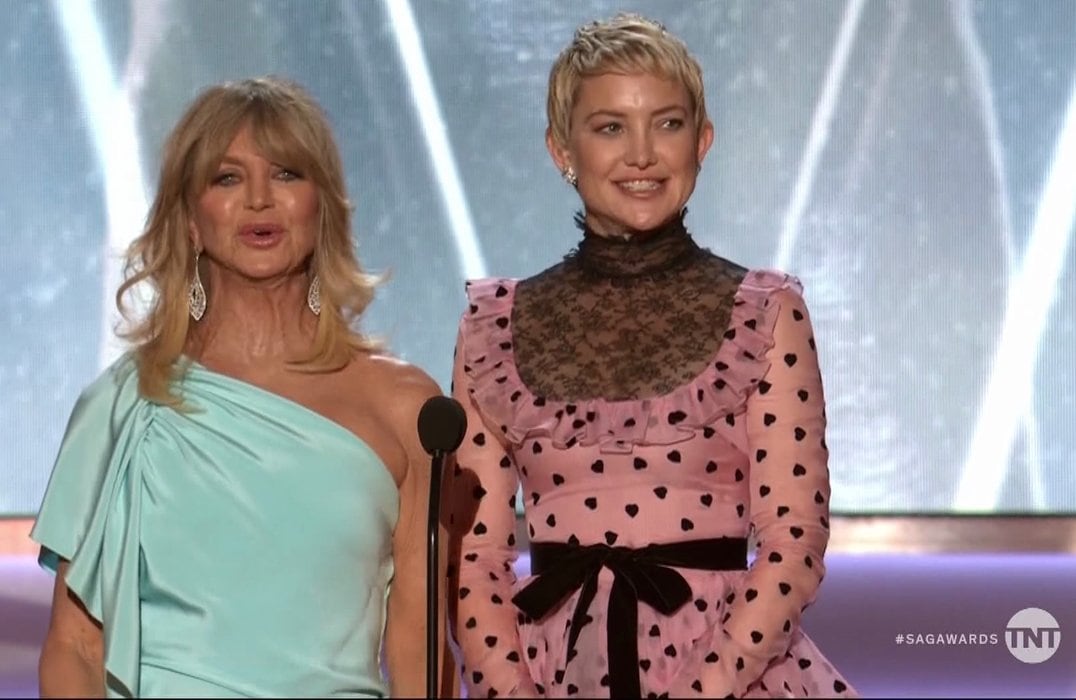 Hudson claims her mother’s longtime boyfriend Kurt Russell to be her father, who was by her side during her upbringing. Throughout her childhood, she was always singing and dancing with a yearning for the stage.

Although she had her humble start in small roles on television shows in 1996, she put her name on the map only four years into her career at 21 years old and since 2000, she has become a household name as a widely-known film actress.

Hudson has taken on a wide variety of roles in iconic films like How to Lose a Guy in 10 Days, Fool’s Gold, You, Me and Dupree, Almost Famous, and Bride Wars. So let’s go through Kate Hudson’s top 10 movies throughout her career according to critic reviews!

The movie Wish I Was Here is an American comedy-drama starring Zach Braff and Kate Hudson as the leading characters Aidan Bloom and his wife Sarah. 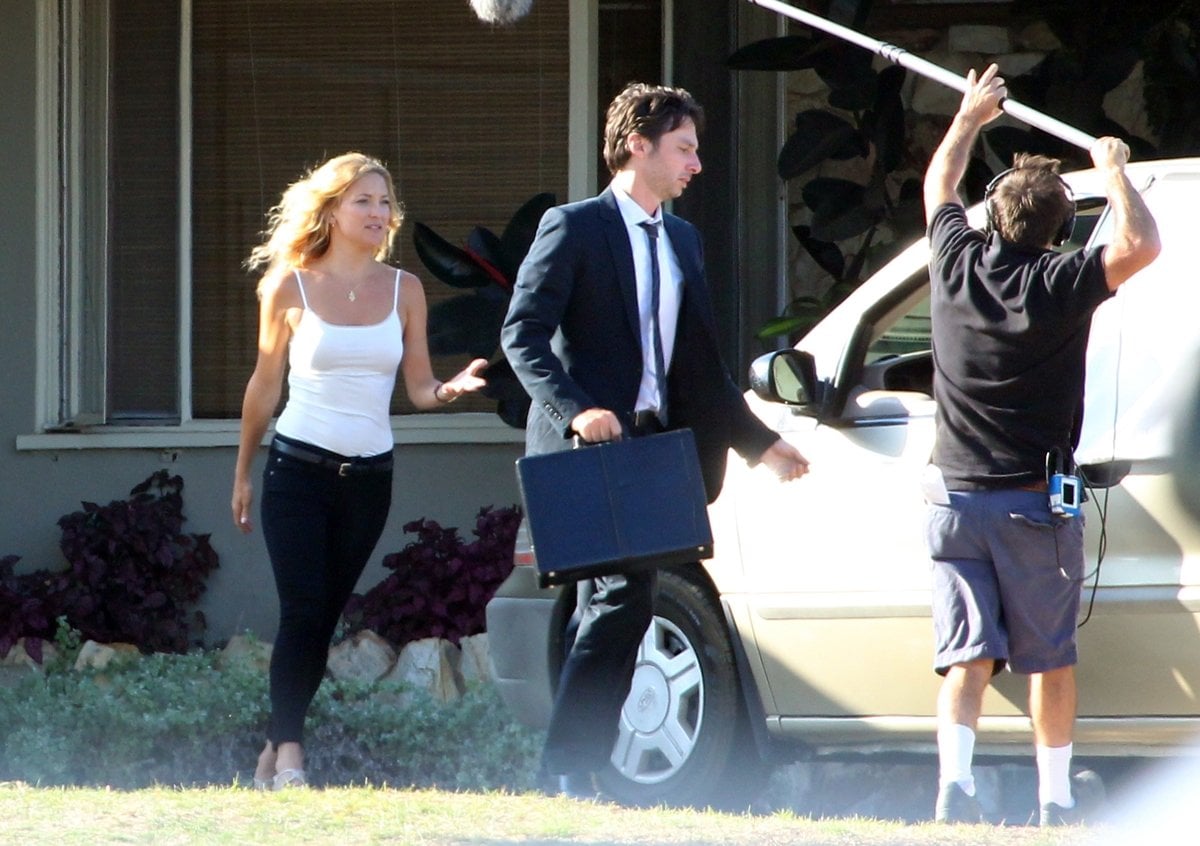 Kate Hudson as Sarah and Zach Braff as Aidan filming Wish I Was Here in Los Angeles on August 13, 2013 (Credit: WENN)

The film is a story about a couple who are financially struggling to send their two children, Tucker and Grace, to a good school. They enlist the help of Aidan’s father who later reveals his cancer relapse.

This then changes the course of direction for the Blooms who decide to homeschool their children so that they can reallocate children’s school money to Aidan’s father’s cancer treatment. Aidan goes through an unexpected self-discovery journey as he homeschools his children.

Hudson, who was 35 years old when the film was released, plays Aidan’s wife, Sarah, who serves as the main source of income for the family by working an office desk job with data. According to reviews, the film was given a 47% approval rating on Rotten Tomatoes. 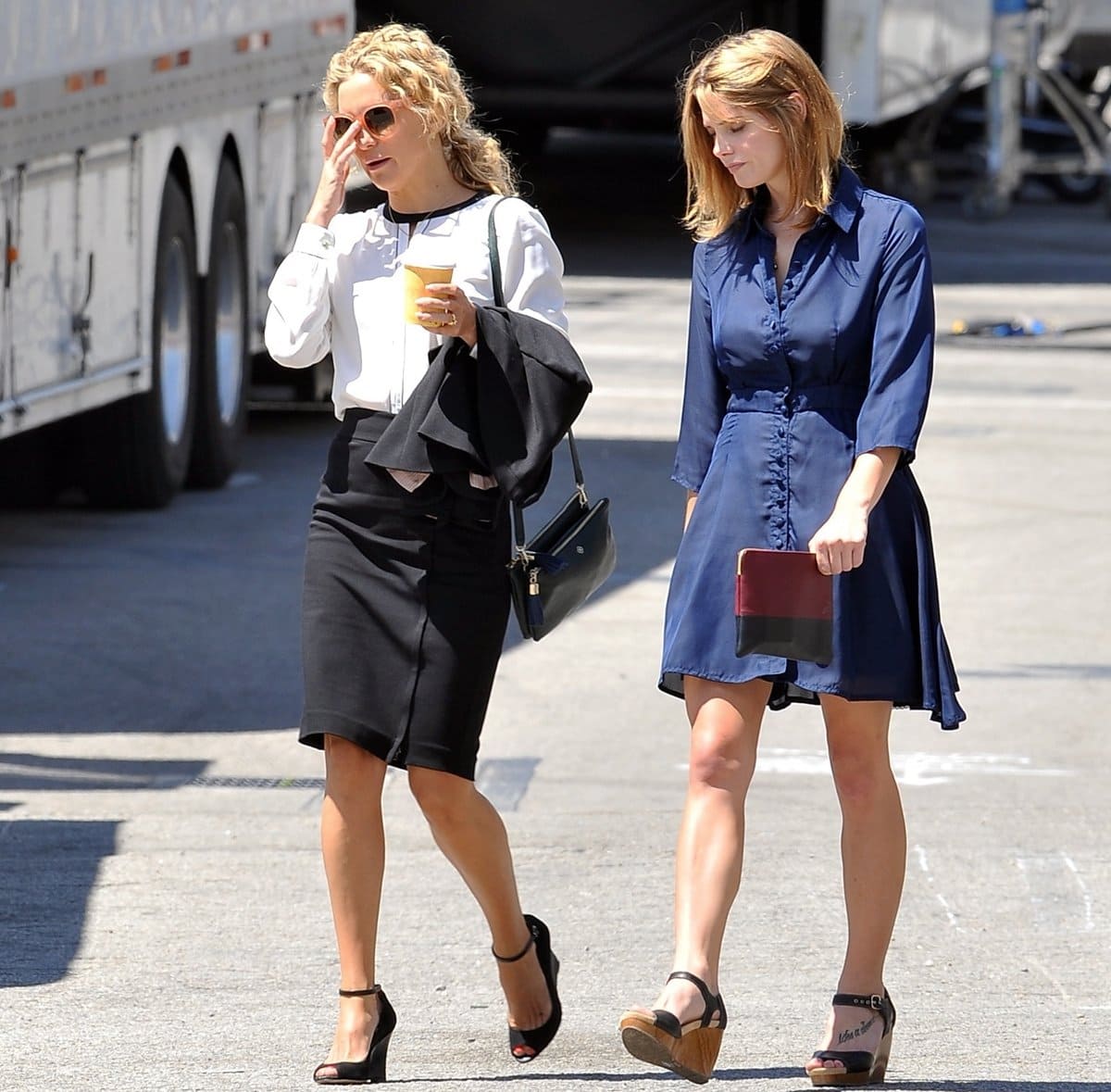 Ashley Greene and Kate Hudson on the set of the 2014 American comedy-drama film Wish I Was Here (Credit: Cousart / JFXimages / WENN)

Multiple reviews have stated that although the purpose of the film is heartwarming, the film is still relatively average. The film was directed by starring actor Zach Braff as well as co-written by Braff and his brother Adam Braff.

It was later revealed that Hudson had read the script and complemented Braff for the writing, to which he responded with an offer to her to join the cast.

Kate Hudson as Ford’s schoolteacher girlfriend Amy Stanton in The Killer Inside Me (Credit: IFC Films)

This film is the second adaptation; the first adaptation of the book was released in 1976 starring Stacy Keach, Susan Tyrrell, and Tisha Sterling.

The Killer Inside Me is the story about Lou Ford, played by Affleck, who is a sheriff’s deputy in Texas who ends up getting romantically involved with a prostitute before unraveling into a spree of violent murders in his town.

Hudson, who was 31 years old at the time of release, played Amy Stanton, who is a school teacher and Affleck’s girlfriend and later fiance in the film. 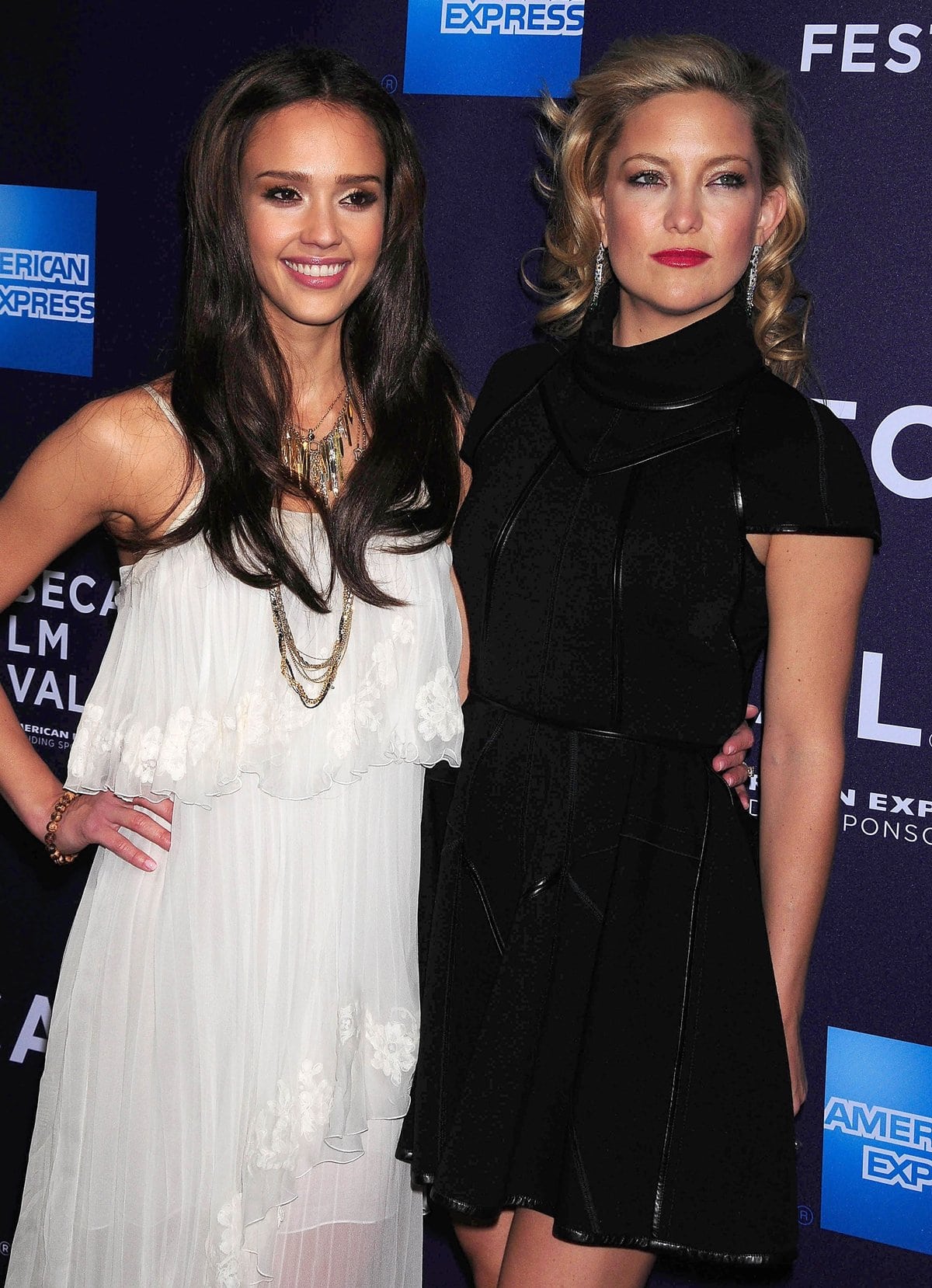 Jessica Alba and Kate Hudson attend the “The Killer Inside Me” premiere during the 9th Annual Tribeca Film Festival at the SVA Theater on April 27, 2010, in New York City (Credit: WENN)

The film received a slightly higher rating of 54% on Rotten Tomatoes, although it also received mixed reviews from critics. While the stylistic filming was well-received, the lack of emotional closeness to the characters in the film was found as one of its biggest downfalls.

The film is a fictional post-9/11 world revolving around the story of a Pakistani man named Changez Khan and his treatment towards Americans as a result of the 9/11 attacks.

Hudson, who was 33 years old, played Erica, who is an American photographer who ends up in a romantic relationship with Riz Ahmed’s character and film protagonist, Changez Khan. 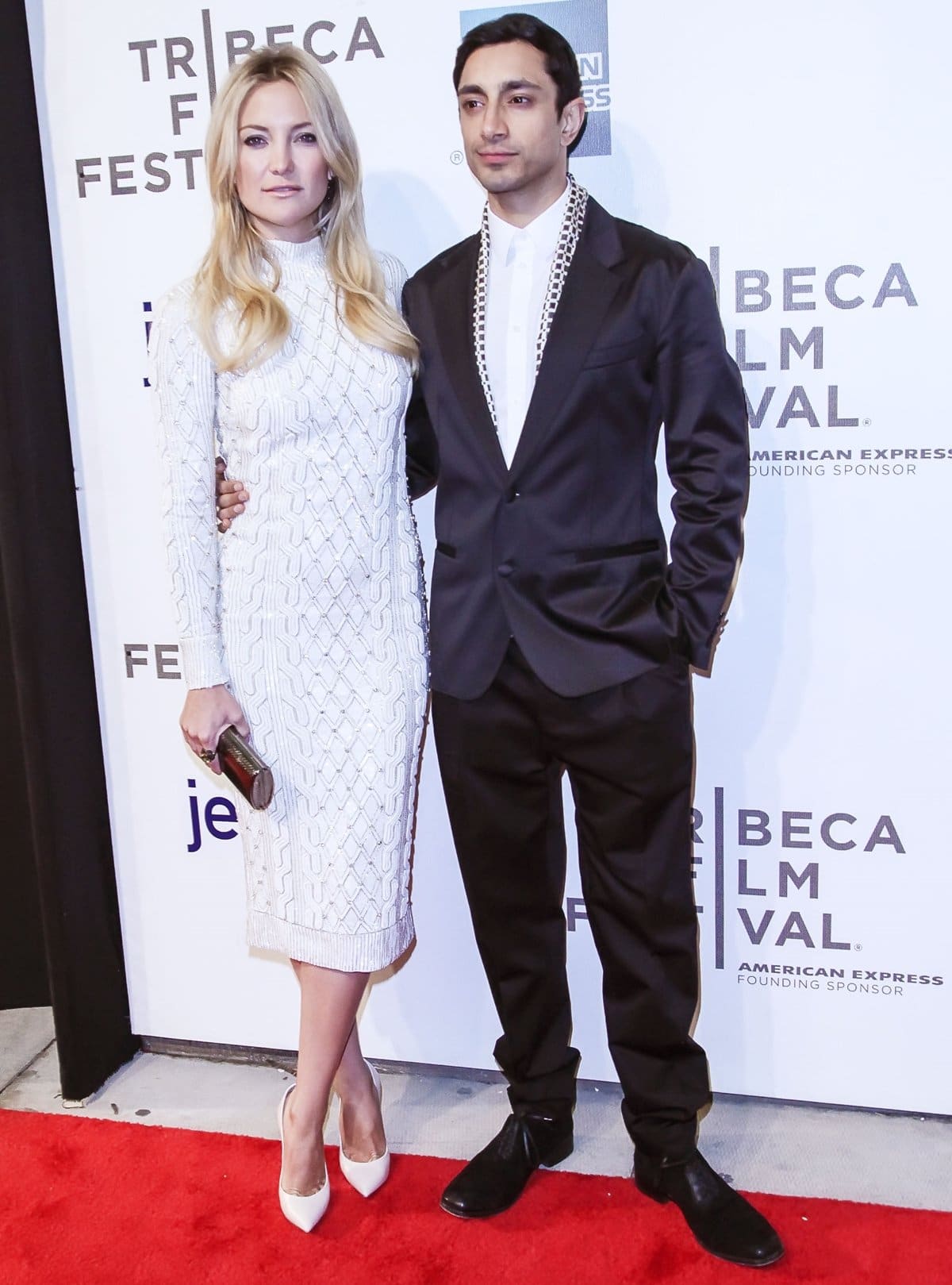 The Reluctant Fundamentalist only received reviews barely higher than The Killer Inside Me, receiving an approval score of 57% on Rotten Tomatoes.

Again, the reviews were very mixed due to the positive reception of the acting and cinematography but poor communication to the audience regarding the purpose and meaning of the story.

Gere starred as Dr. Sullivan Travis, aka “Dr. T”, who is a rich gynecologist who has multiple encounters with a variety of women on a daily basis. The relationships he has with all of these women vary from his wife, to his children, to his coworkers, to secret affair partners. 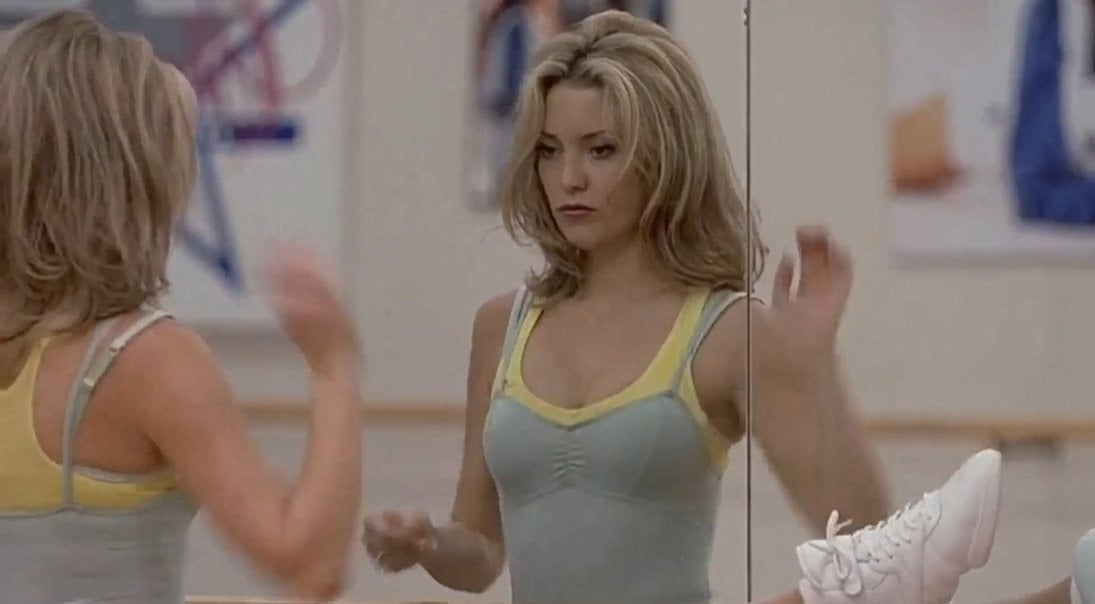 Hudson plays Dr. T’s eldest daughter Dee Dee who is a college student planning her wedding but is later revealed to be secretly romantically involved with her maid of honor Marilyn, who is played by Liv Tyler.

The film was released when Hudson was only 21 years old but also only received a 57% approval score on Rotten Tomatoes with most reviews stating the movie is good but still overall average.

The film, which was co-written by Larry David himself, follows the story of a man named Nathan Flomm, played by David, who is a former business associate of Will Haney, played by Jon Hamm. 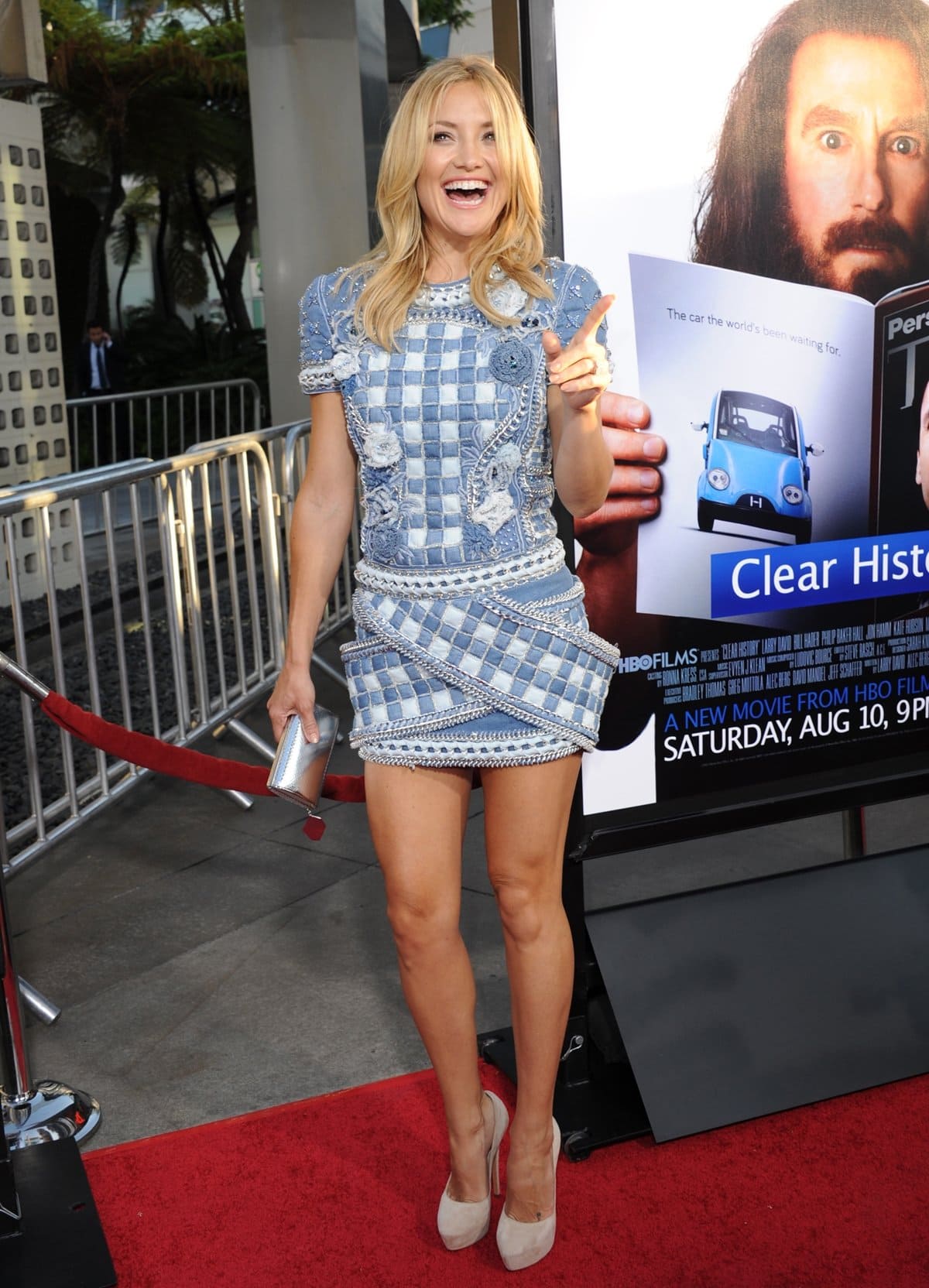 A decade later, Flomm moves to the island Martha’s Vineyard to start a new life only to find Haney later also coming to Martha’s Vineyard with his wife Rhonda, portrayed by 34-year-old Hudson, to build a mansion. Flomm, infuriated by the arrival of Haney, devises a plan to take revenge on his former boss, Haney.

Although a highly beloved actor and comedian, Clear History was noted as not one of David’s best works. The film received subpar reviews from critics with some stating that this film was not up to David’s usual high standards.

Across the board from multiple critics, the film received average ratings at best, which was also reflected in its 54% approval score on Rotten Tomatoes.

About Adam is a romantic comedy about a young man with a unique seductive charm named Adam who meets Lucy, played by 21-year-old Hudson, in a restaurant and soon becomes intertwined with not only Lucy but also her two sisters Laura and Alice, played by Frances O’Connor and Charlotte Bradley respectively. 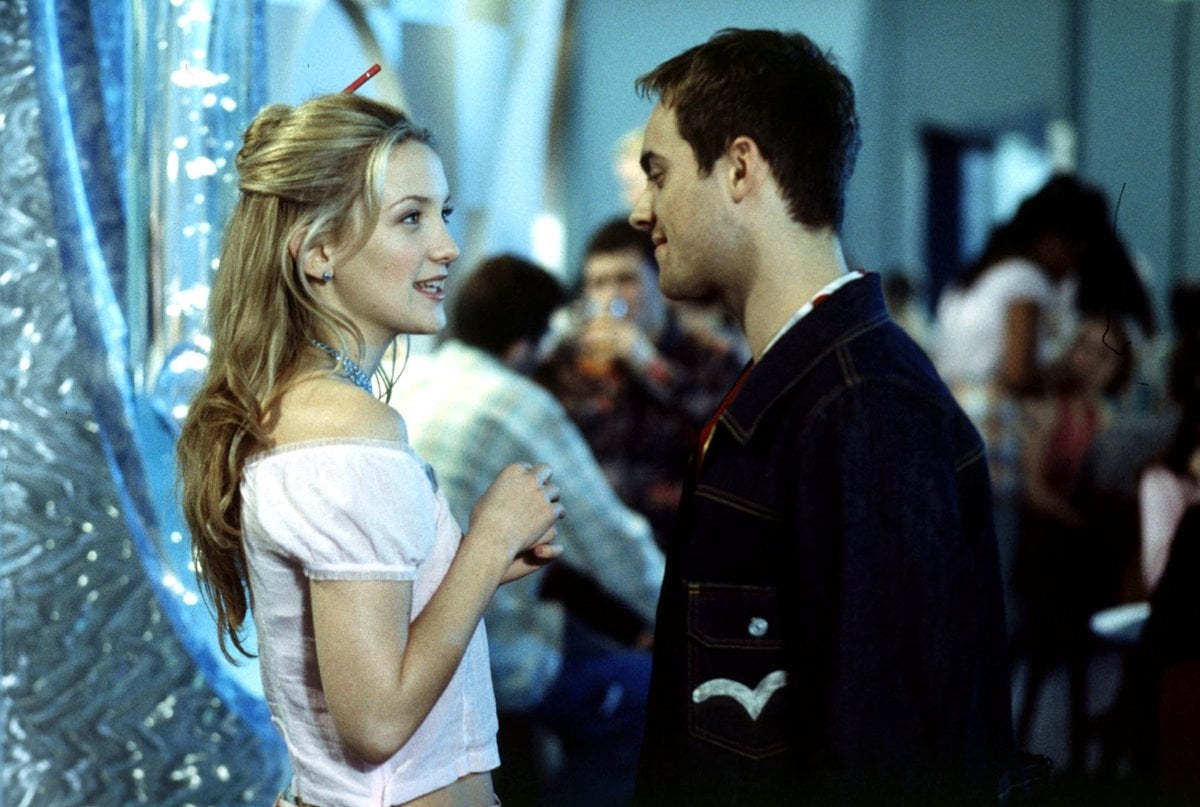 Kate Hudson as Lucy Owens and Stuart Townsend as the young Dubliner Adam in the 2000 romantic comedy film About Adam (Credit: Miramax Films)

This film is the first big jump in approval compared to numbers 6 – 10 on our list, although still standing heavily behind the top 4 films on our list.

About Adam received a 68% approval score on Rotten Tomatoes with many reviews praising the gritty side and seduction of the film. However, the film ultimately still did not receive any particularly high reviews.

The film follows the story of Chadwick Boseman, who played Thurgood Marshall who later became the first African American Supreme Court Justice, and one of his first legal cases which was State of Connecticut v. Joseph Spell. 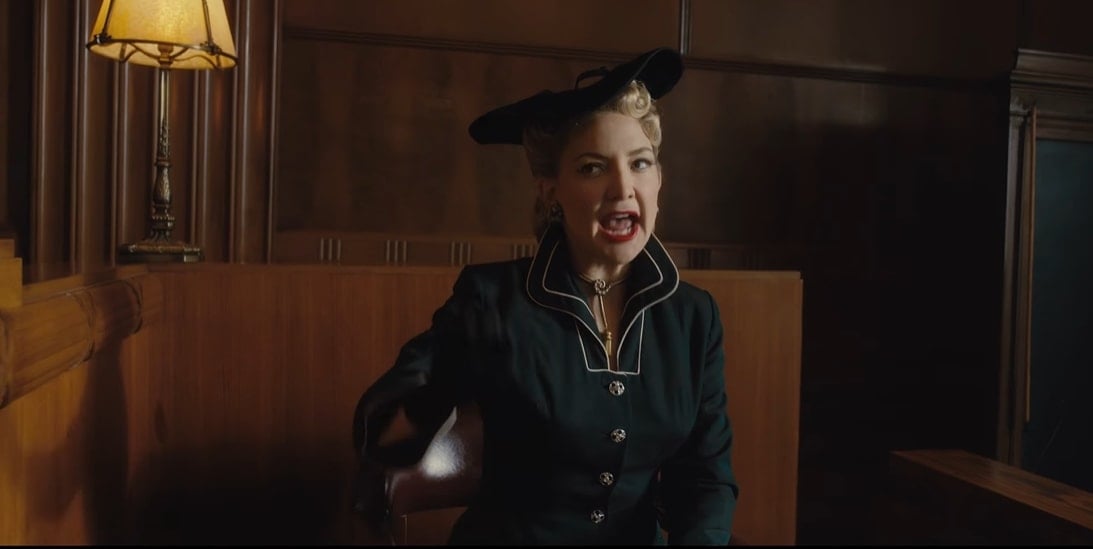 This film was mostly well-received by critics, earning itself an 81% approval rating on Rotten Tomatoes as well as great praise for the structure of the film.

The film follows one specific case of Marshall’s as a way to display his life as opposed to a lifelong biography, which was well received by reviewers of the film. Marshall was nominated in the 90th Academy Awards for Best Original Song for “Stand Up for Something”.

The film is based on the real-life Deepwater Horizon explosion and oil spill that occurred in the Gulf of Mexico in 2010. It is also an adaptation of The New York Times article “Deepwater Horizon’s Final Hours” written by David Barstow, David Rohde, and Stephanie Saul. 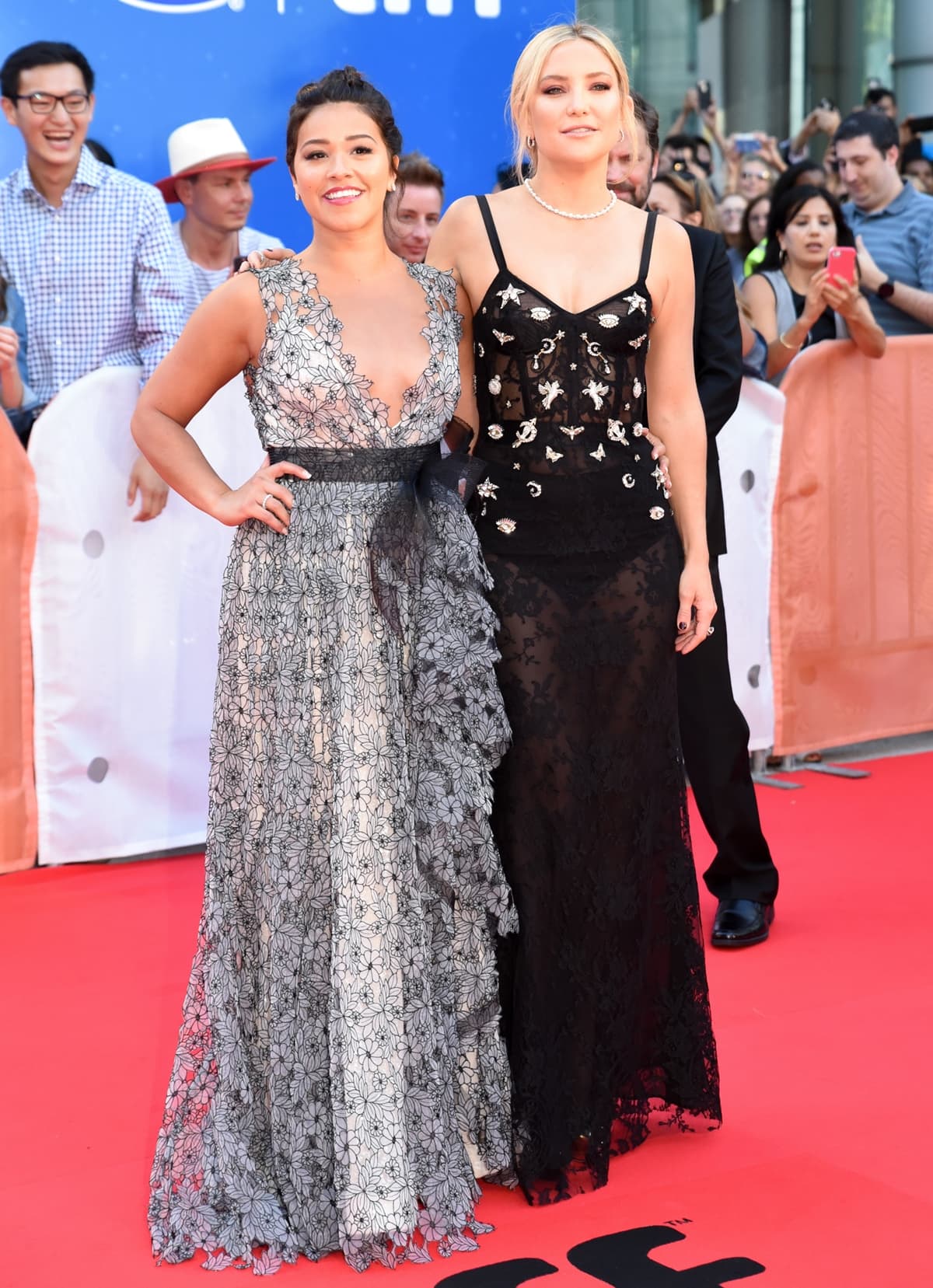 The film reveals the real-life incident in which a drilling rig exploded and caused a huge fireball that resulted in the death of multiple crew members. Husdon, who was 37 at the time of release, played Felicia Williams who is the wife of protagonist Mike Williams, who is played by Mark Wahlberg.

Although the film had a somewhat disappointing box office opening weekend, the film was still generally well-received by critics and ultimately received an approval rating of 83% on Rotten Tomatoes.

Some critics noted the film’s attention to accuracy to the real-life events, however, it was later revealed that former crew members who had survived the real Deepwater Horizon explosion had attempted to create their own documentary before the film’s release due to their frustration over the portrayal of what had happened by the media and in the script.

Coming in as a close second is Kung Fu Panda 3, which is the third installment of the Kung Fu Panda series that revolves around the story of a panda in China who is prophesied as the legendary Dragon Warrior.

The panda Po Ping, voiced by Jack Black, goes on various adventures with his fellow anthropomorphic animal friends in his journey to prove his worthiness as Dragon Warrior. Hudson joined the franchise at 37 years old as Mei Mei, a giant female panda who is a resident in the secret panda village. 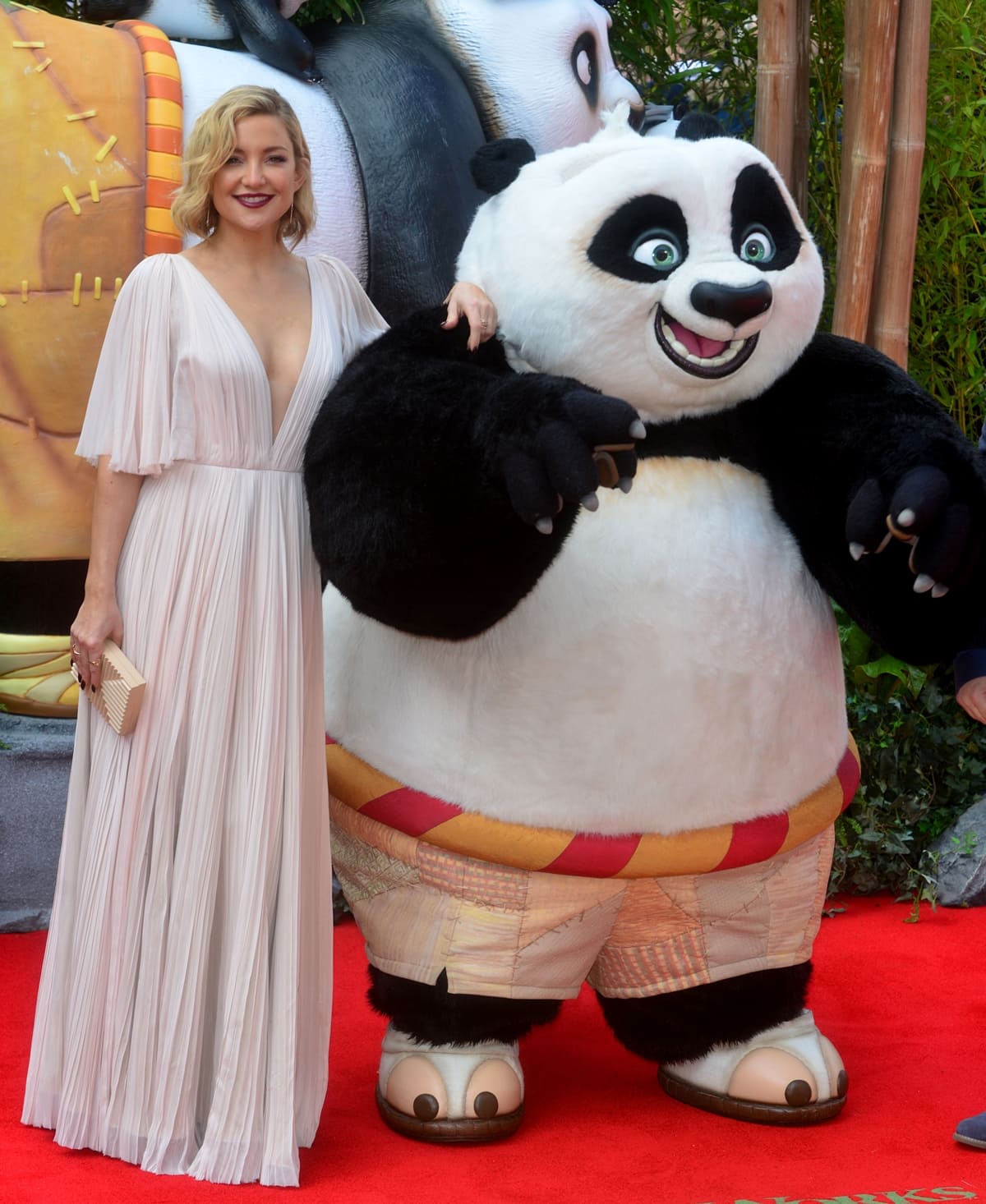 Kate Hudson posing as Po at the European Premiere of Kung Fu Panda 3 at the Odeon Leicester Square in London, England, on March 6, 2016 (Credit: WENN)

The first two films in the series were so well received that they each were nominated for an Academy Award for the category of Best Animated Feature, however, neither film won. Kung Fu Panda 3 was not nominated for this award but still received high reviews nonetheless.

Topping our list is Almost Famous, which was Hudson’s breakthrough film that put her on the map as an actress to watch out for at only 21 years old. The American comedy-drama stars Billy Crudup, Frances McDormand, Kate Hudson, and Patrick Fugit.

The film revolves around the story of Fugit’s character William Miller and his journey as a teenage journalist for Rolling Stone in 1970 and his efforts to get a cover story published while he tours with his band Stillwater. 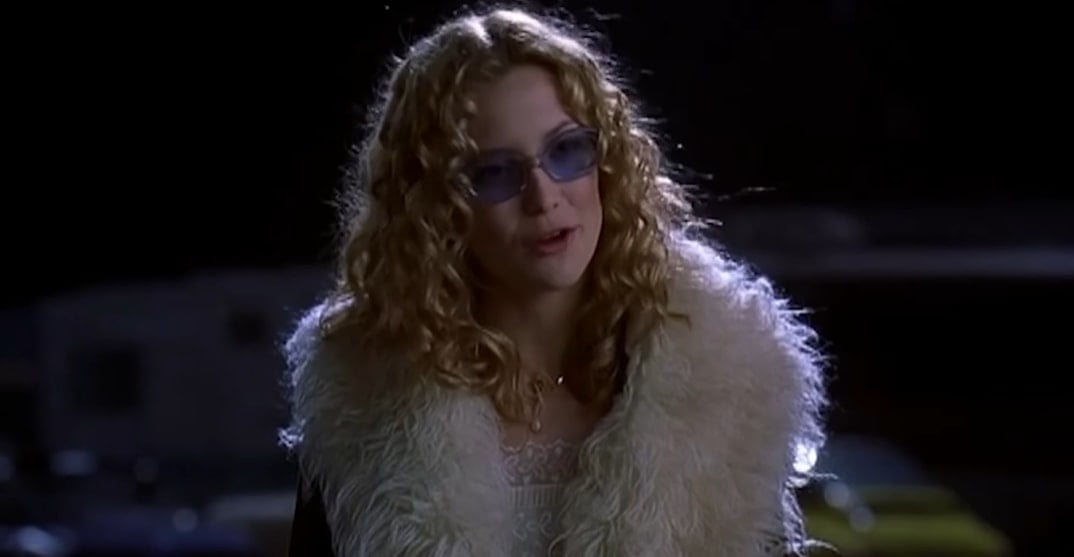 Hudson plays Penny Lane, a huge groupie for Stillwater who forms a relationship with Willam. This film holds Hudson’s highest approval rating of 89% on Rotten Tomatoes with high reviews of the acting as well as world-building.

The film went on to land four Oscar nominations including one win for Best Original Screenplay. It later won a Grammy for Best Compilation Soundtrack Album for a Motion Picture as well as two Golden Globes for Best Motion Picture and Best Supporting Actress – Motion Picture, which Hudson herself won. 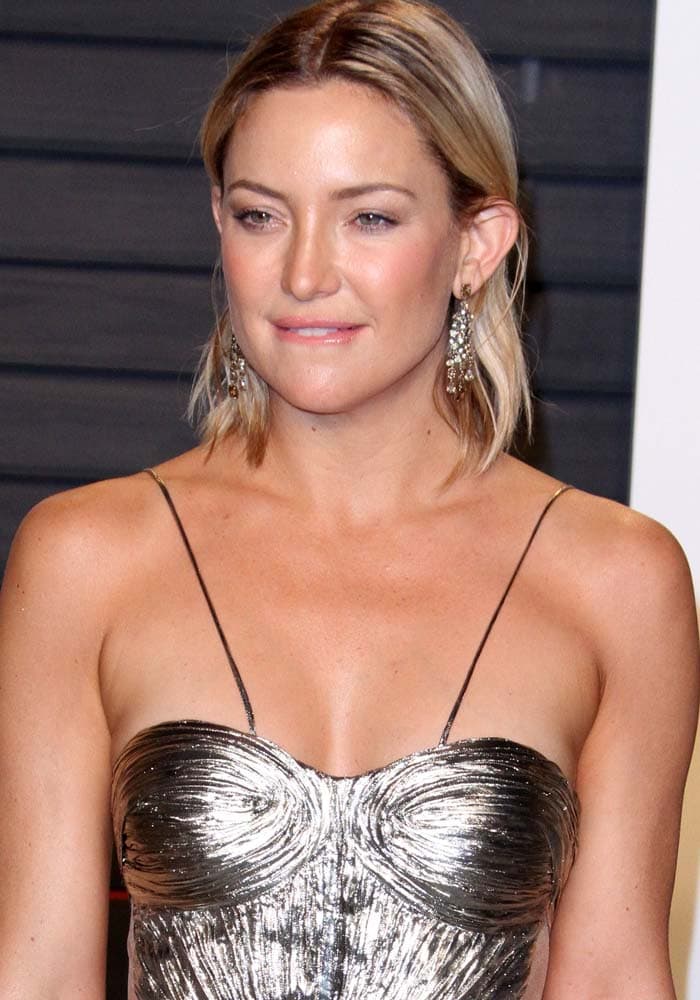 Kate Hudson wears her hair back at the 2016 Vanity Fair Oscar Party held on February 28, 2016, at the Wallis Annenberg Center for the Performing Arts in Los Angeles (Credit: Adriana M. Barraza / WENN)

In February 2016, it was no surprise that everyone wanted to celebrate with Leonardo DiCaprio after the actor snagged his much-anticipated first Oscar — and that included the beautiful Kate Hudson.

The actress had not received an invite to the Oscars ceremony, but she sure made waves at the Vanity Fair Oscars After Party in Los Angeles. 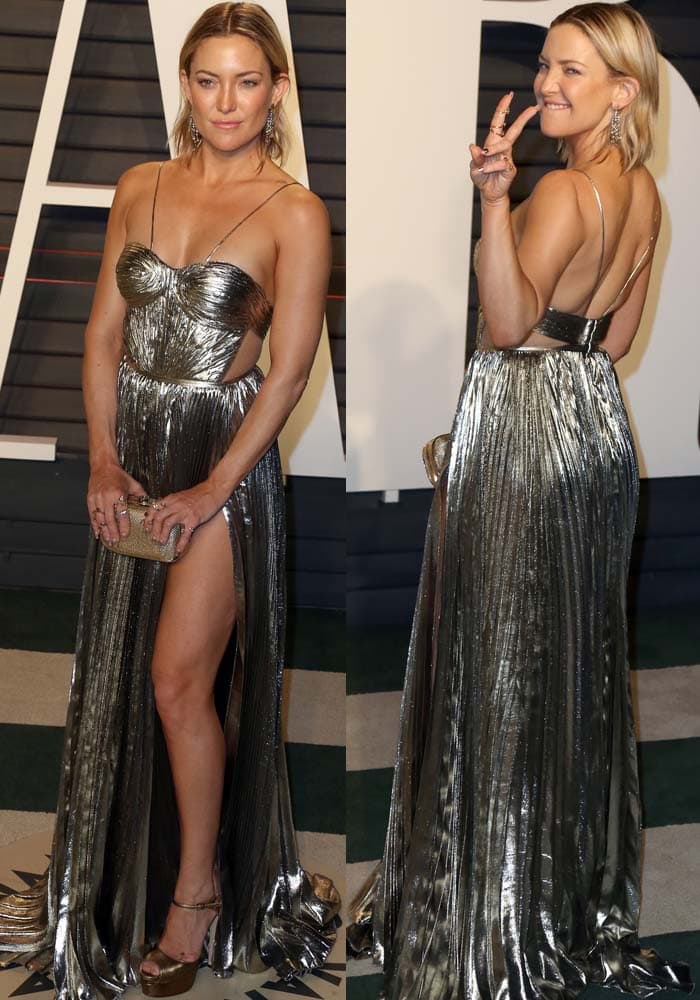 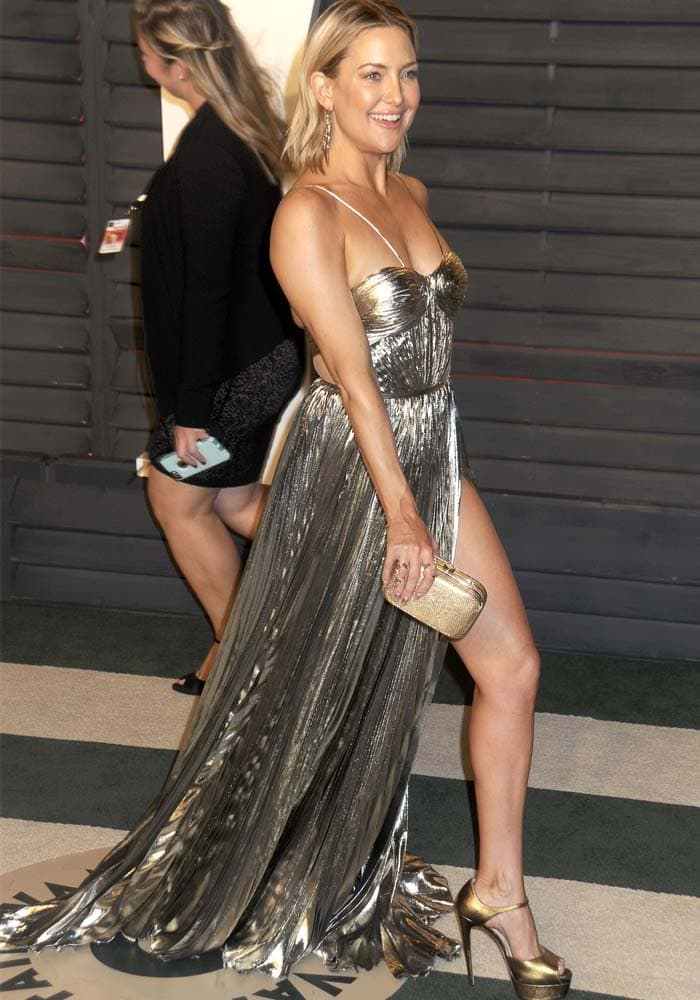 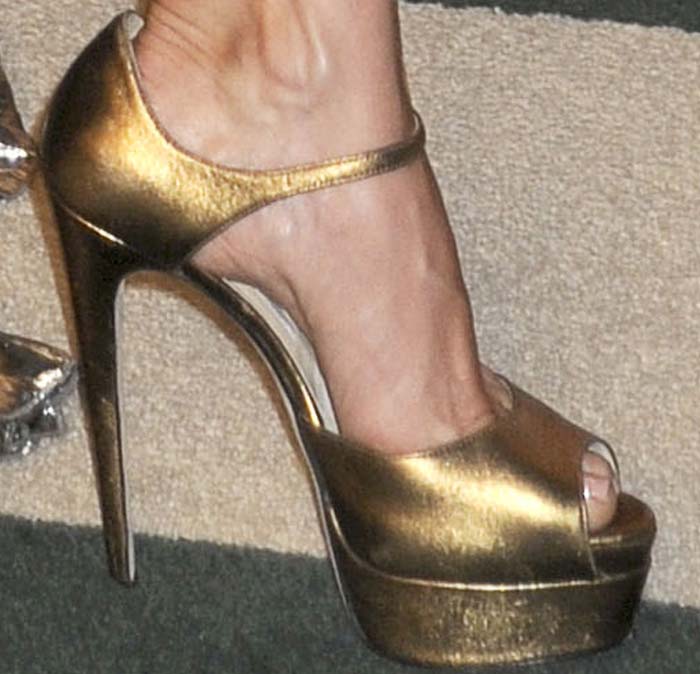 When Kate was asked whether she was going to start a dance party with Leonardo DiCaprio, she gave an enthusiastic yes. 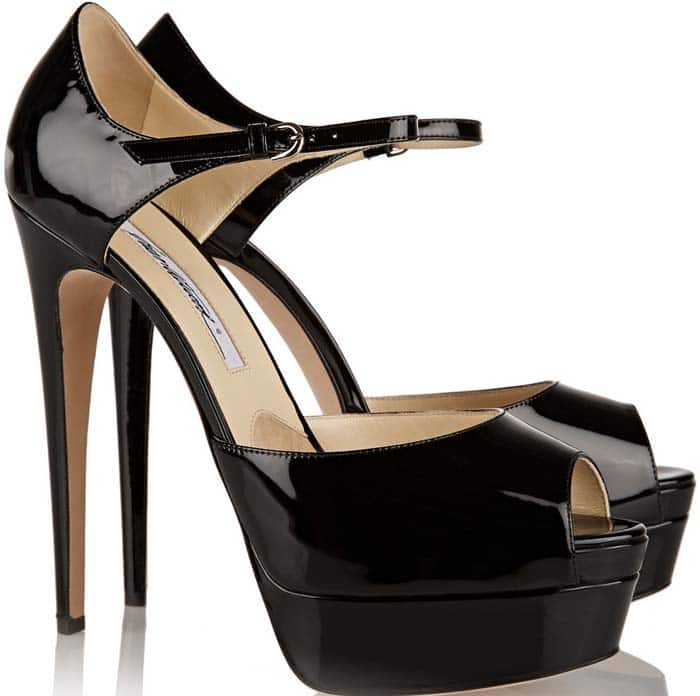 If the Fujifilm GFX 50S II is Real, We Want to See This