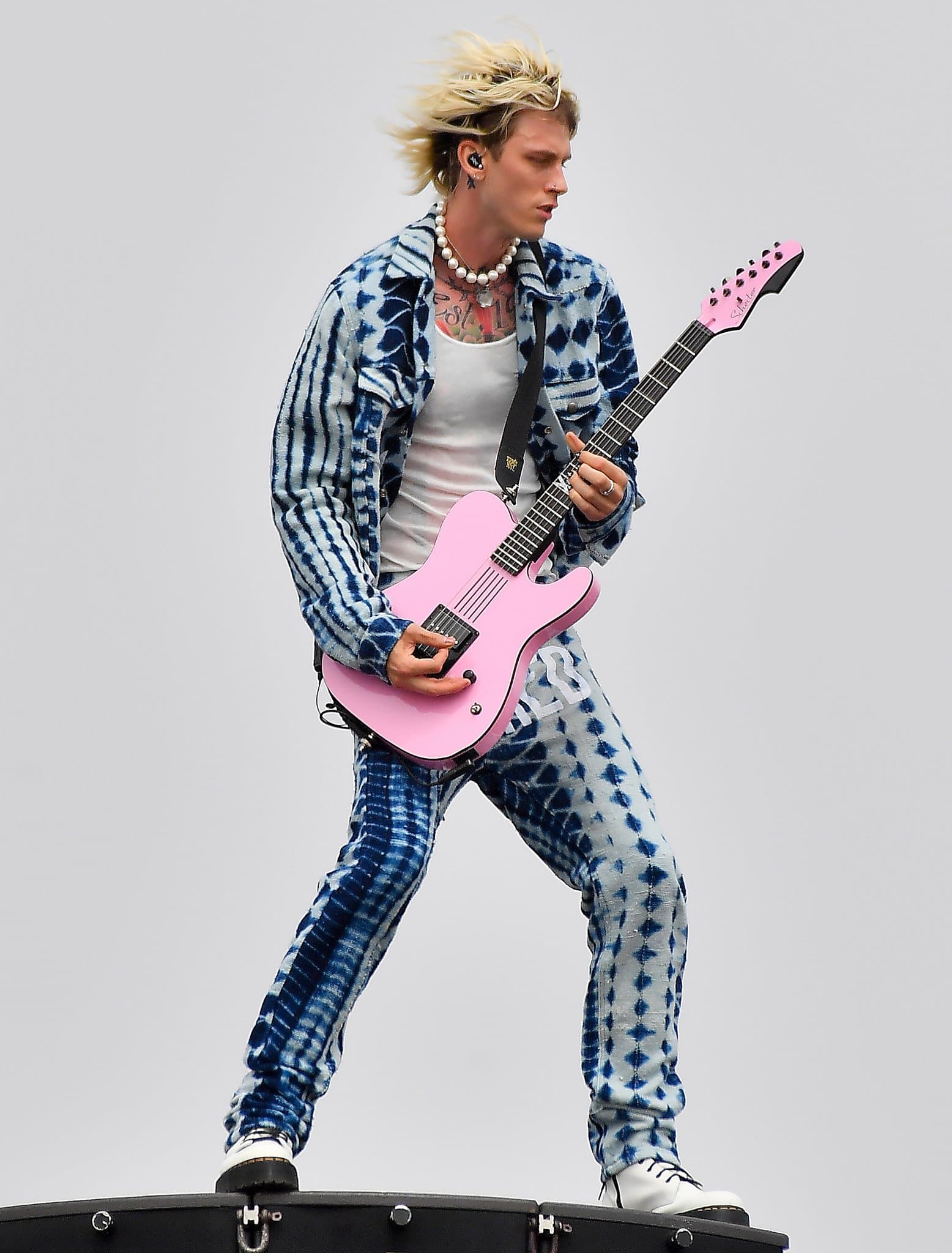 MKG, whose real name is Colson Baker, performed a 13-song set with his live band together with Blink 182 drummer Travis Baker, who produced and co-wrote songs on the pop-punk album. 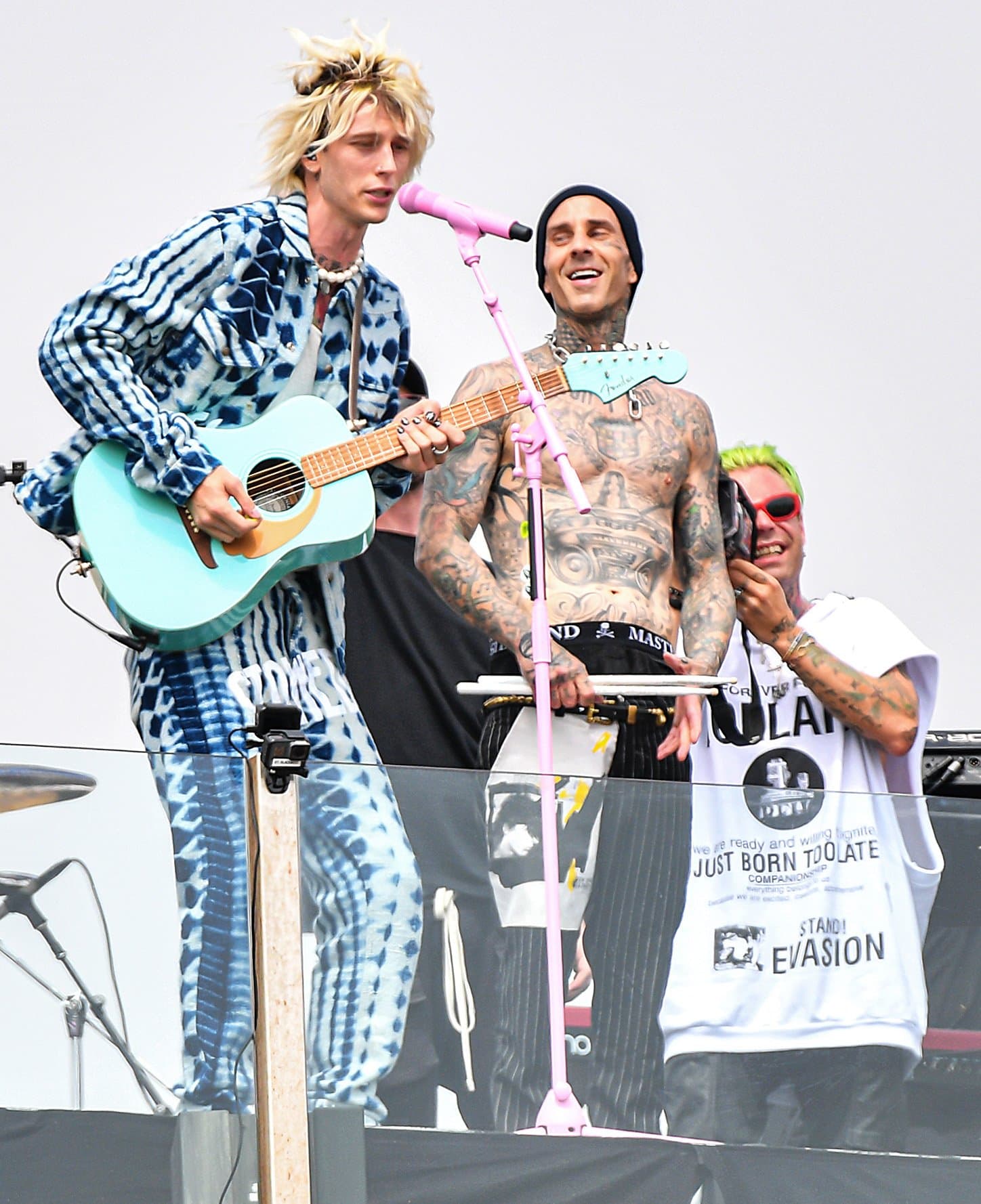 Also in attendance at the impromptu concert were MKG’s girlfriend Megan Fox and Travis’ new girl Kourtney Kardashian, who brought along her best friend, Addison Rae. 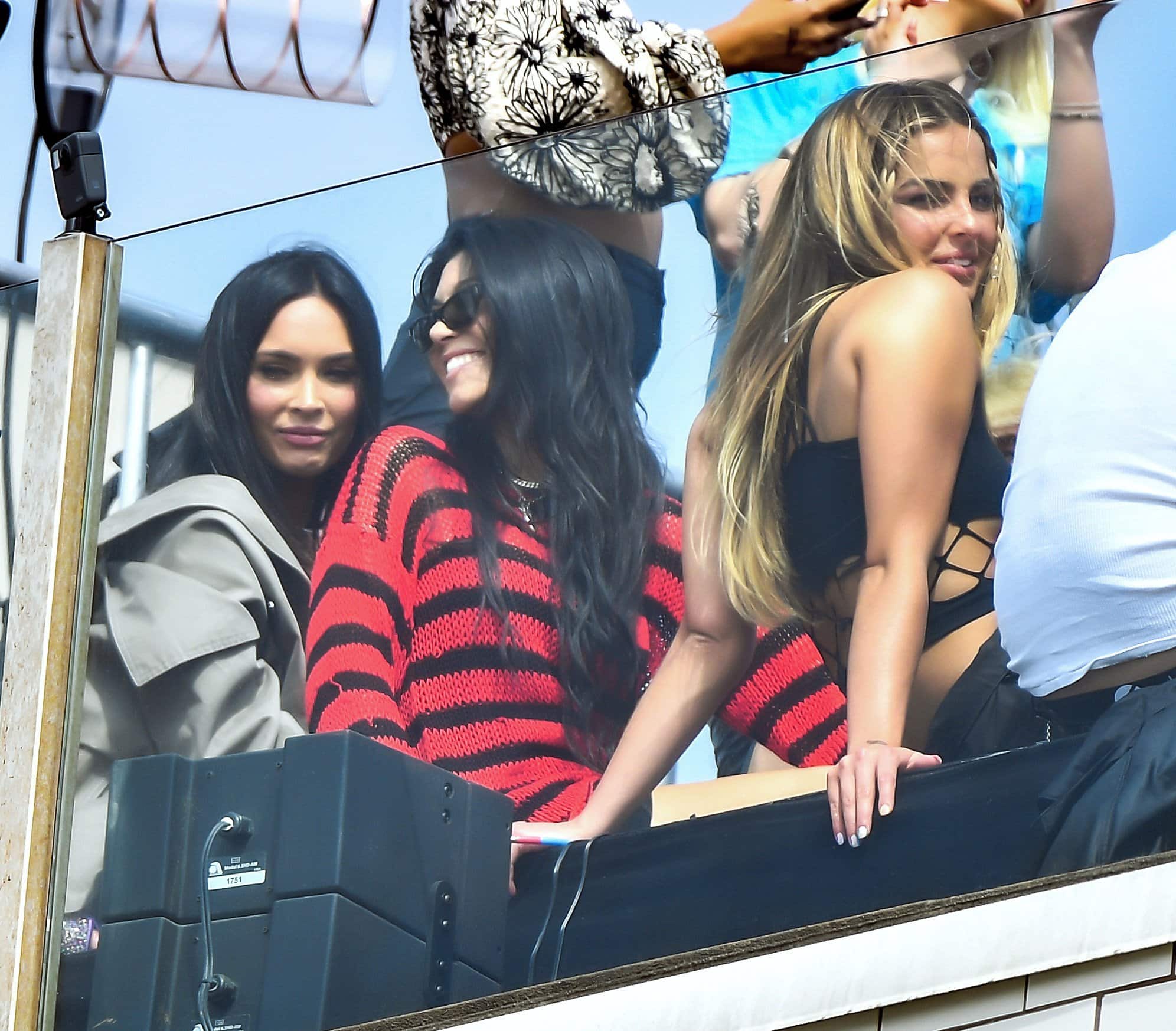 Looking every inch the supportive girlfriend, Megan was all smiles as she joined MKG on the rooftop stage.

For the occasion, she went with her signature sultry style and showed off her cleavage and toned abs in a beige Alexander Wang cropped corset bra paired with Ksubi Chlo Wasted Overkast Khaos jeans.

For some coverage, she layered her look with an oversized beige trench coat from Acne Studios. 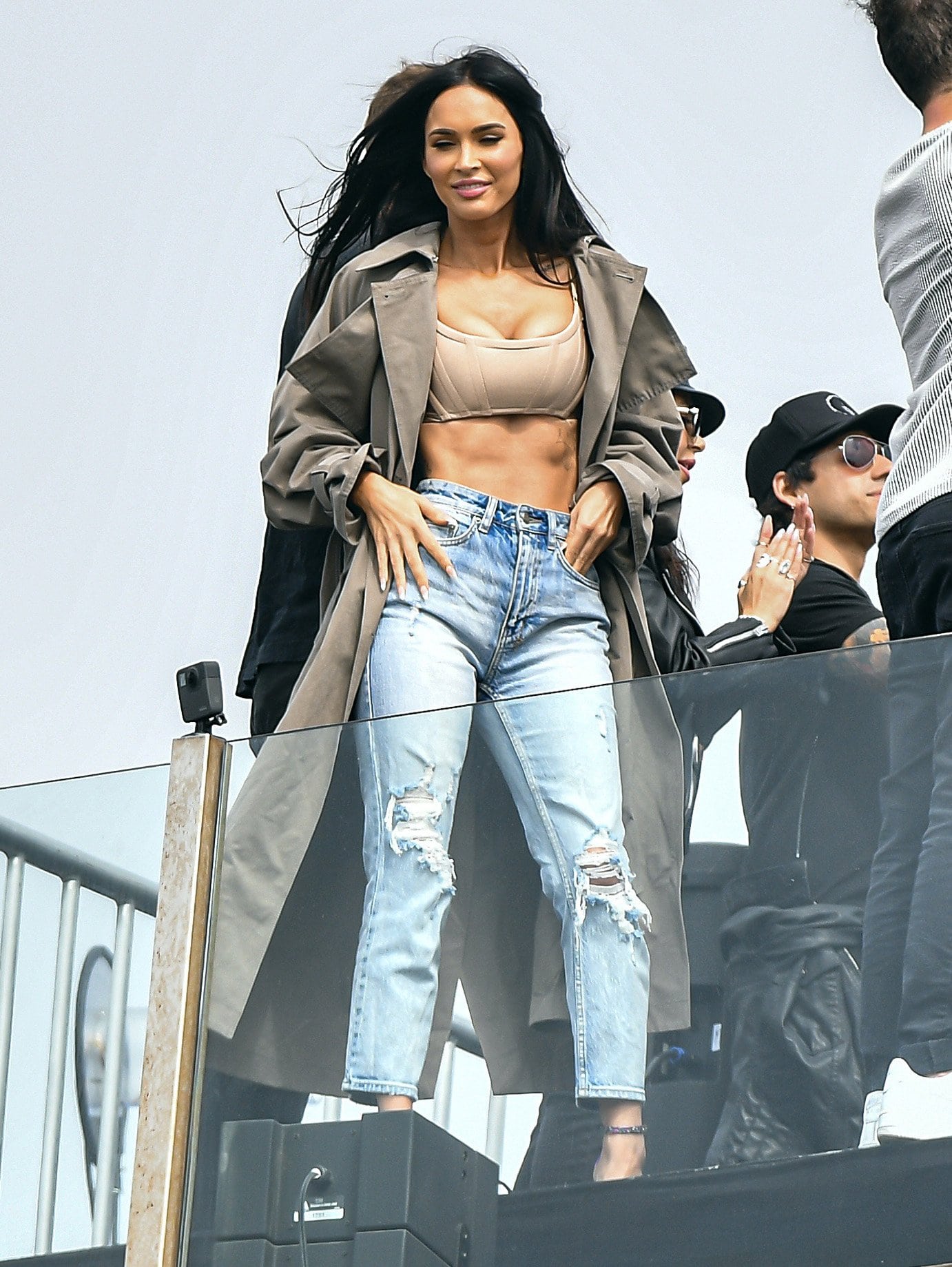 The “Jennifer’s Body” star skipped wearing jewelry and instead jazzed up her sexy outfit with a By Far Bougie bag in wild tiger-print pony hair.

She wore her signature dark locks sleek straight with a center parting and furthered the sultriness of her look with eyeliner, mascara, and a swipe of pink lipstick. 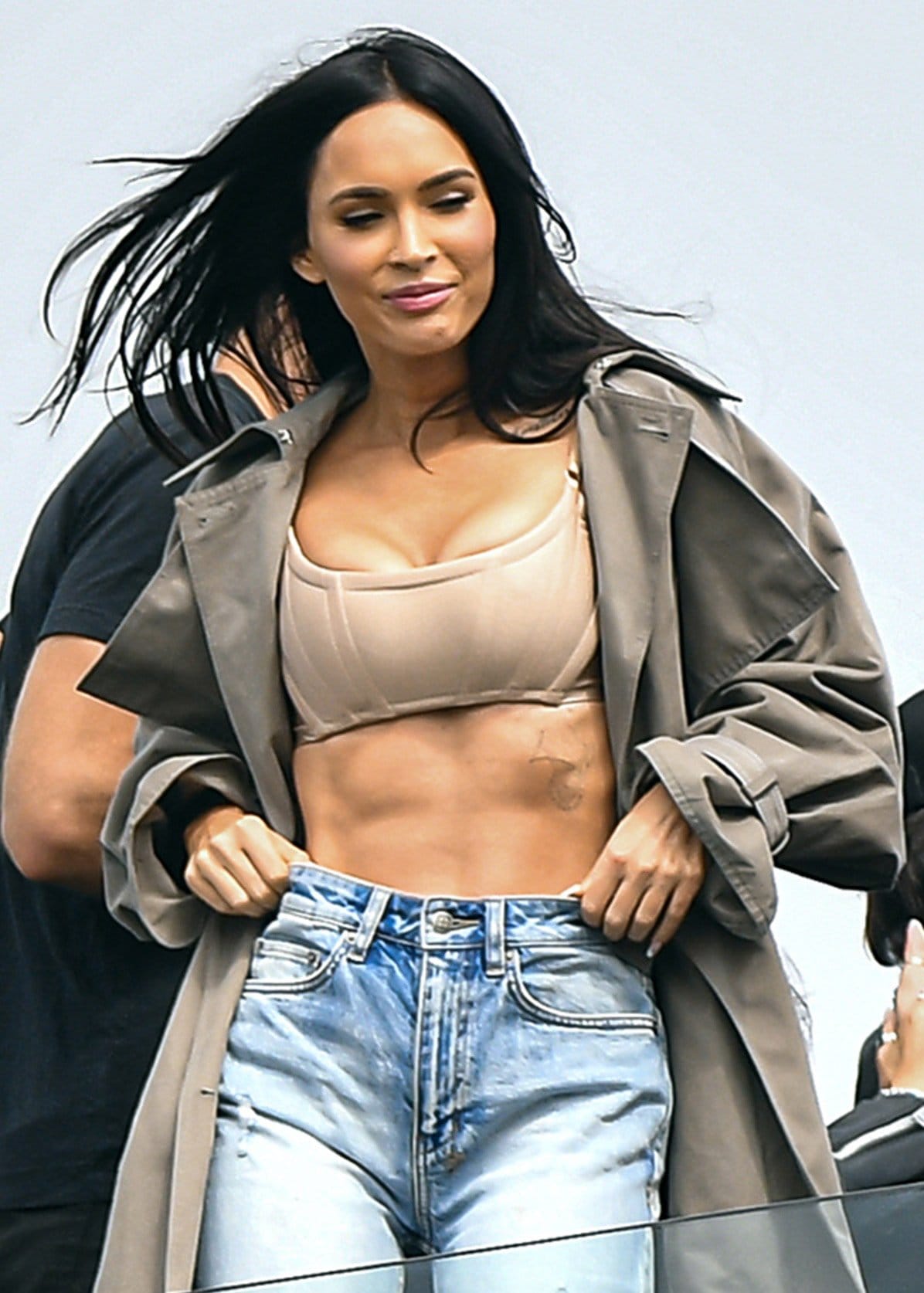 Giving her neutral look a dose of sparkle, the mom-of-three slipped into a pair of Amina Muaddi “Bianca” platform sandals.

They are covered with multicolored glitters and have an open-toe design with slender ankle straps, 1.5-inch platforms, and 4-inch signature flared heels. 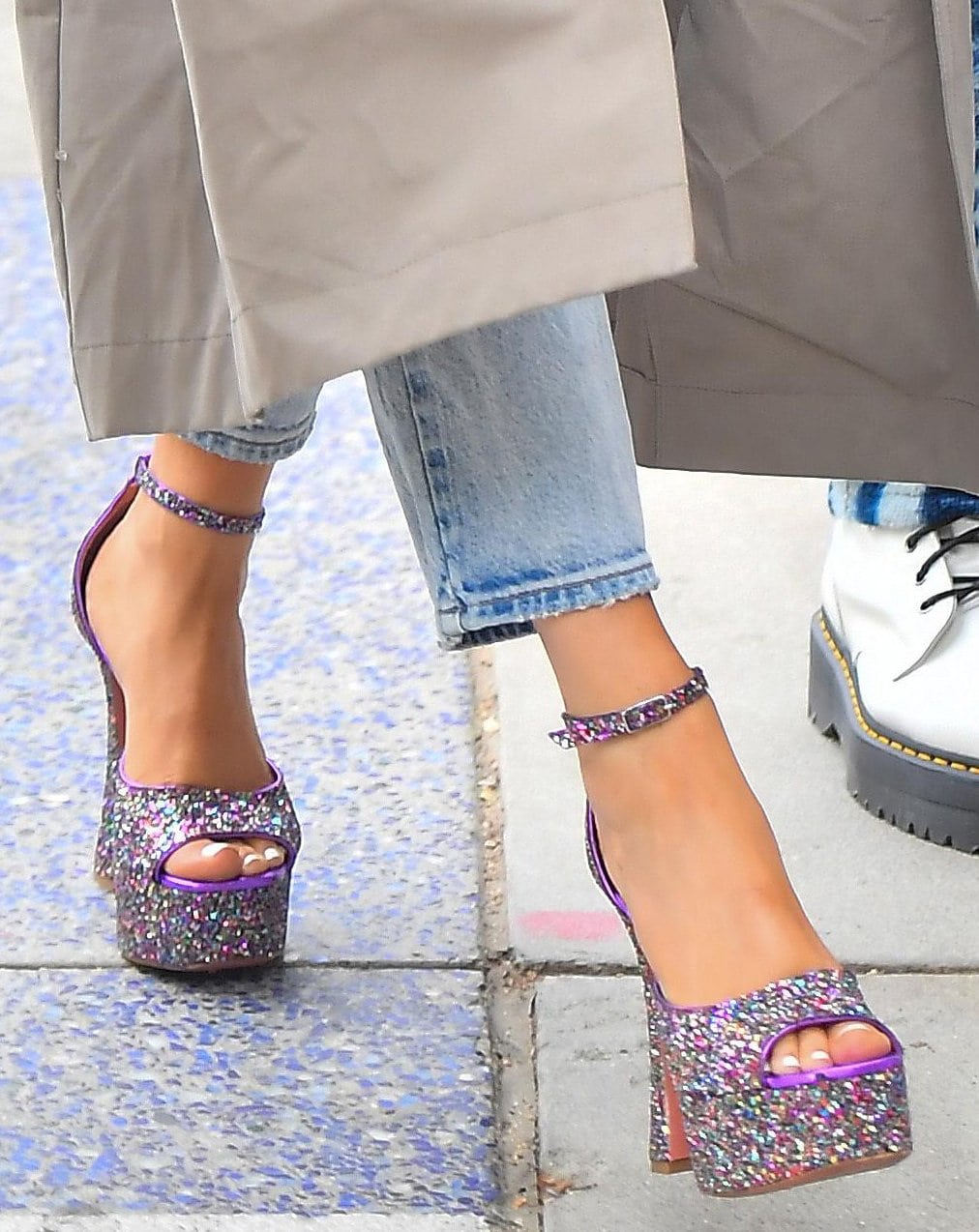 Meanwhile, MKG was hard to miss in his white top paired with a blue and white tie-dye-style jacket and matching pants.

He styled with an oversized pearl bead necklace, a crystal pendant necklace, a nose ring, and a pair of white Dr. Martens boots. 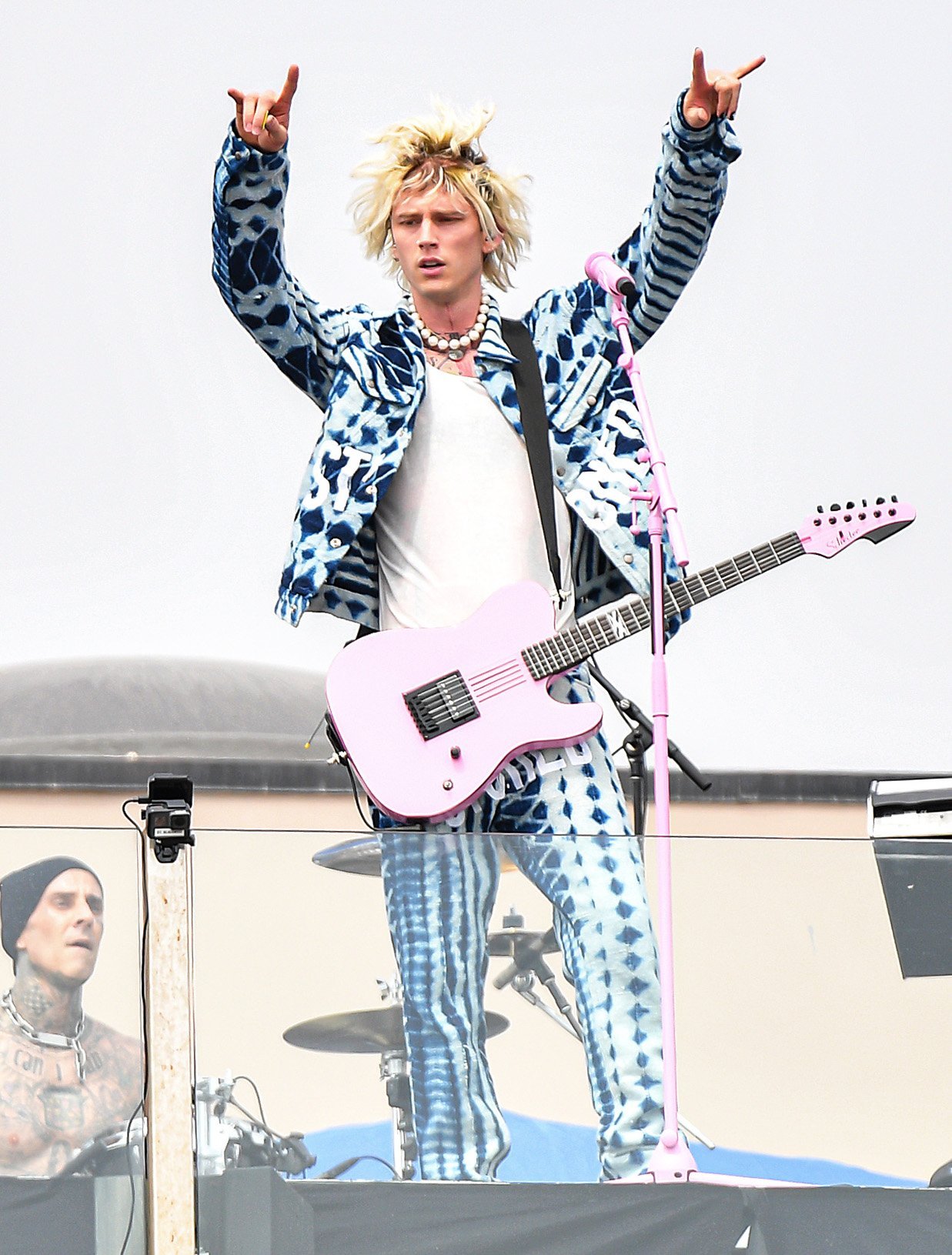 After the mini-concert, the couple went to dinner with MKG’s daughter Cassie, who wore a pink tee with black biker shorts and furry slides. 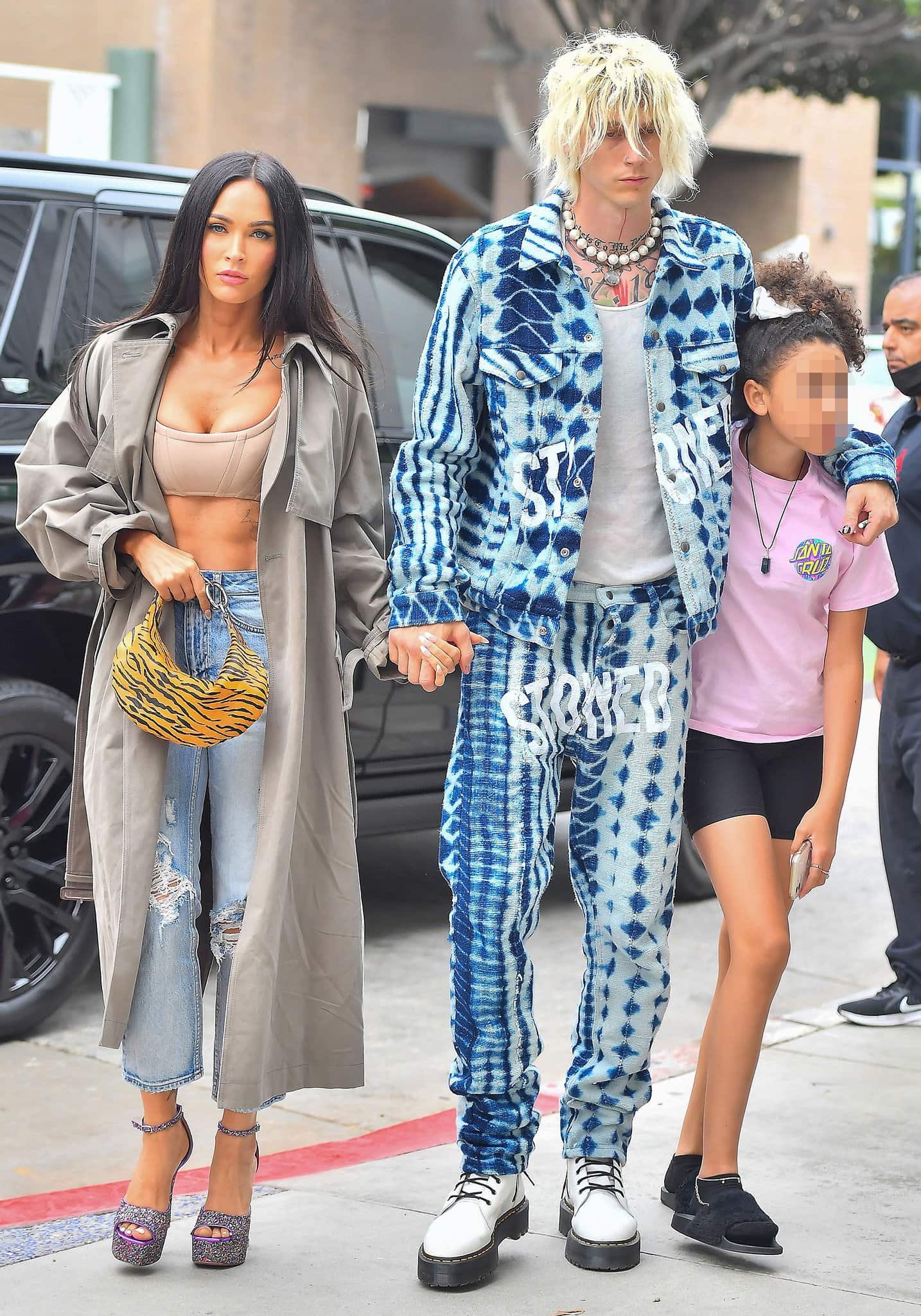 Megan Fox and Machine Gun Kelly head to dinner with his daughter Cassie in Santa Monica after the rooftop show (Credit: Mega / WENN)

During the show, Megan was seen chatting with Kourtney Kardashian, who turned up to support her new boyfriend, Travis Barker.

The 42-year-old socialite opted for a punk-inspired look, most likely influenced by his rockstar boyfriend.

She covered up in a Raf Simons black-and-red striped open-knit sweater, available for $654 at Matches Fashion, but put her legs on display in a black mini skirt. 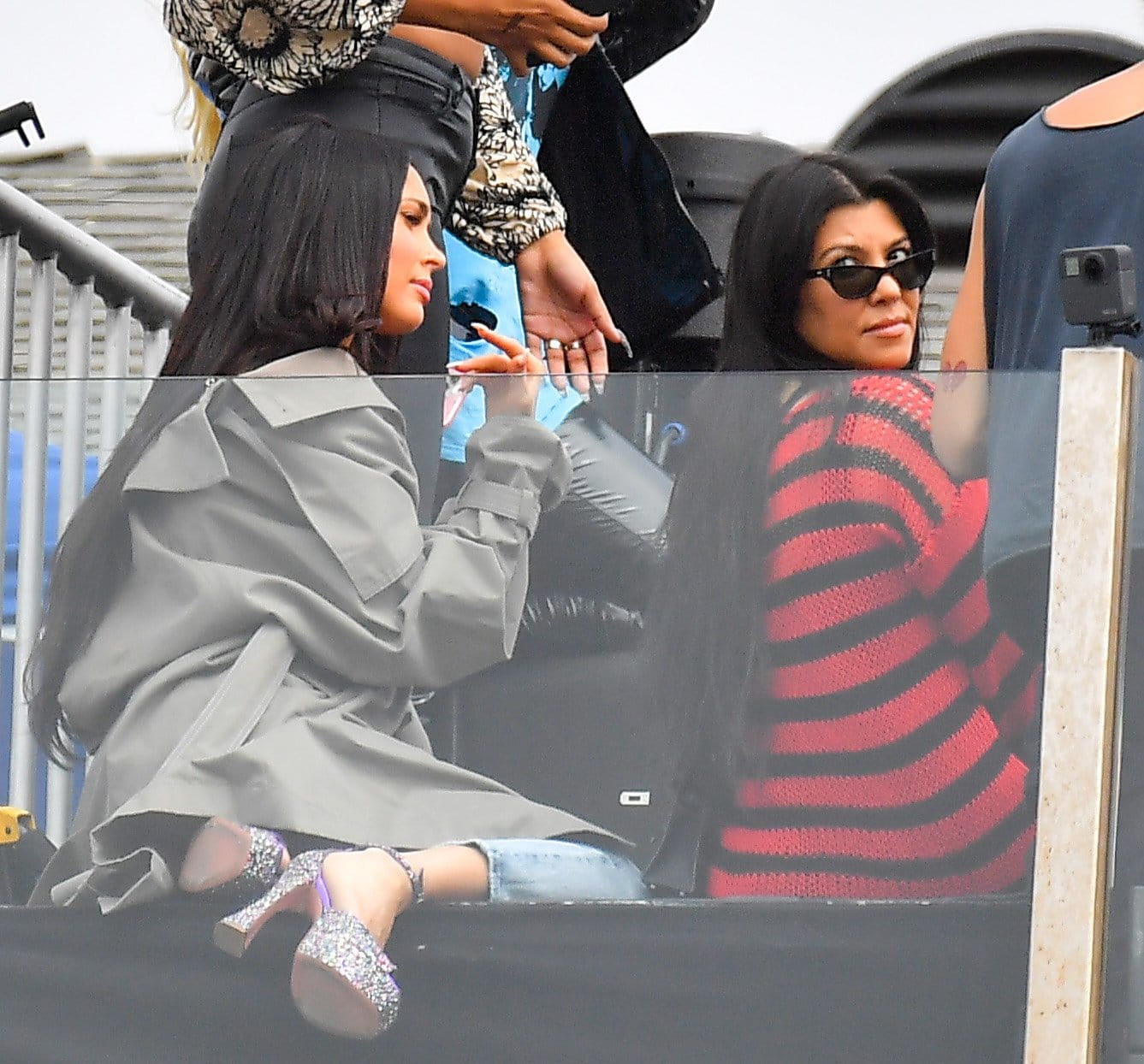 The KUWTK star wore her long raven tresses down and shielded her eyes with a pair of black sunglasses.

Continuing with the punk-rock theme of her look, the mom-of-three accessorized with layered gold chain necklaces and slipped into a pair of Prada Monolith combat boots.

These military-inspired boots are characterized by a lace-up construction and chunky rubber lug sole. They are made from smooth leather and have buckled cuff straps and a detachable logo-plaque nylon pouch. 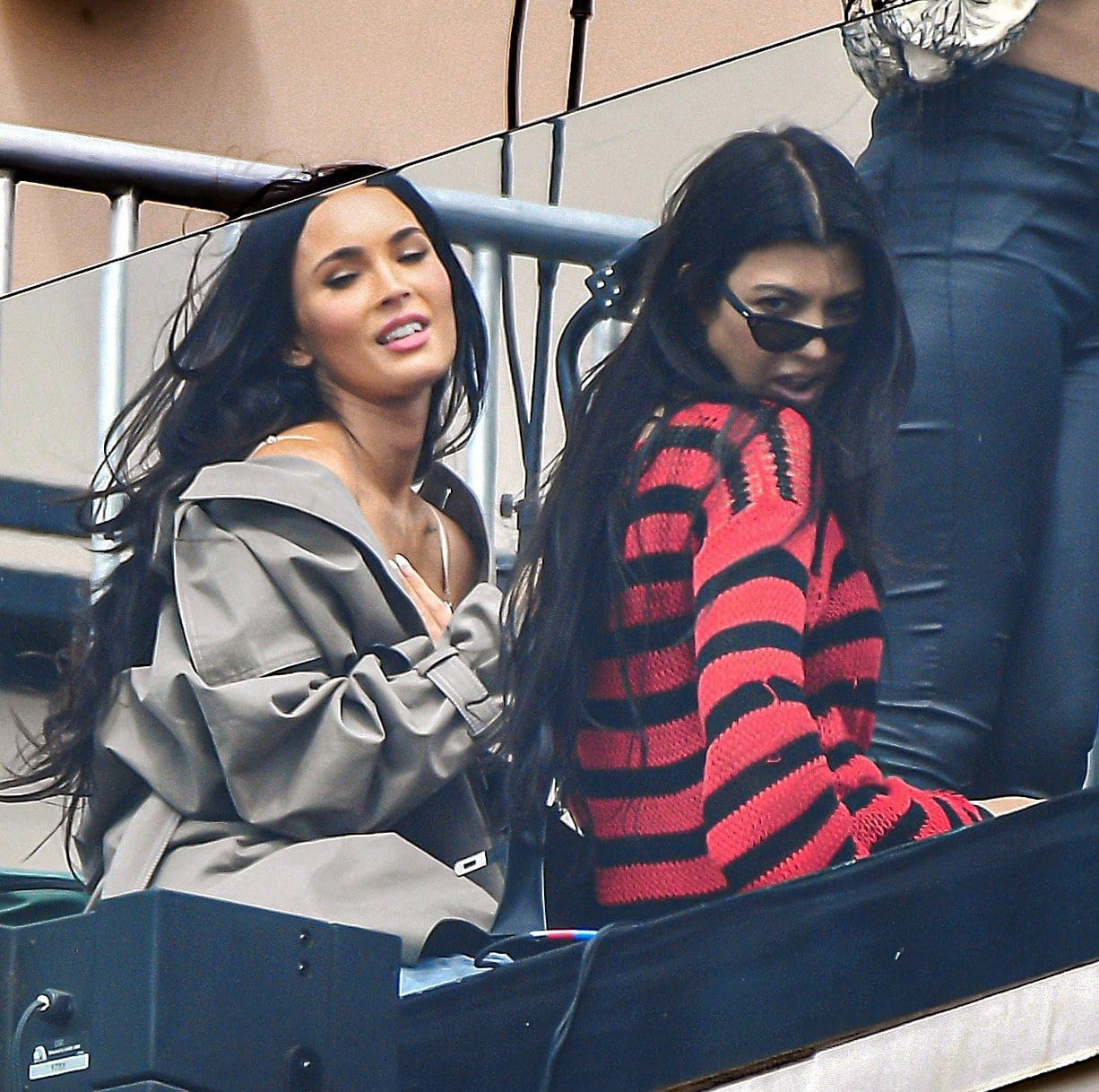 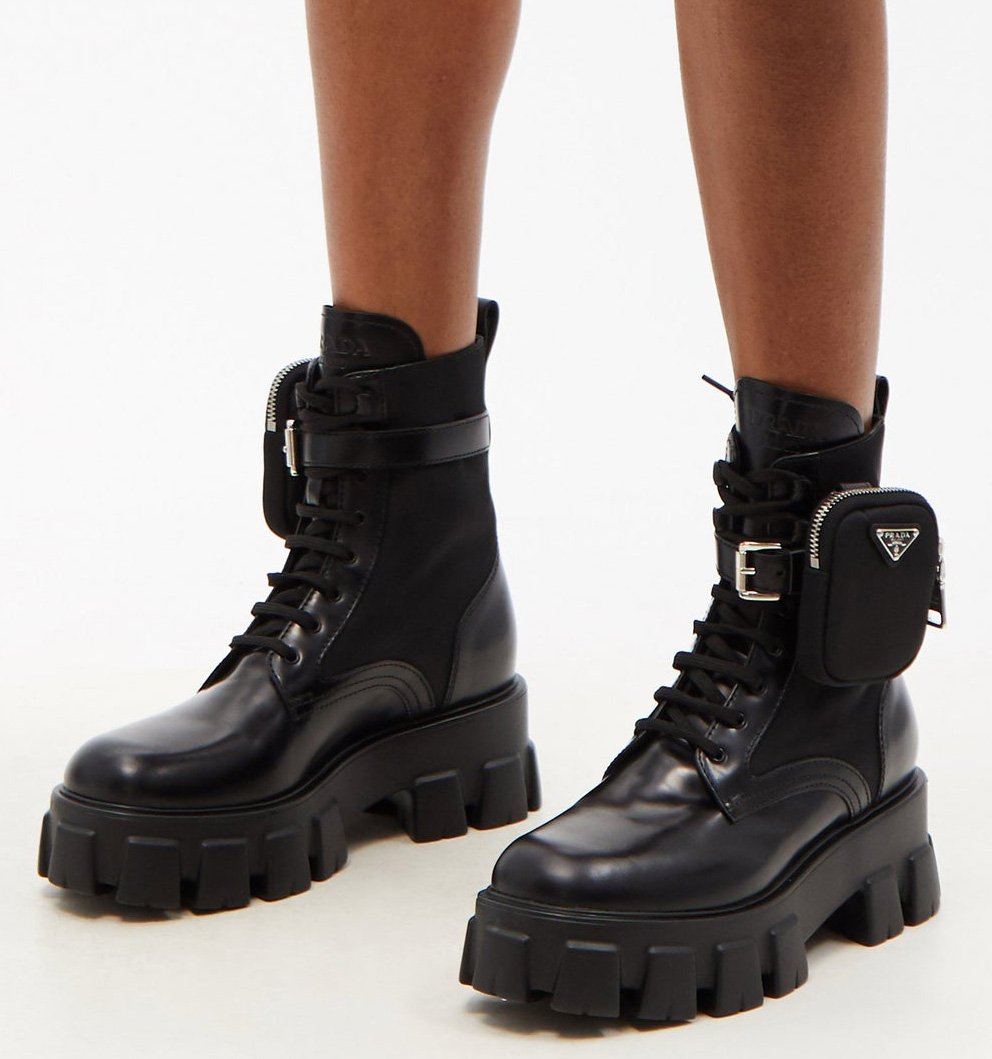 The 20-year-old social media influencer seemed all-set to party in her racy ensemble that included a black Palmer cropped cami top with a sheer netted underbust that showed a glimpse of her underboob.

She paired the revealing top with cargo pants and added a pop of color to the look with purple Converse sneakers. 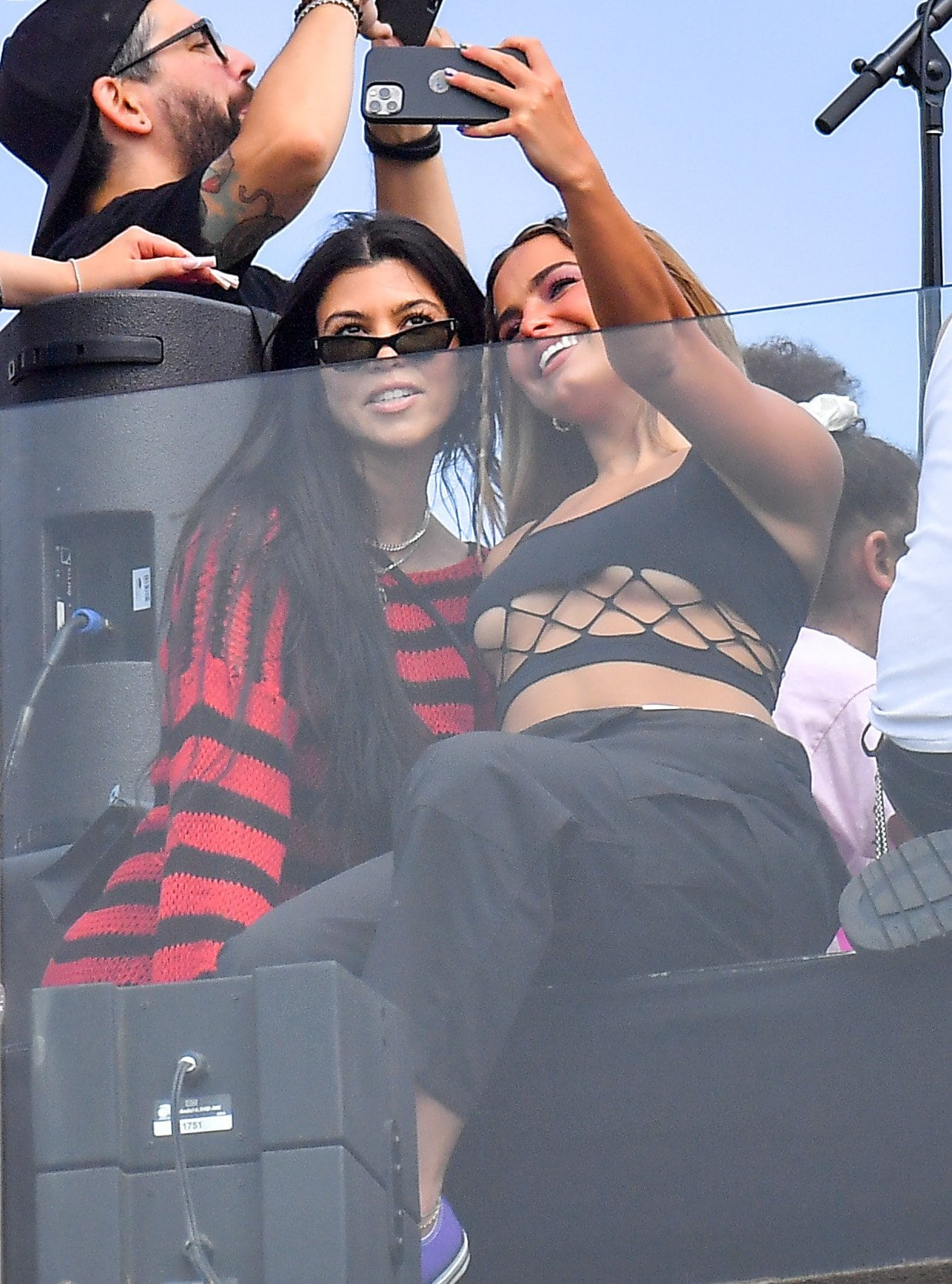