On Weight Loss and the Simple Way She Lost 100 Pounds

Chrissy Metz’ portrayal as Kate Pearson on the hit NBC show This Is Us has garnered plenty of positive reviews from critics and viewers alike. The actress takes hard-hitting storylines in stride, such as dealing with body image, fraught relationships with parents, and weight loss.

One of the main story arcs that Metz’ character deals with is losing weight, and her real-life counterpart has been more than forthcoming about her own weight loss journey. Metz revealed that she identified with Kate’s struggles, which was one of the reasons Metz was so excited to be cast on This Is Us. 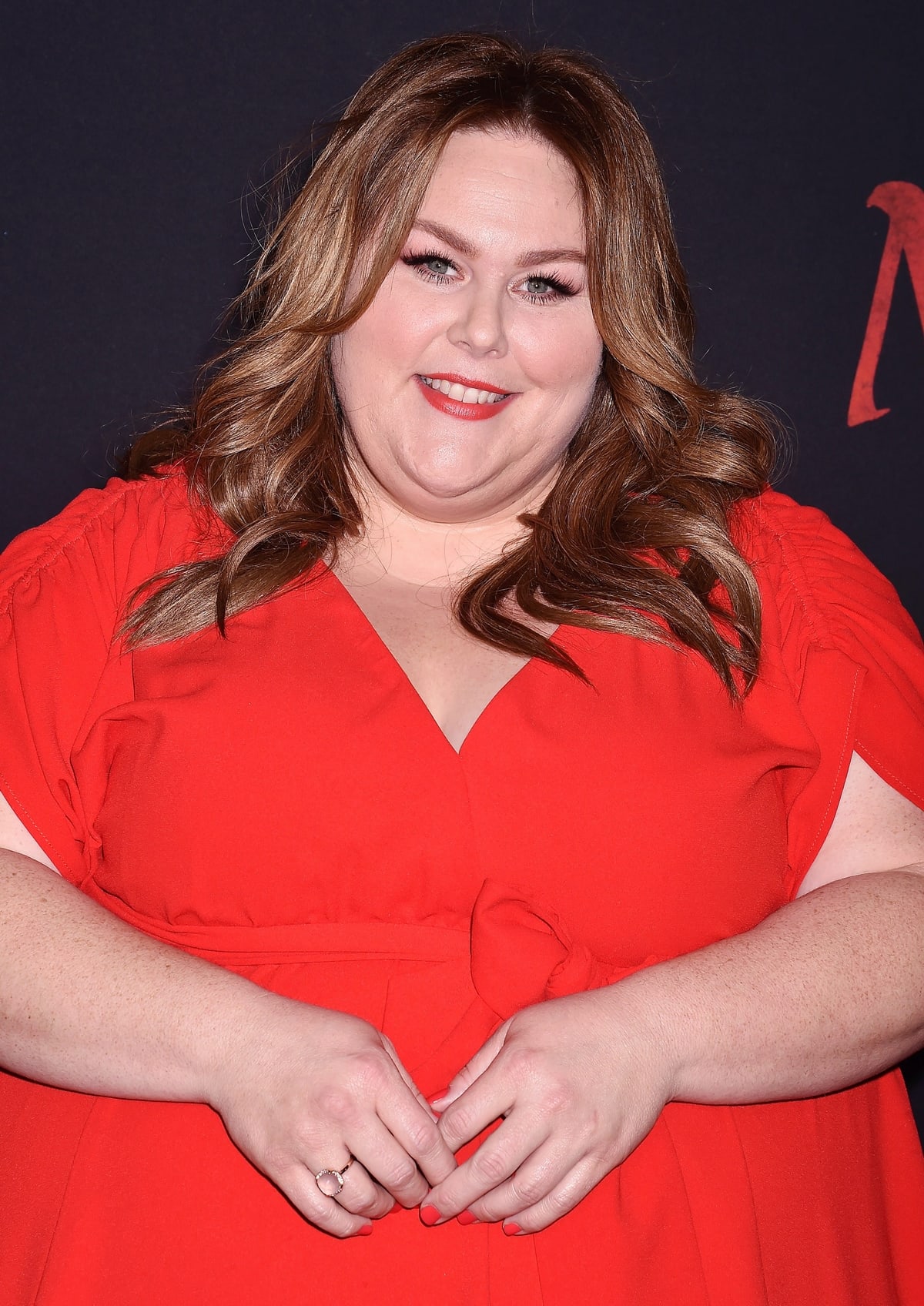 “Here was this woman who was actually dealing with weight. Not like, ‘Oh my God, I gained a pound,’” Metz said in an interview with The Hollywood Reporter, “She was a real woman who was really struggling, and all I could think was, ‘Oh my God, I’m Kate.’”

Just like her on-screen character, the actress is open and honest with fans about her lifelong struggle with her weight and body image. Metz told THR that she has always been self-conscious about her weight, even as a child who was “born chubby”. Just like Kate, Metz says that her parents did not understand how to help their child, leading her to become even more self-conscious.

“I remember going to Weight Watchers when I was like 11,” Metz says. “I was the youngest person in the damned room, and it was awkward. My mom was trying to figure it out, but it’s a process.” 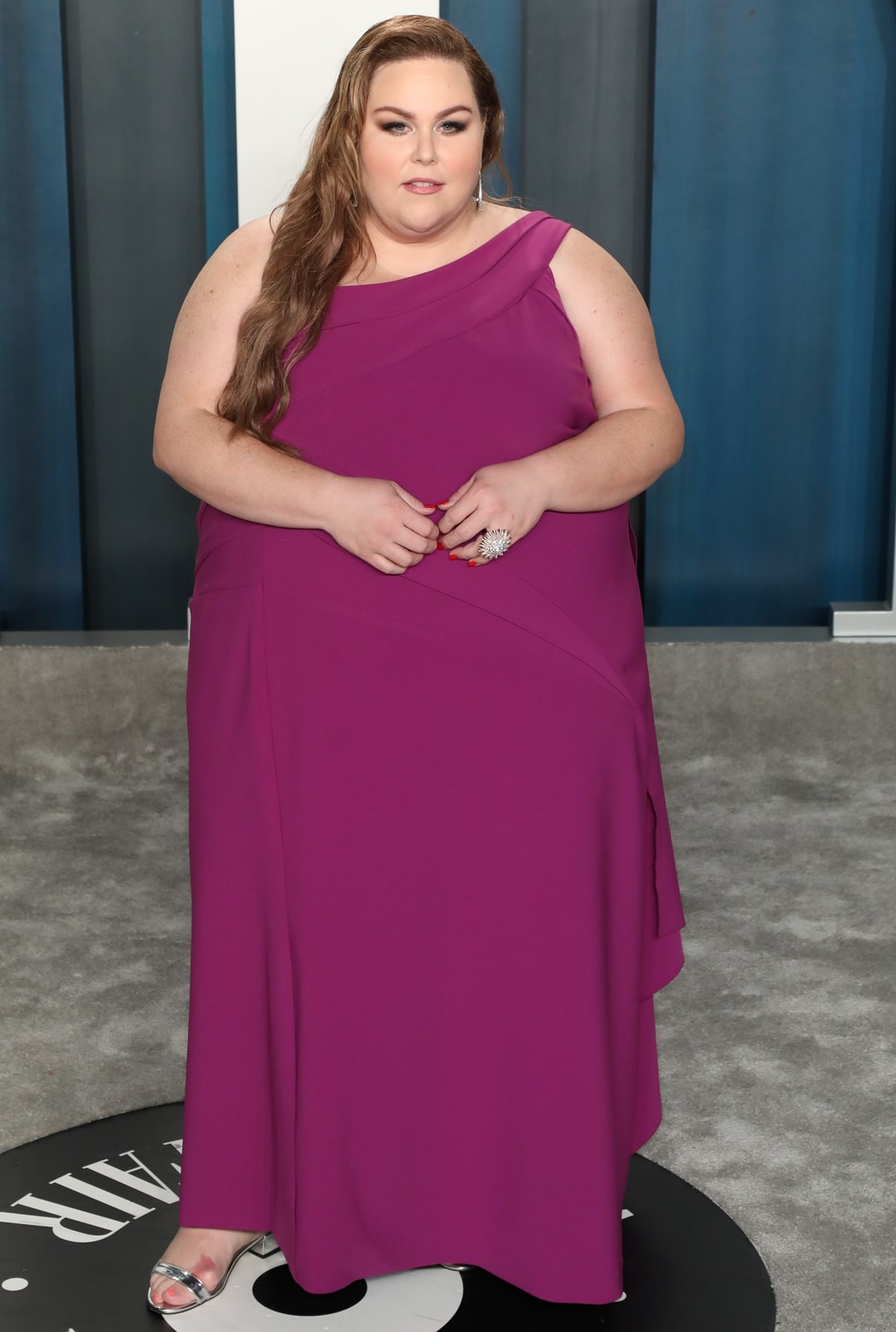 While the actress encourages fans that want to lose weight to go about it in a safe and healthy way, she admits that she has tried crash diets before. Metz began her acting career in 2017, telling People that she was a perfectly normal size 12 at the time.

At the recommendation of her manager, she lost 50 pounds before moving to Los Angeles. Even still, she wasn’t booking any gigs. Metz says that this was a huge hit to her mental health, leading her to binge eat by “eating her feelings”, resulting in gaining 100 pounds.

Metz shocked fans in an interview with TVLine, revealing that her This Is Us contract stipulates that she must lose weight as her character does, to reflect the storyline. “That was a win-win for me,” Metz said. “Because it’s one thing to try to do it on your own. But as human beings, it’s an ego thing: we’re more likely to do something for someone else.”

This clause in her contract was an outrage for some fans, who were adamant that the actress should not have to do this. Still, Metz says that it is her choice to lose weight and that she loves herself all the same. 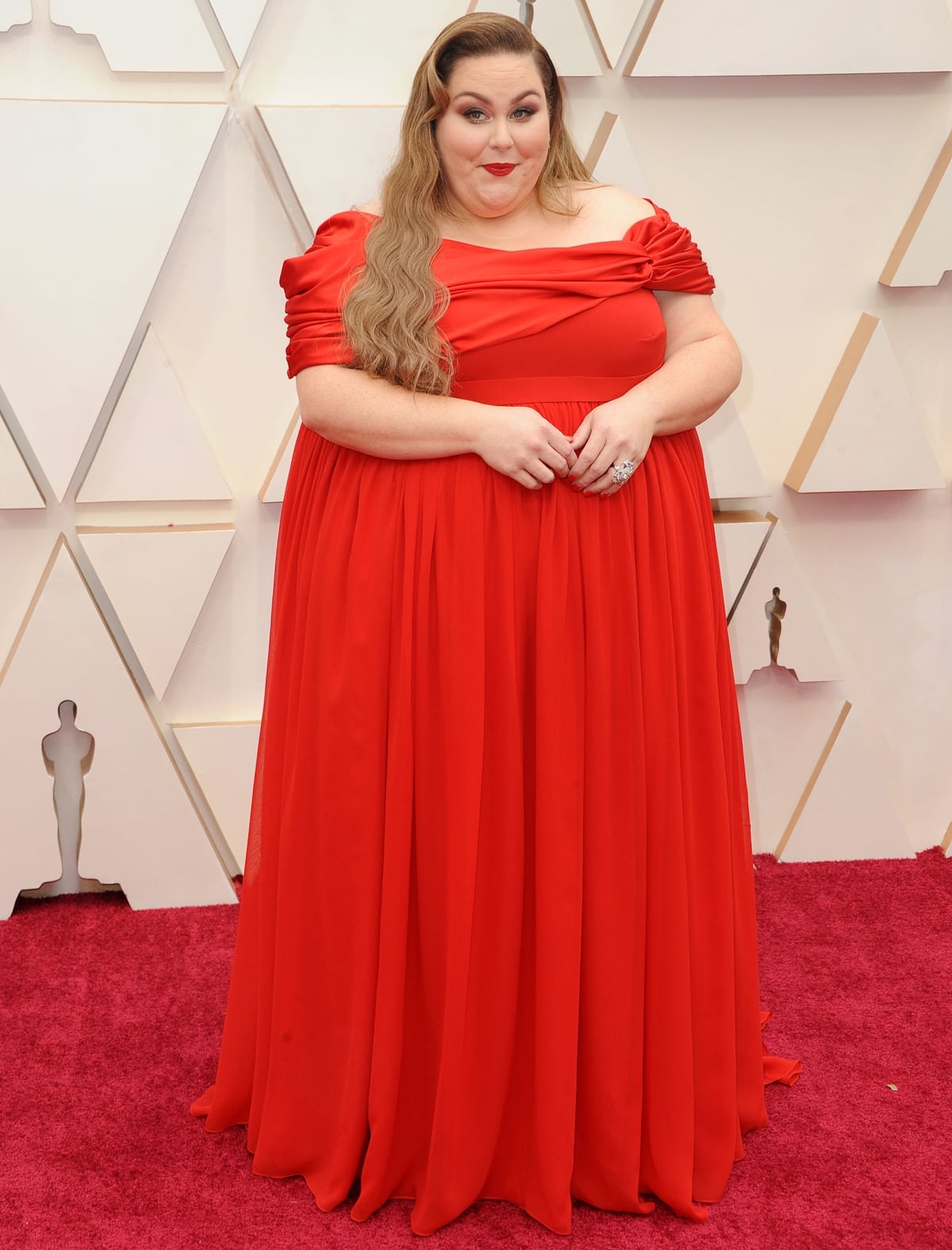 Chrissy Metz in a red off-the-shoulder dress by Christian Siriano at the 92nd Annual Academy Awards at Hollywood and Highland on February 9, 2020, in Hollywood, California (Credit: WENN / Avalon)

In 2017, Metz told People that even though she loves her body, she is still working to be healthier, asserting that her weight loss is for her own benefit—not for anyone else. She says, “I want to have a fit, healthy body and not have to be put in a box. I don’t want to be limited by anything.”

Recently, the actress has been showing off a significant weight loss, appearing happy, healthy, and confident in front of the press. Of course, this led fans to wonder, “How did she do it?”

In the first season of This Is Us, Metz’s on-screen counterpart, Kate, plays with the idea of getting gastric bypass surgery. Metz says that she did not—and doesn’t plan to—have surgery to lose weight.

The actress told Today, “The question I wish people would stop asking me is, ‘Are you having weight-loss surgery? Are you gonna be doing a gastric bypass?’ . . . I’m good, boo.” 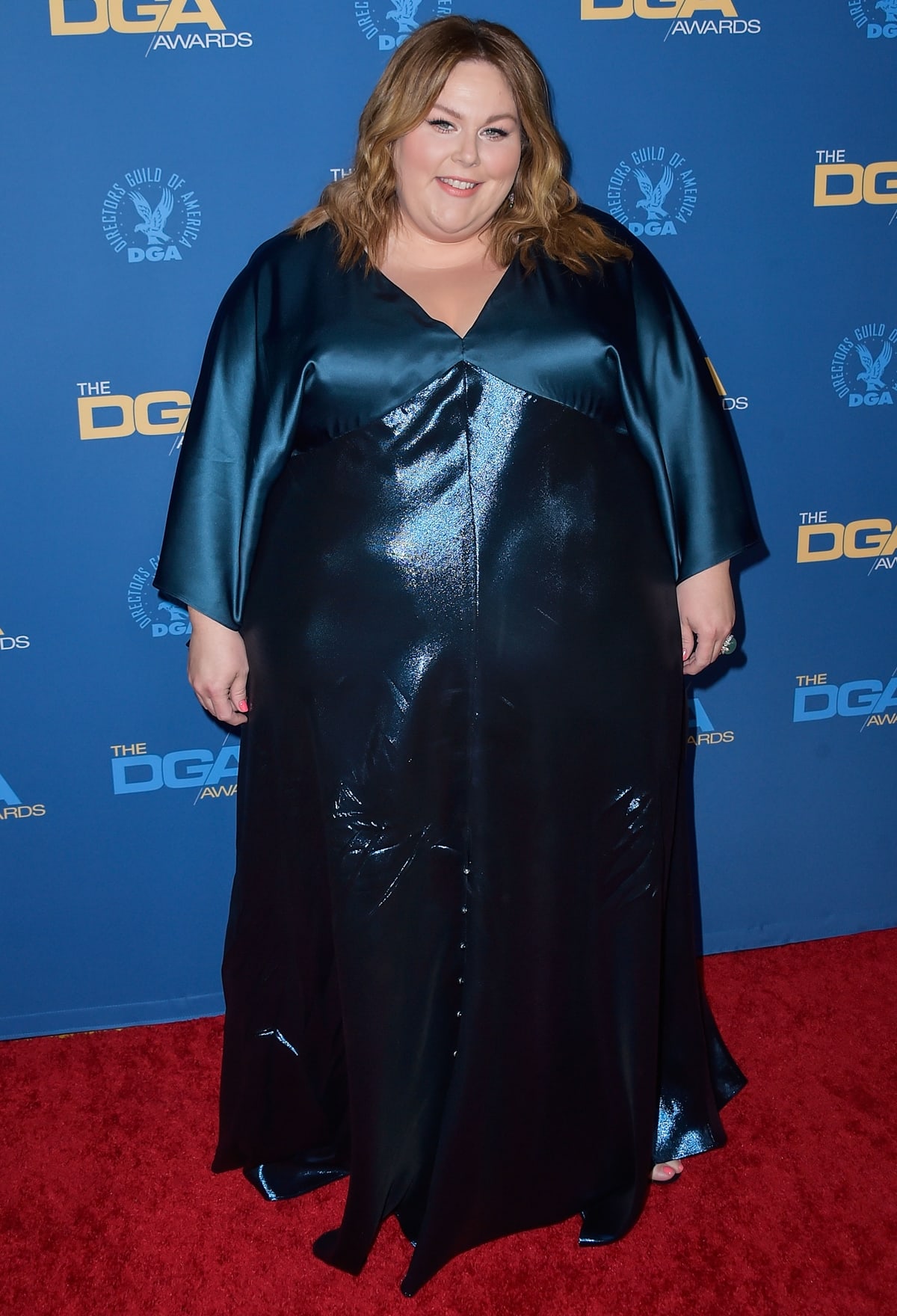 Metz admitted that the catalyst for her weight loss journey happened in 2010. She awoke in the middle of the night, having severe heart palpitations. Of the incident, she said, “I’m like, What is this? Am I dying? What’s happening? It was really scary — really, really, really scary.”

The actress went to the hospital, where the doctors concluded that what she was experiencing was a panic attack, but that her weight likely played a role, telling Metz, “You can’t continue on this path.”

After that, Metz was determined to make a change. “I was so gung ho, I lost 100 lbs. in less than five months,” she said in an interview with People. Although she lost a significant amount of weight, Metz says that she learned from her past mistakes and didn’t turn to crash dieting or depriving herself of calories. In fact, her weight loss method was as simple as a few lifestyle changes. 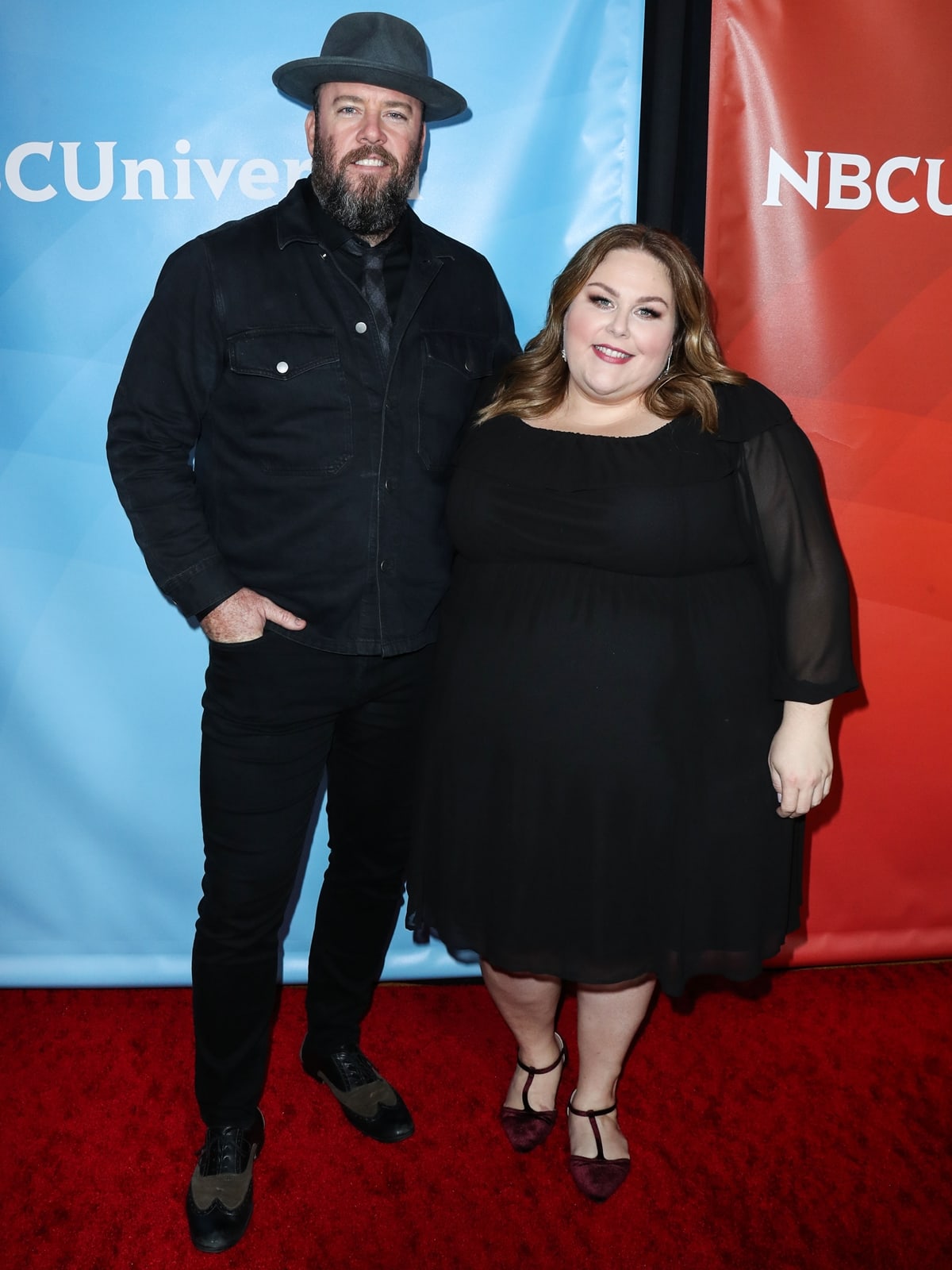 In addition to making an effort to improve her physical health, Metz said that she had to prioritize her mental health, too. She admitted to People that she often found herself reading or focusing on spirituality to stay strong and stick to her healthy lifestyle.

Metz said that a breakthrough for her was understanding that she was worthy and “good enough”, no matter what she looked like. “I realized that … at the core of who we are, we’re these perfect beings,” Metz remarked. “And we’re not taught that.”

Metz went on to say that even though she has lost quite a few pounds and is still continuing on her weight loss journey, she believes there is nothing wrong with your size. In fact, she thinks you look great! 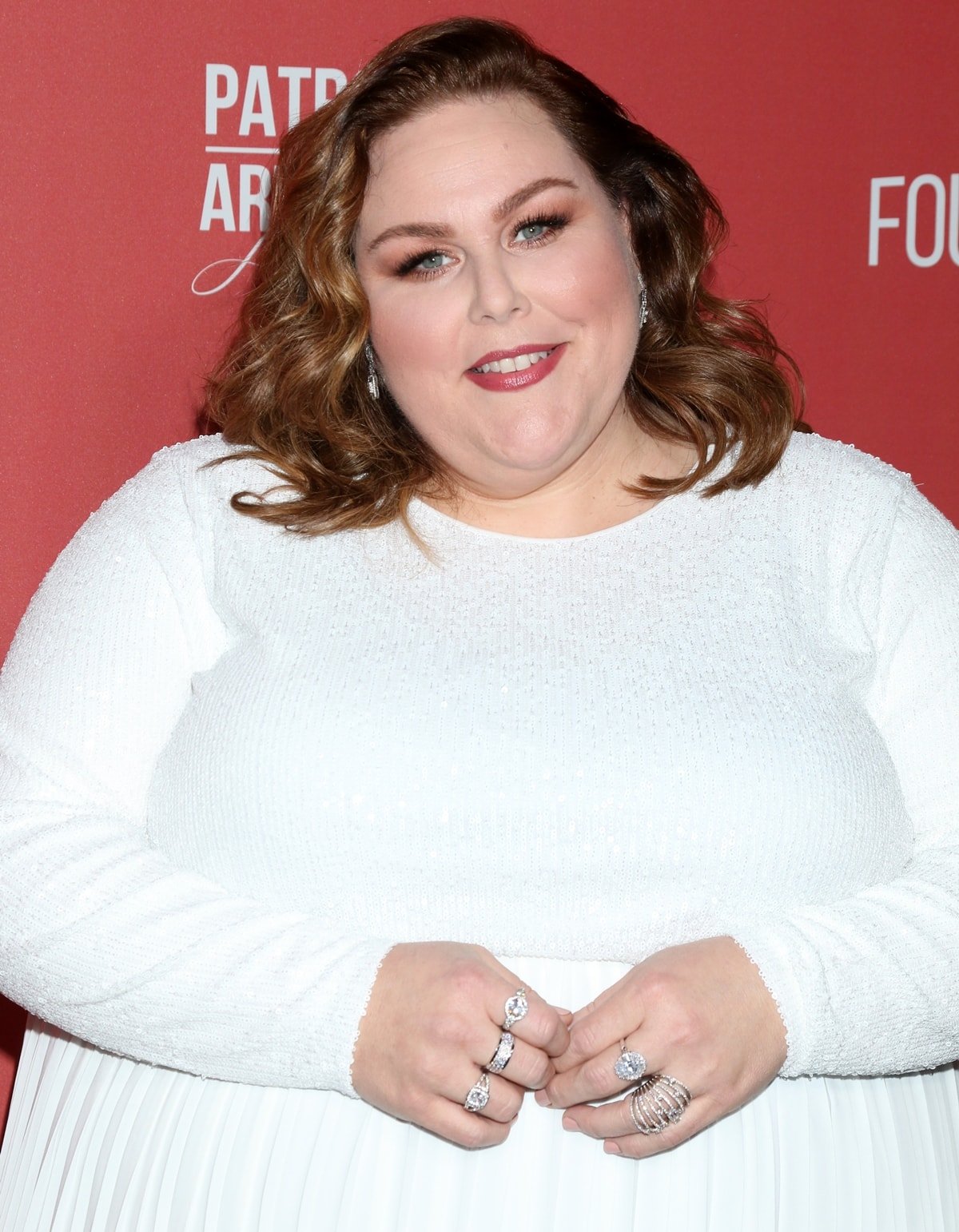 “I just have to be very clear,” Metz continued, “Whether or not I lose weight or stay the same, it’s purely a choice of mine for health. Not because I think that plus size, curvy, voluptuous, big bodies aren’t attractive—because I think they’re awesome and sexy.”

Mandy Moore, Chrissy Metz’s This Is Us co-star, may have gotten her career start as a ’90s teenybopper, but she’s actually gone on to create an impressive portfolio of work. 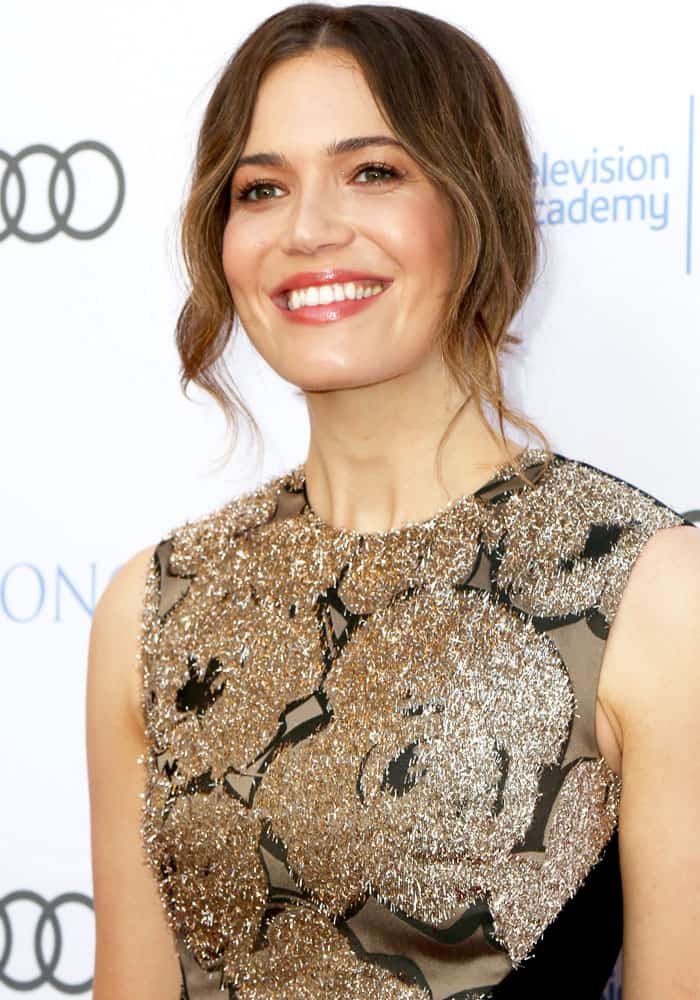 After the actress left quite an impression with “The Princess Diaries,” Mandy went on to create an A-list body of work including “A Walk to Remember” and Disney’s “Tangled.”

Mandy later jumped to the small screen with the drama television series “This Is Us” that premiered on NBC on September 20, 2016. 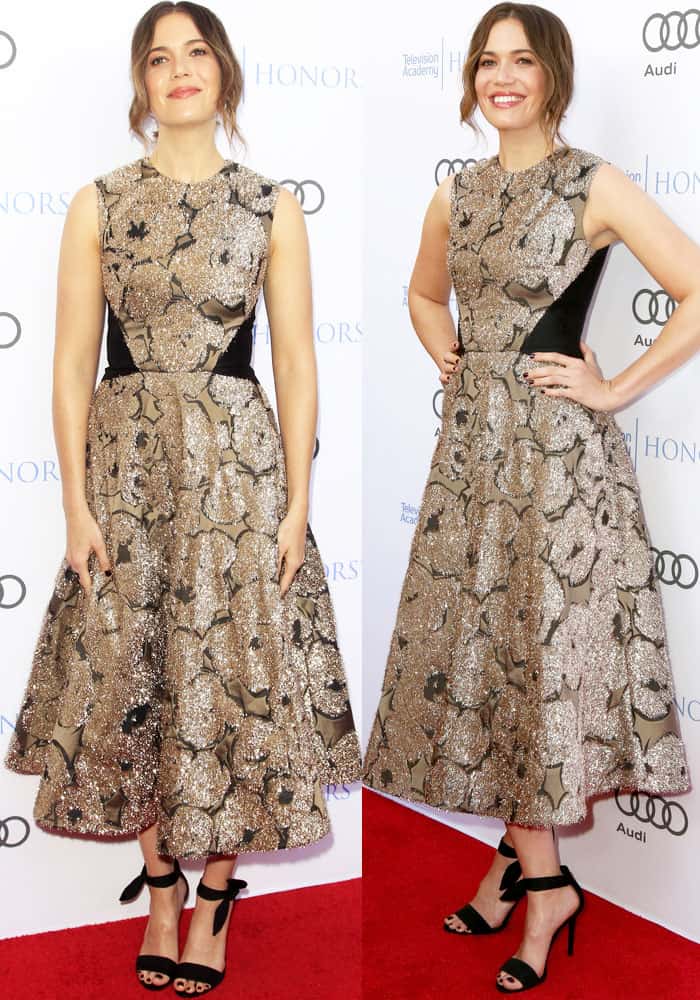 The actress has received plenty of recognition for her role as Rebecca Pearson (née Malone), the wife of Miguel Rivas (Milo Ventimiglia). 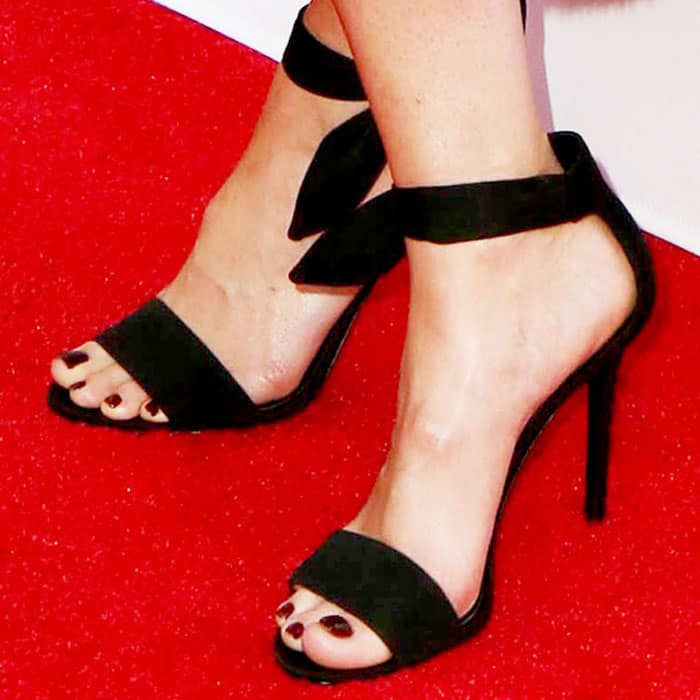 In June 2017, Mandy was spotted at the 10th Television Academy Honors held at the Montage Hotel in Beverly Hills, celebrating her work on the show. 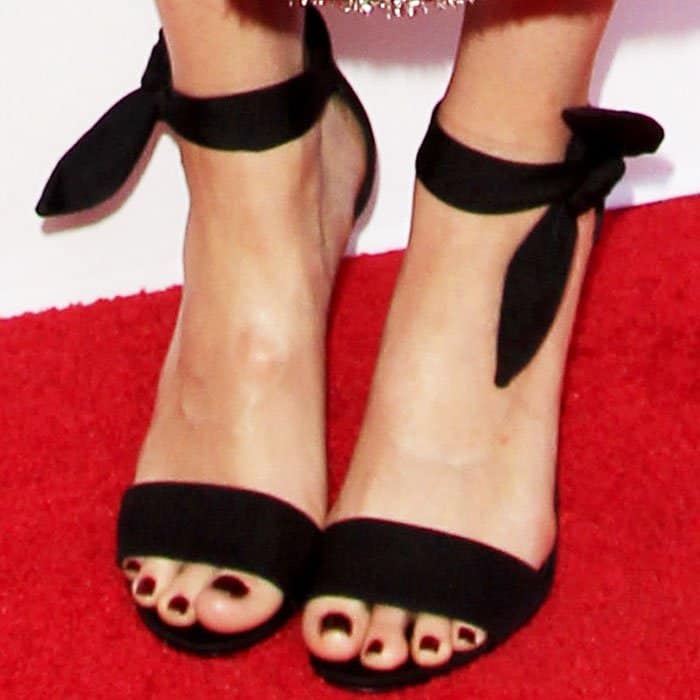 Mandy continued her gorgeous red carpet style streak in a glitter fabric dress by Lela Rose. The geometric black side panels made for an interesting contrast to the all-over gold glitter pattern of the dress. 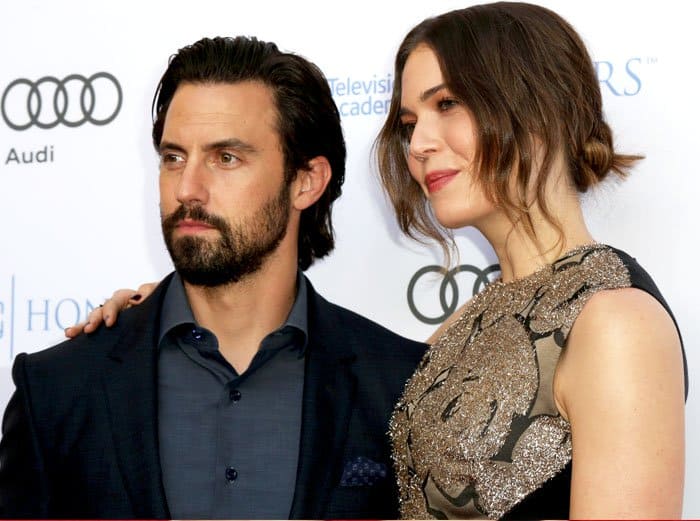 The actress echoed the stark contrast with the Stella Luna “Gabardine” sandals in black suede and finished her look with jewelry from Fernando Jorge. 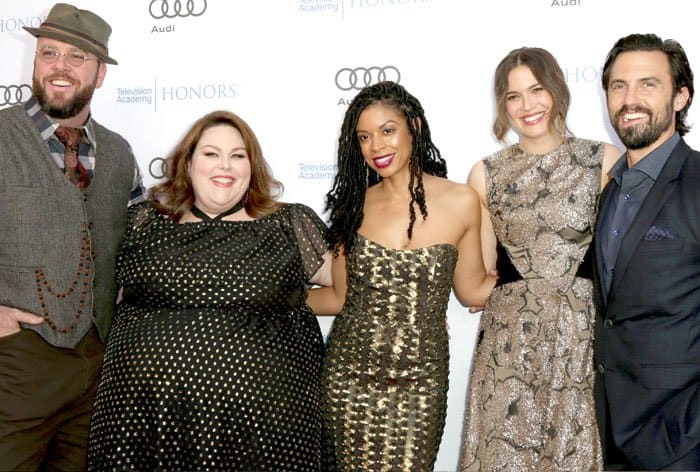 Mandy has always gushed over how great the cast of “This Is Us” gets along behind the scenes, so we weren’t surprised to see the actress genuinely happy to pose with her co-stars Chris Sullivan, Chrissy Metz, Susan Kelechi Watson, and Milo Ventimiglia at the event.

The actress uploaded photos from the night to her Instagram, captioning one photo, “On the town with the family for the #televisionacademyhonors, where #thisisus was recognized (along with some of my favorite shows) as programming that “creates awareness, enlightens, educates and positively motivates audiences.”

You can shop a pair of shoes similar to Mandy’s at Saks Fifth Avenue. 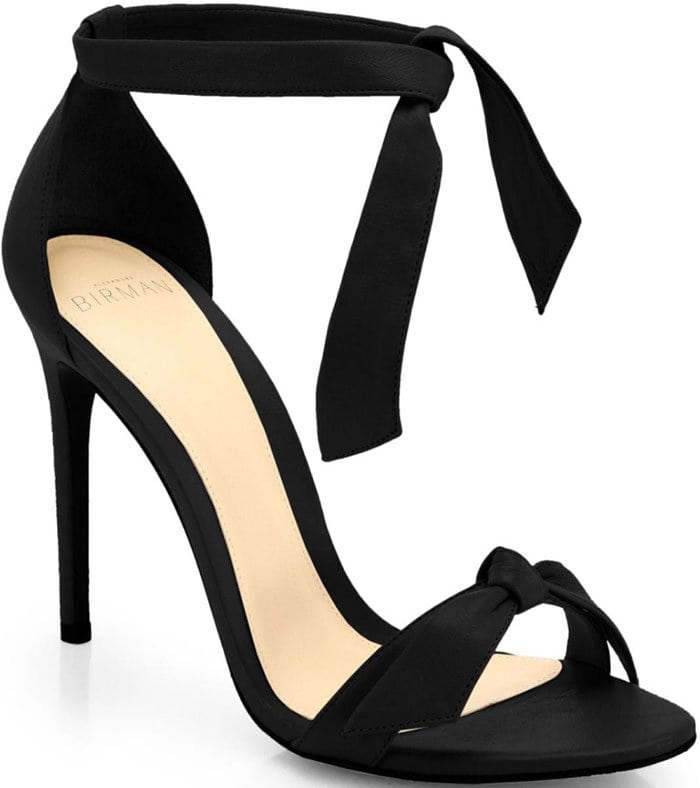 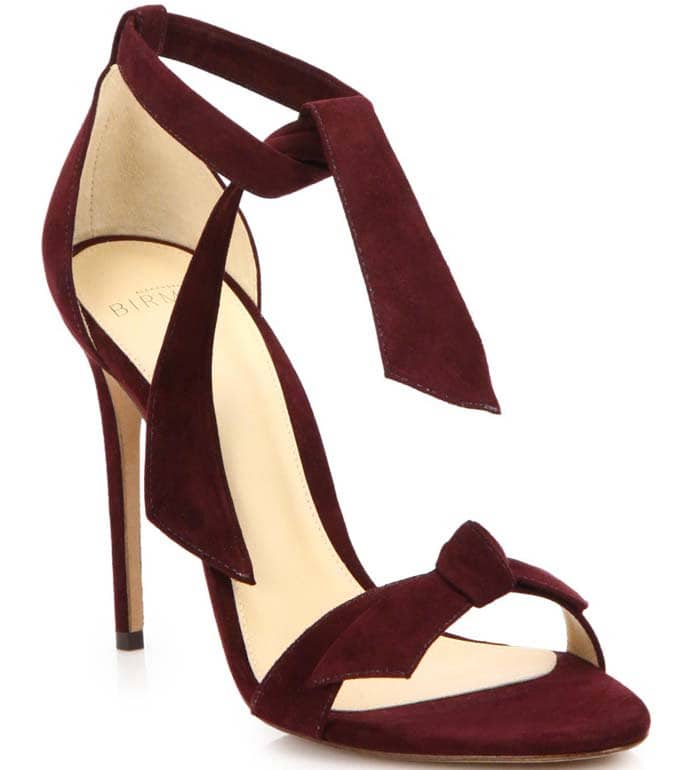 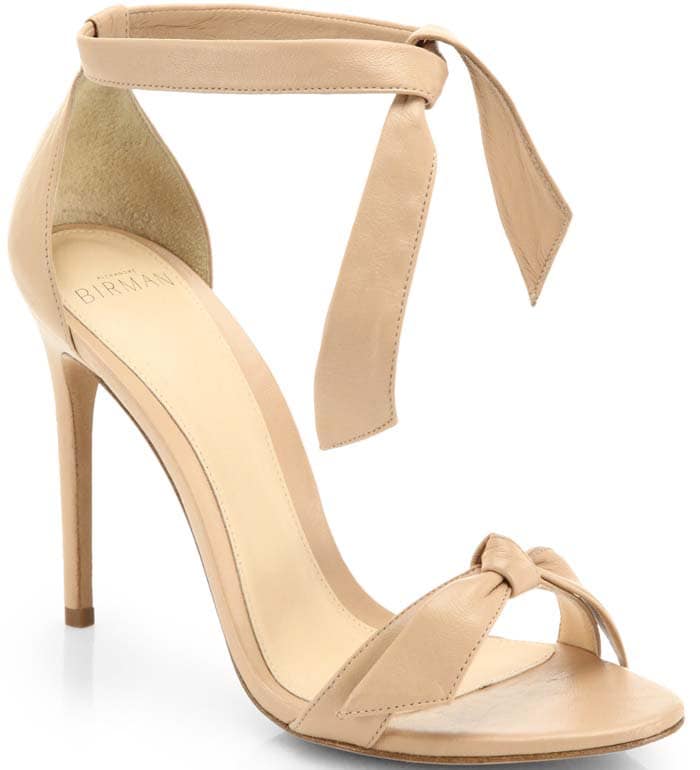 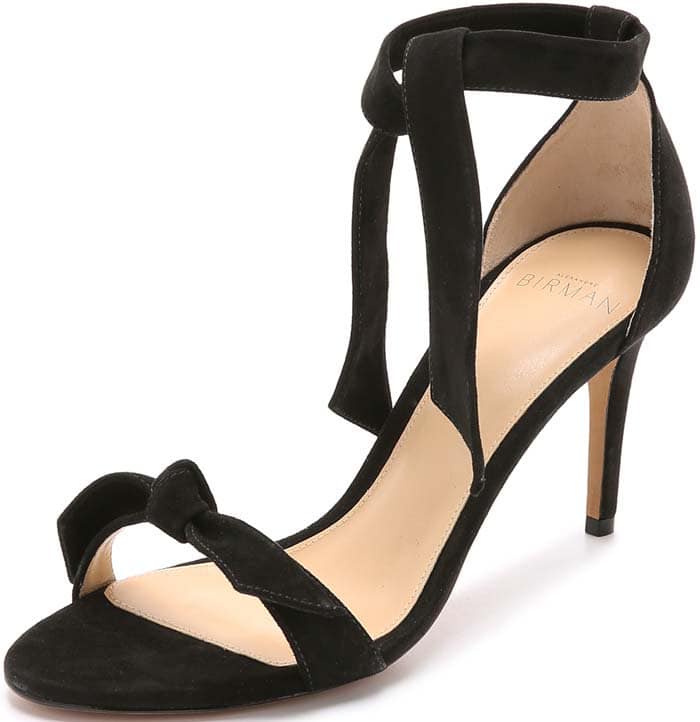 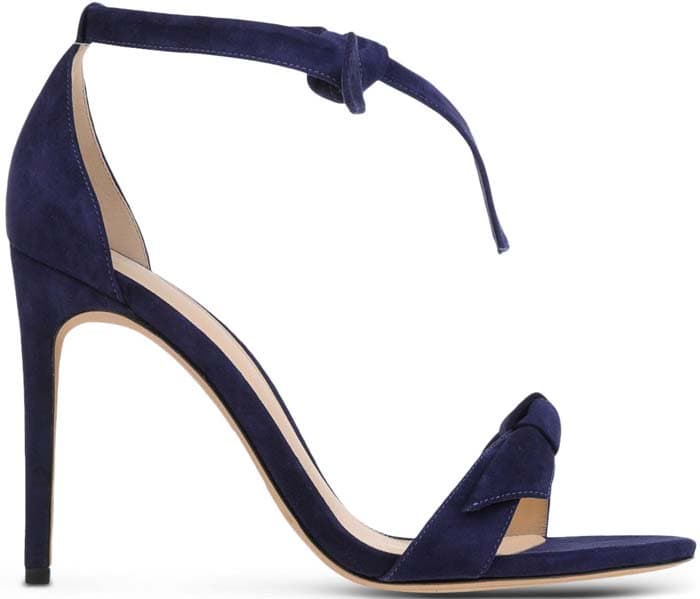 Why the Fashion Set Loves the Gap Home Collection at Walmart