One of the most celebrated films of 2011 was “The Help,” based on the 2009 novel of the same name by Kathryn Stockett that you can buy on Amazon.

Based on a true story, “The Help” is set in 1962 Mississippi and follows the story of an aspiring writer who decides to write the story of the black women who work for the families of the white women in town. 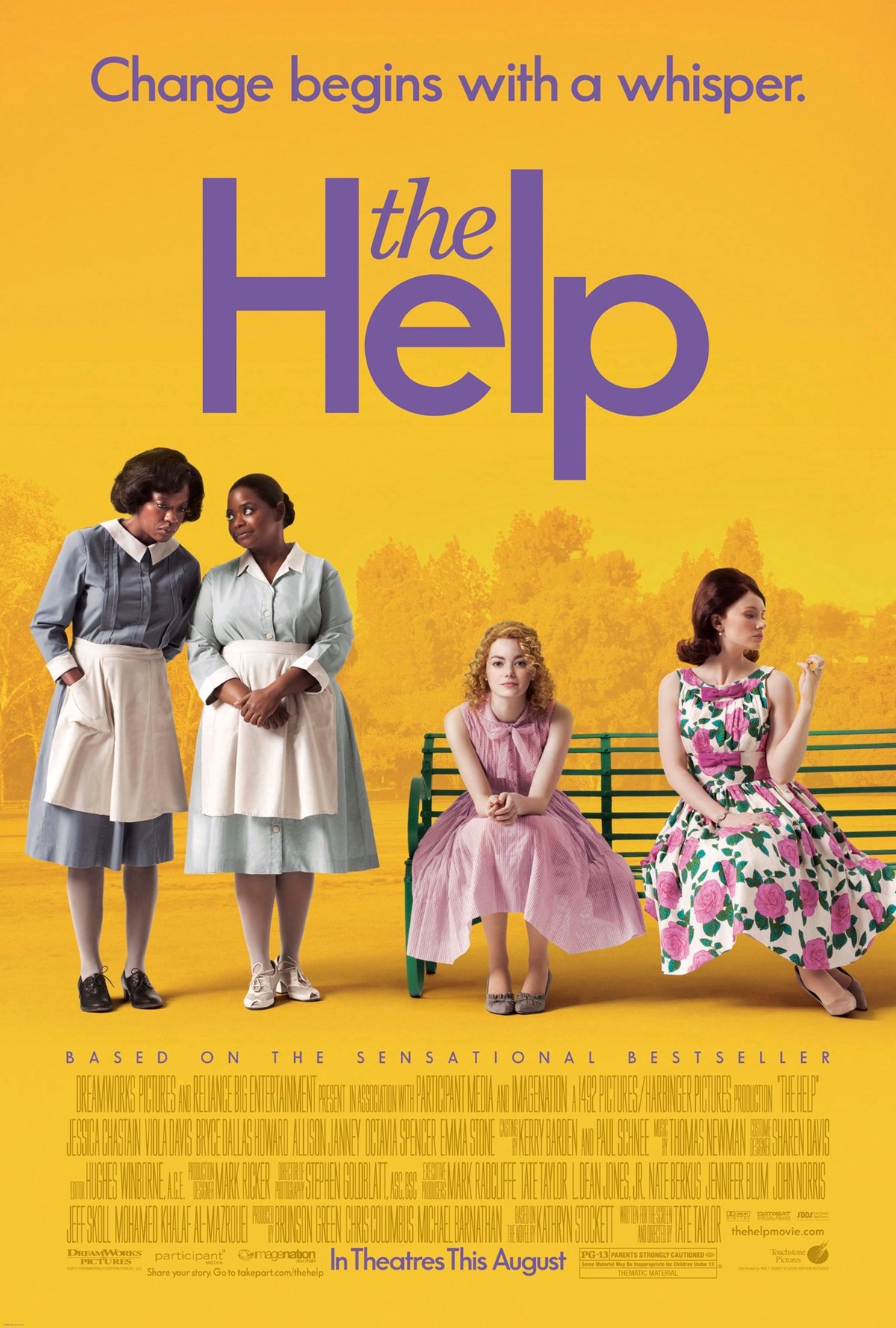 Although an unpopular move, the writer forms a friendship with these women as she listens to their stories. 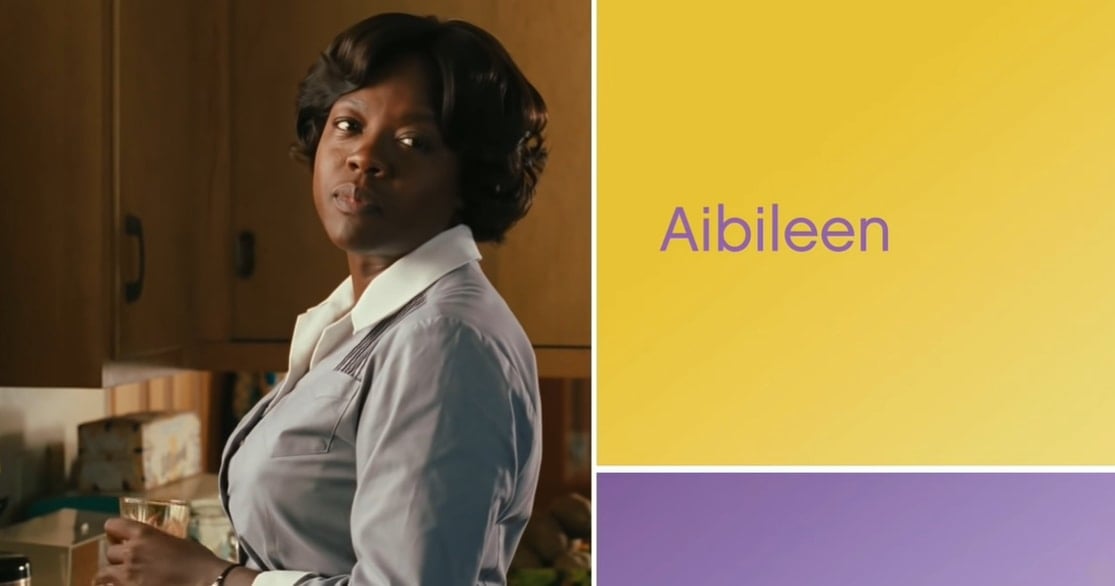 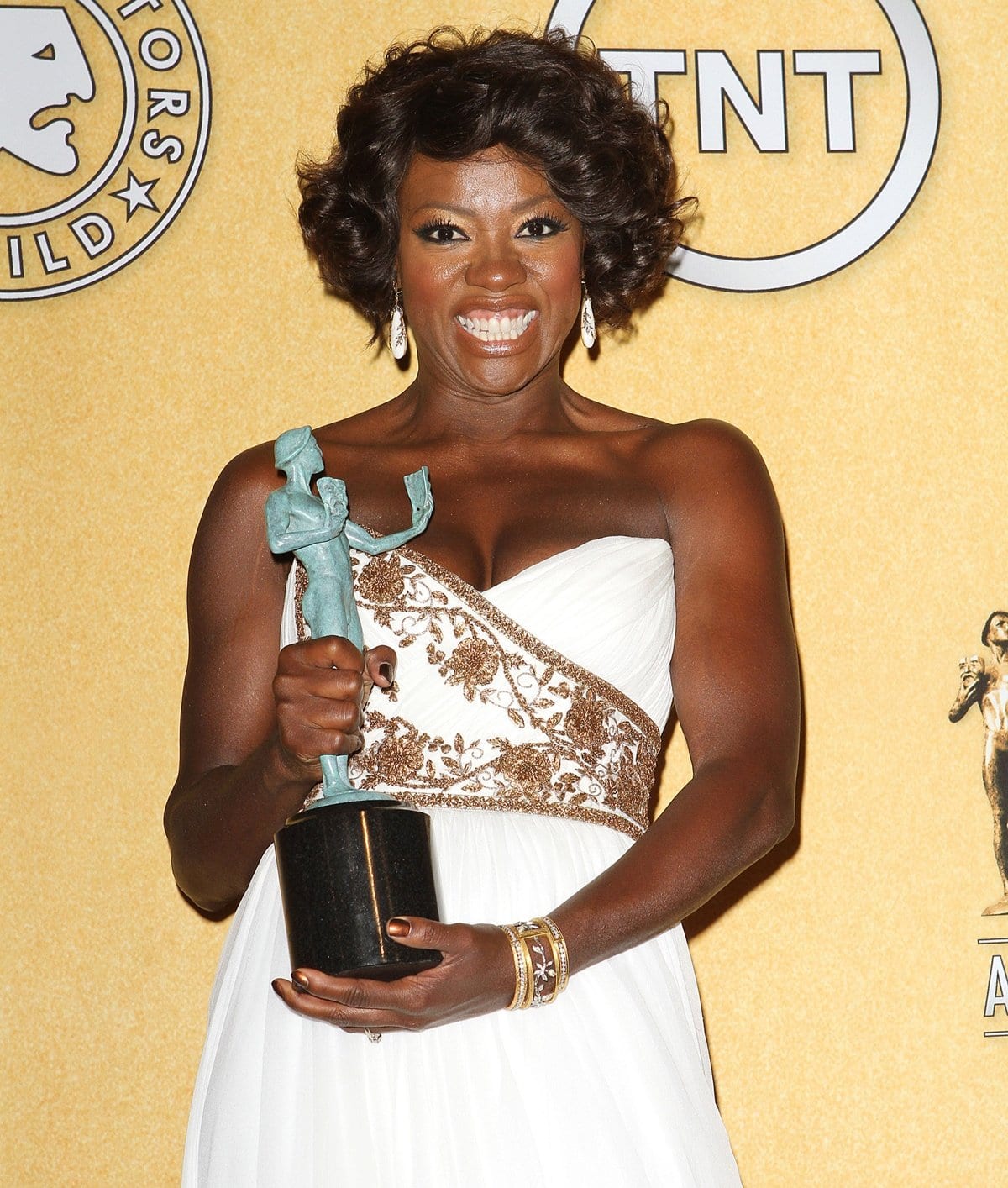 Viola Davis won the best actress award and was part of the winning best cast for her role in The Help at the 18th Annual Screen Actors Guild Awards held on January 29, 2012, at the Shrine Exposition Center in Los Angeles, California (Credit: FayesVision / WENN)

However, despite its commercial success, the film has largely fallen out of favor with its own stars since 2011.

Two of the film’s most well-known stars – Bryce Dallas Howard and Viola Davis – have publicly criticized the film since its release. Here is a closer look at how the film affected some of its stars.

How much weight did Jessica Chastain gain for The Help?

“The Help” was one of six 2011 films that Jessica Chastain acted in. Leading up to her role as Celia Foote, Chastain had roles in Jeff Nichols’ “Take Shelter,” Ralph Fiennes’ “Coriolanus,” Terrence Malick’s “The Tree of Life,” “Wilde Salomé,” and “Texas Killing Fields.”

However, it was her role in “The Help” that garnered her the most recognition. Chastain received Best Supporting Actress nominations from the Academy Awards, BAFTA, Golden Globe, and the Screen Actors Guild. She ultimately lost in each case to her co-star, Octavia Spencer. 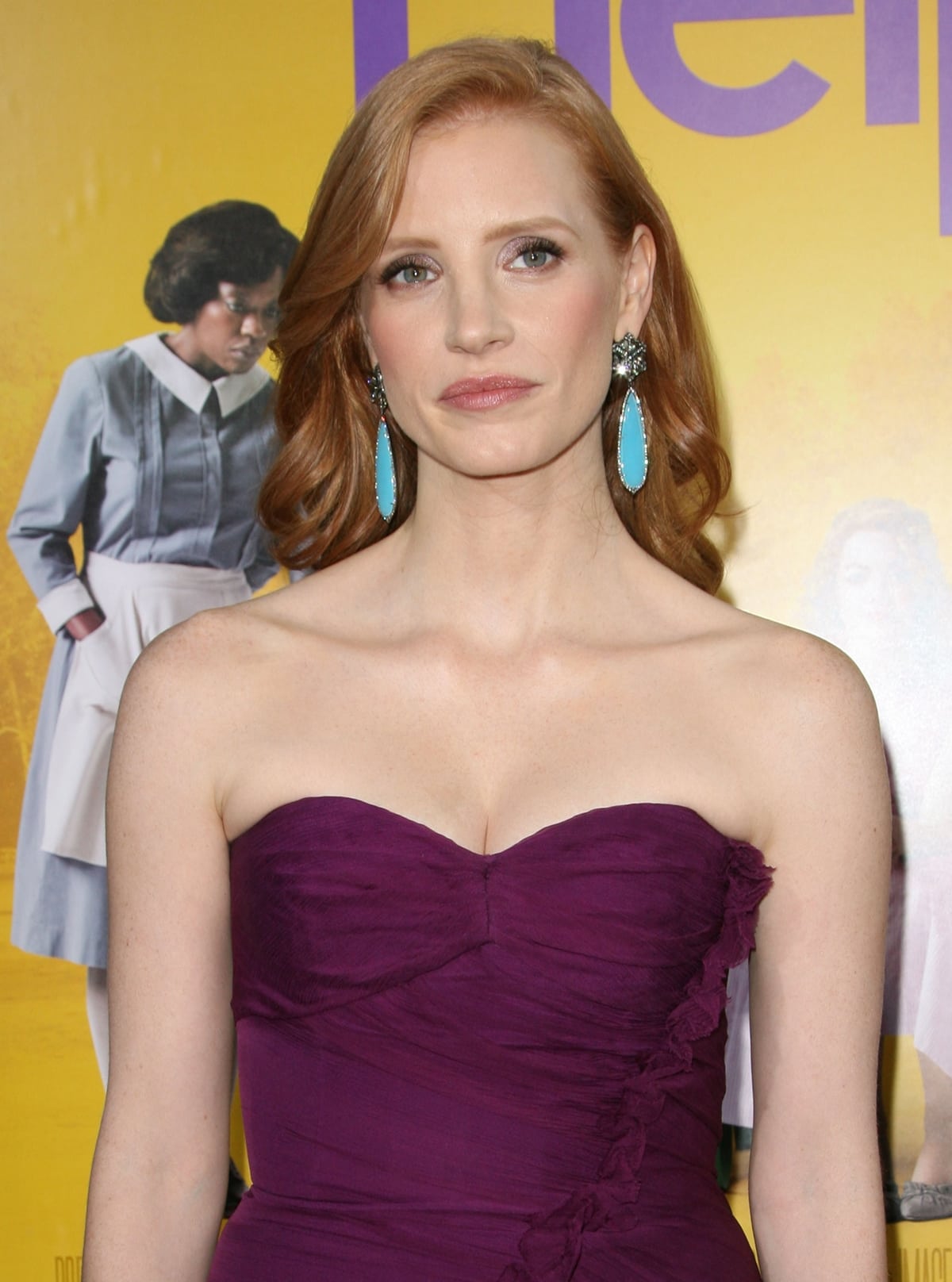 Chastain had to gain 15 pounds for her role as Celia Foote, a buxom woman who is new to the neighborhood and befriends her maid (played by Spencer).

She has said that the process of gaining weight was extremely difficult for her, as she is very focused on her health and follows a vegan diet.

Chastain told E! News, “Soy helps you become curvy because it has estrogen in it. So what I would do – and this is really gross – is buy cartons of soy ice cream, microwave it and drink it. It was disgusting.”

Why Bryce Dallas Howard wouldn’t have made The Help today

In “The Help,” they appeared as co-stars, although Chastain’s platinum blonde locks in the film helped differentiate the two.

Bryce Dallas Howard was well-known before her role in “The Help.” She appeared in films including M. Night Shyamalan’s “The Village” (2004) as well as “Lady in the Water” (2006). 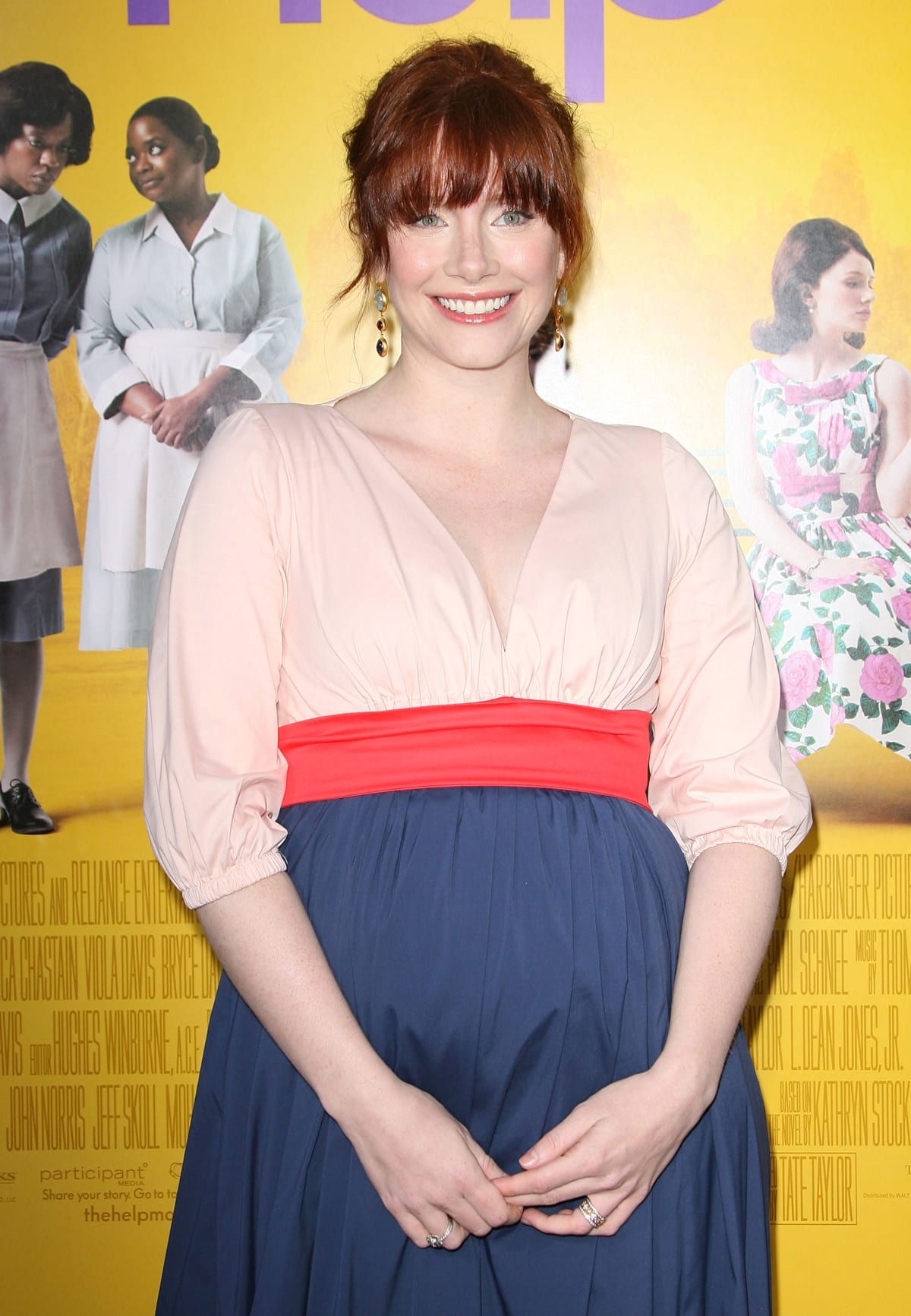 She followed these successes with a role as Gwen Stacy in 2007’s “Spider-Man 3”, as well as “Terminator: Salvation.” By the time she made 2011’s “The Help,” she was well-known with a string of successes behind her name.

However, in 2020, she made a public statement saying that she regretted her role as Hilly Holbrook in “The Help.”

In the summer of 2020, Netflix released “The Help” onto their selection of films. Although many people watched the film on Netflix at that time, the timing coincided with the global news of George Floyd’s death in May of 2020. 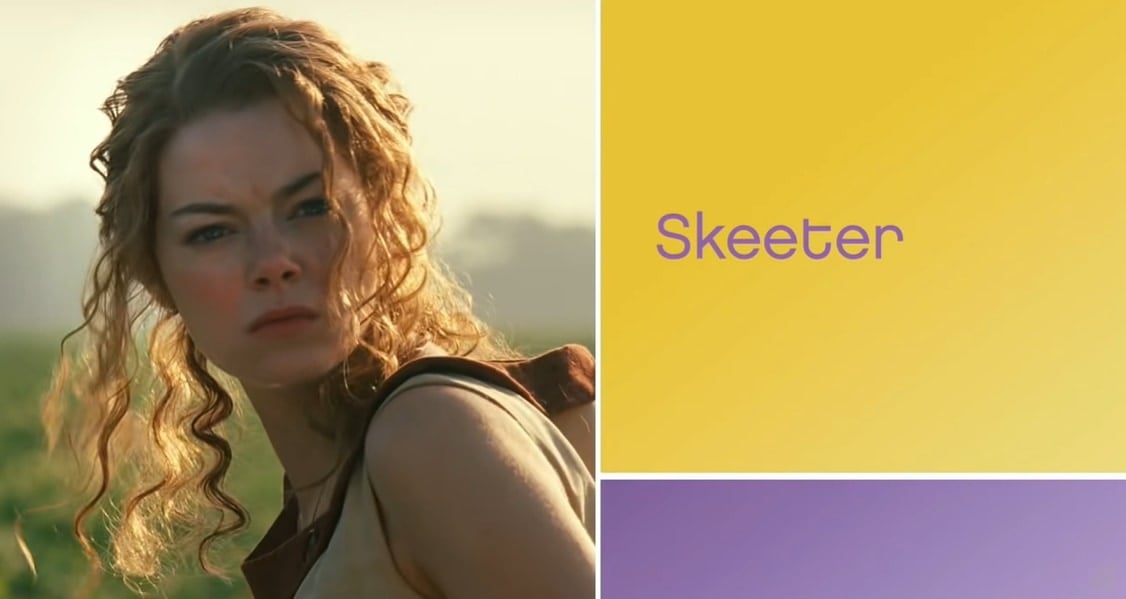 Emma Stone portrayed the aspiring journalist and author Eugenia “Skeeter” Phelan in The Help and was 22 years old when the movie was released in North America on August 10, 2011 (Credit: DreamWorks Pictures)

The international conversation on racism left no corner unturned, including films like “The Help.” In June of 2020, Vanity Fair reported on a Facebook post from Howard about her part in the film:

“The Help is a fictional story told through the perspective of a white character and was created by predominantly white storytellers,” Howard said. “We can all go further.⁣”

Howard, who took care to note that she was “so grateful” for the friendships she formed while making that film, also went so far as to make a watch list of better options, naming films like 13th, I Am Not Your Negro, and Just Mercy. She also suggested miniseries like Watchmen and When They See Us. 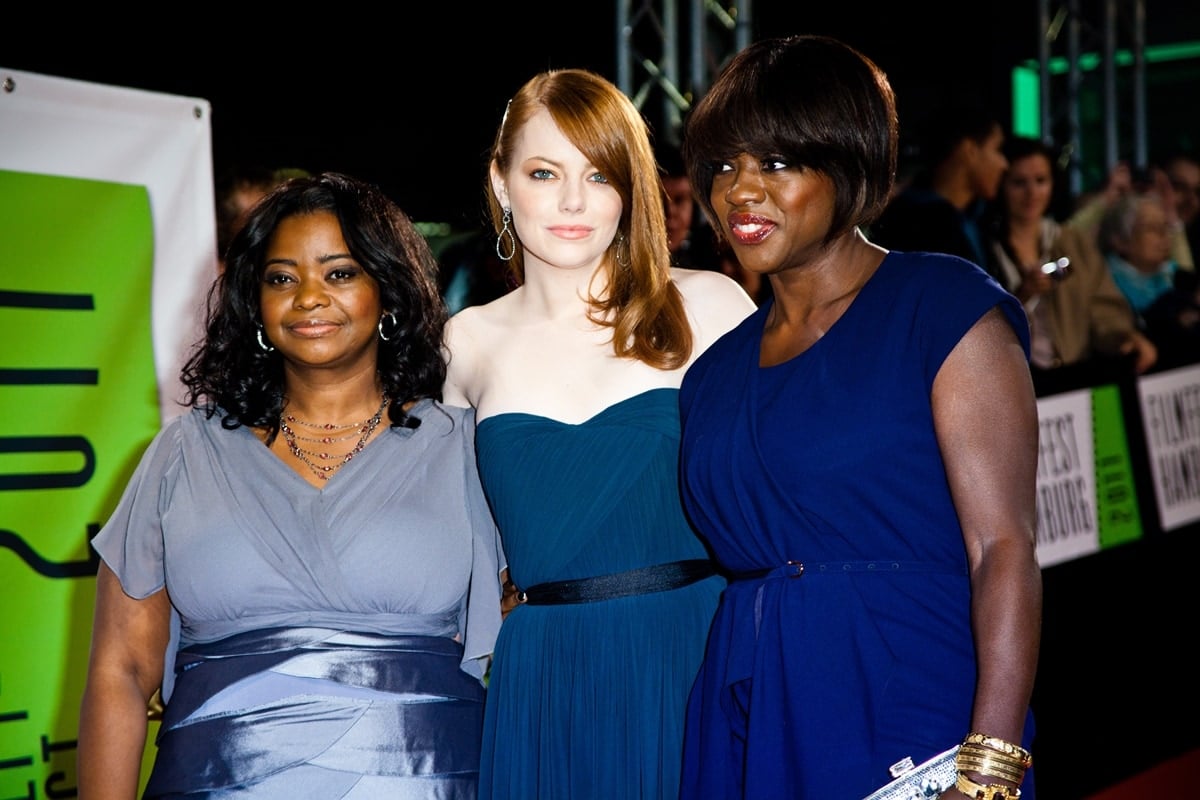 “Stories are a gateway to radical empathy and the greatest ones are catalysts for action,” Howard wrote.

“If you are seeking ways to learn about the Civil Rights Movement, lynchings, segregation, Jim Crow, and all the ways in which those have an impact on us today, here are a handful of powerful, essential, masterful films and shows that center Black lives, stories, creators, and/or performers.”

Viola Davis, who acted in the role of Aibileen Clark, is one of the most celebrated actors who were part of “The Help.”

Since starring in the film, she has won an Academy Award, a Primetime Emmy Award, and two Tony Awards, becoming the youngest actor and first African-American to achieve the “Triple Crown of Acting.” 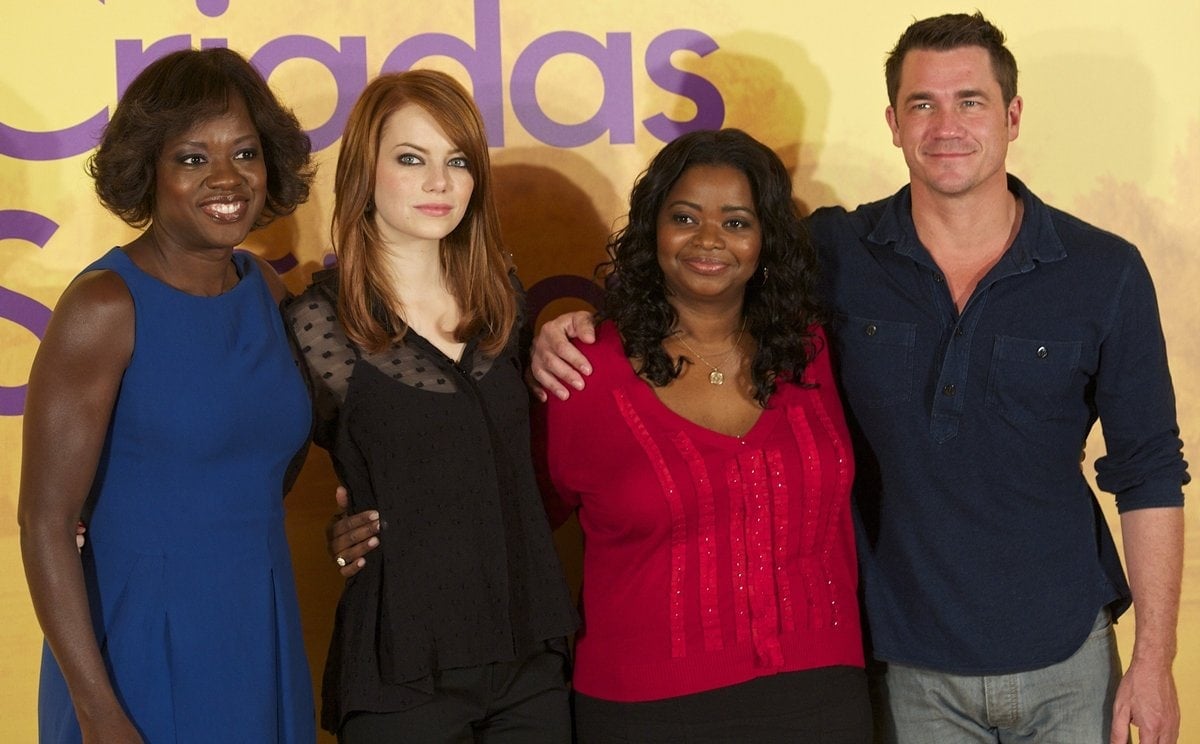 In a 2018 interview with The New York Times, Davis was asked if she had ever regretted passing on a role.

She flipped the question in order to tell the interviewer, Mekado Murphy, that she had never regretted not taking a role, but that she did regret having taken on the role of Aibileen in “The Help.” 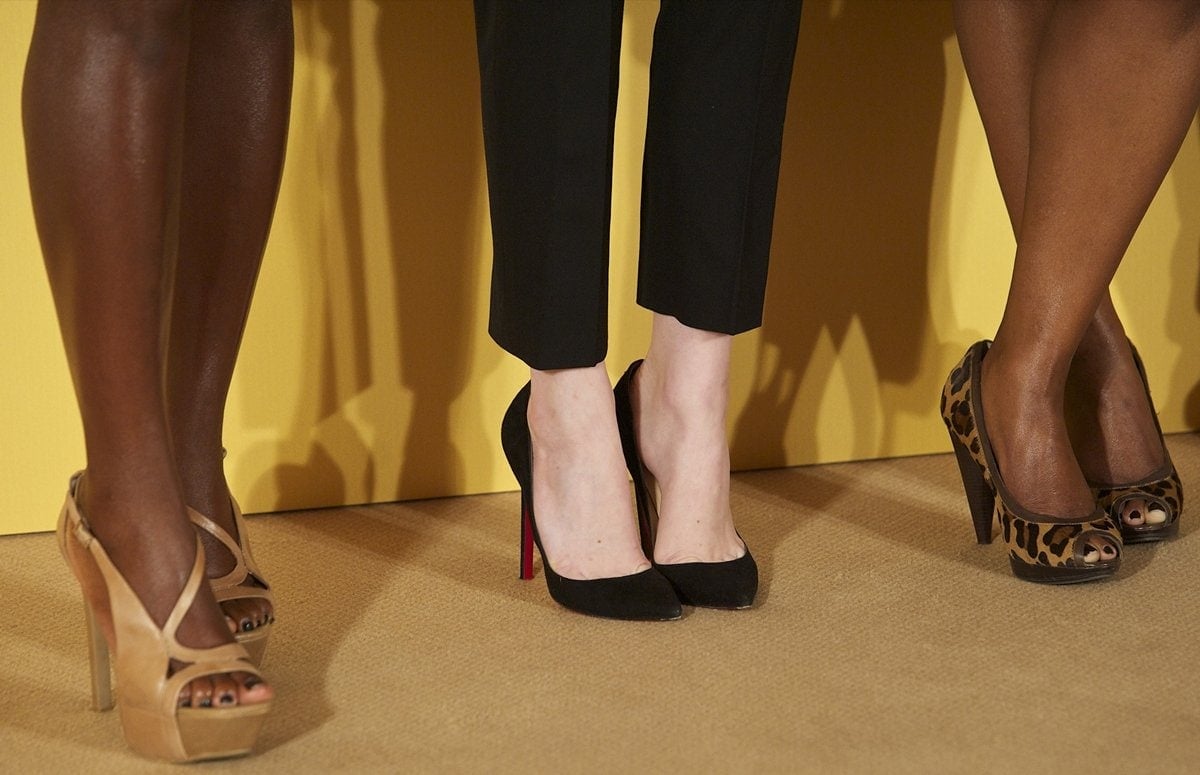 Davis said that while the friendships she formed were meaningful to her, and ones that would last a lifetime, and while she enjoyed working with the other actors and director Tate Taylor, she was regretful of how the story was told.

Davis said, “I just felt that at the end of the day that it wasn’t the voices of the maids that were heard. I know Aibileen. I know Minny. They’re my grandma. They’re my mom. And I know that if you do a movie where the whole premise is, I want to know what it feels like to work for white people and to bring up children in 1963, I want to hear how you really feel about it. I never heard that in the course of the movie.” 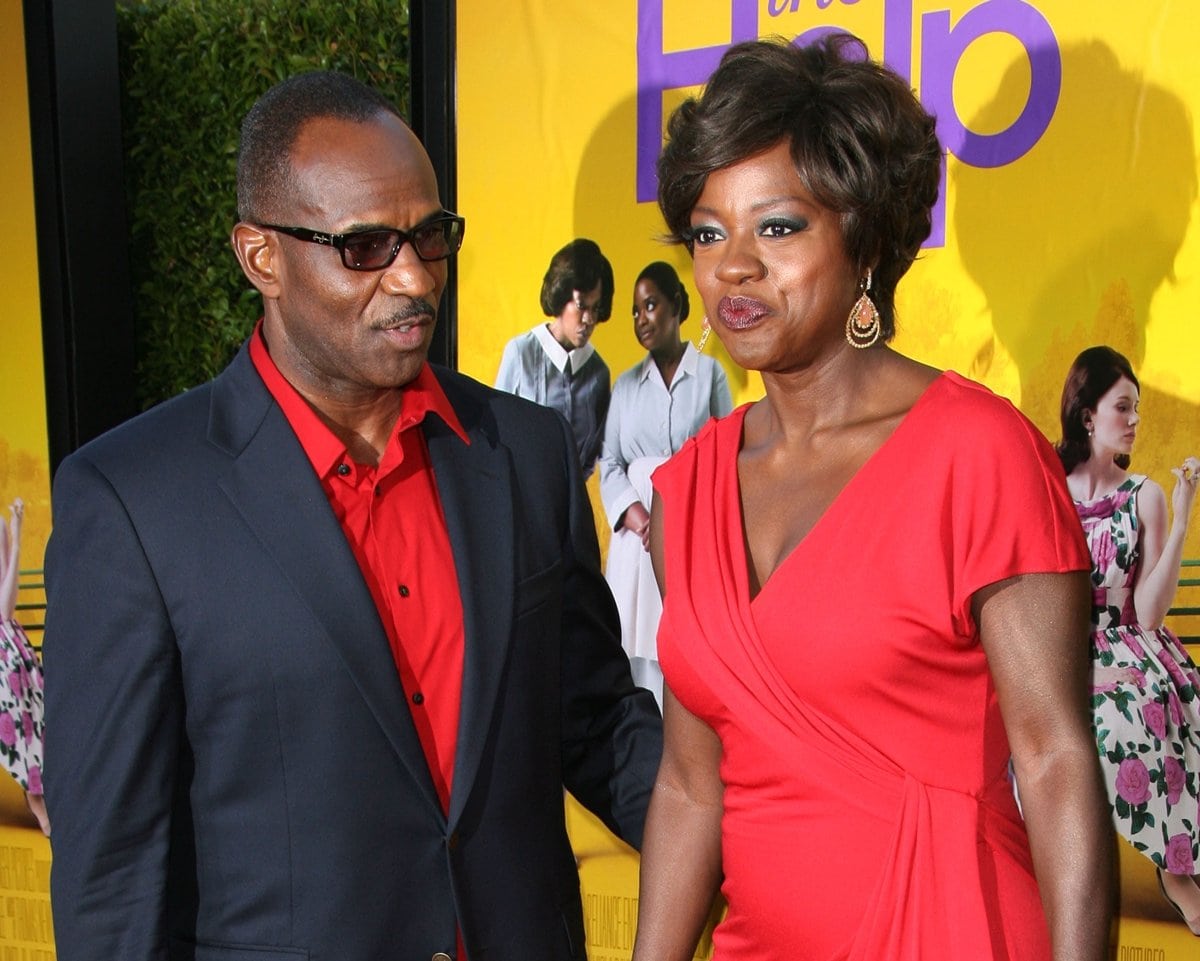 Viola Davis, along with Bryce Dallas Howard – and a slew of other critics – made sure to emphasize that while the movie dealt with themes of racism, they were told from a white point of view, and were written and directed by white filmmakers. 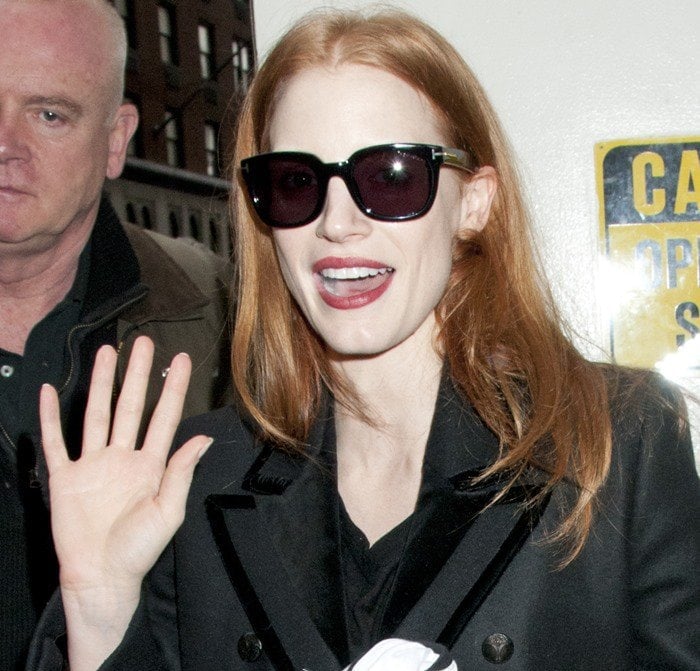 Jessica Chastain wears her red hair down as she arrives at the matinee performance of “The Heiress” held on January 30, 2013, at the Walter Kerr Theater in New York City (Credit: WENN)

Jessica Chastain gives the paparazzi a chance to snap photos of her almost every day, and we’re not mad about it.

In January 2013, the actress decided to walk to the Walter Kerr Theater for yet another performance in the Broadway show, “The Heiress,” putting on a show of stopping and smiling for the cameras along the way.

We really love that about her, especially because we know she has great taste in shoes! 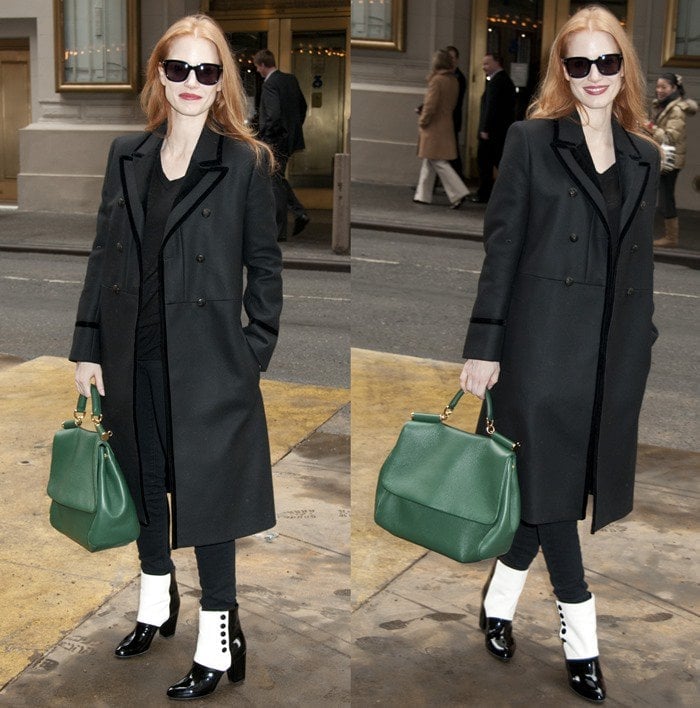 Jessica Chastain looked like the classic modern lady as she made her way to the matinee showing of “The Heiress.”.

She wore a calf-length gray coat over top of an all-black ensemble. Tom Hiddleston’s ex-girlfriend carried a large green tote and hid her eyes behind a pair of dark sunglasses.
Her vintage spats-style boots with a black-and-white color scheme are, of course, what we think really give her outfit a modern classic vibe. 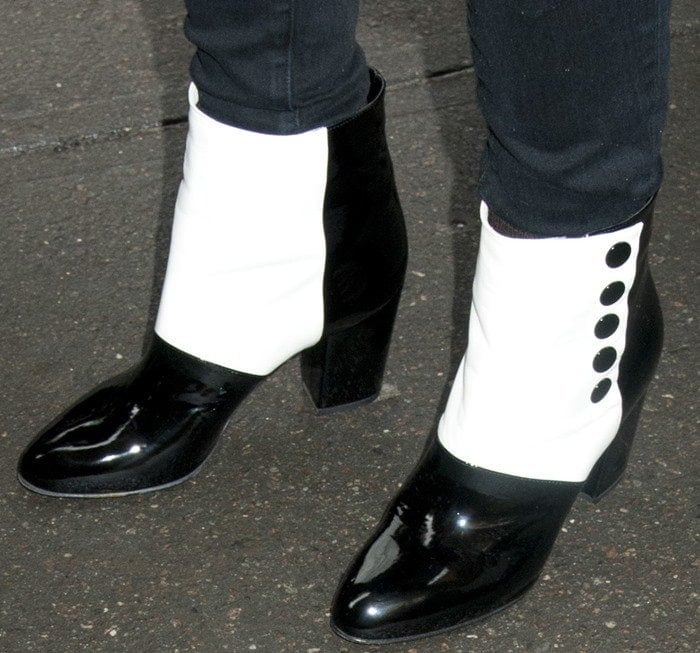 They are by Chanel and are from fall 2008, although their style dates way back further than that!

These Chanel boots are hard to come by now, but if you want to get the retro vintage look for yourself, Pleaser USA makes these very similar boots at an inexpensive price. 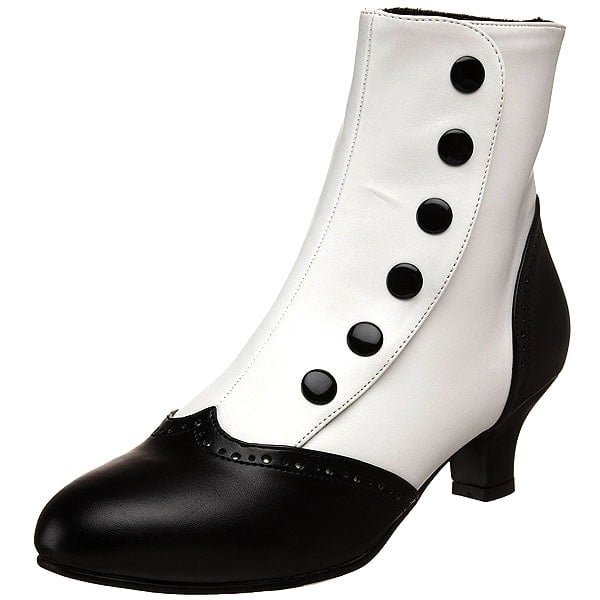 For something a bit more updated, here are two chic spats-style boots from Ernesto Esposito and Fendi. 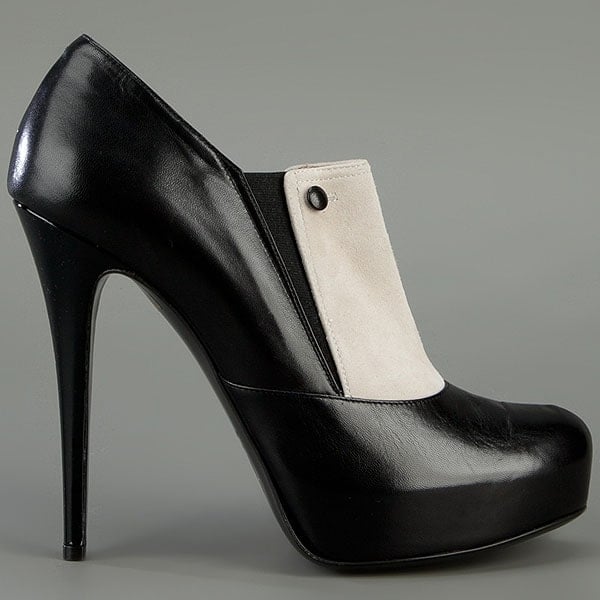 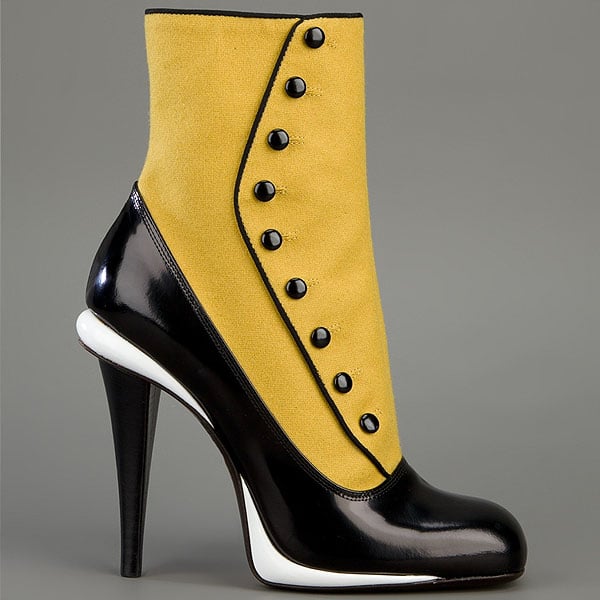